Welcome Wednesday says a hello to a new Crooked Cat author- Sue Barnard. Sue's novel won't be published till sometime early in 2014, but we can still learn a little about it just now. 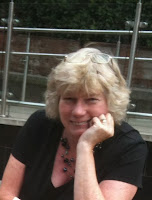 I've yet to get to know Sue, so I asked her some nosey questions, to which she gave me really candid answers...

It's very good to have you come visit my blog, Sue. I'll start with a usual question when I don't know the author's background. When did you start writing novels?
About three years ago.  But it’s taken this long to get one finished and accepted.

What's the title of the novel Crooked Cat are going to publish for you?
The Ghostly Father. I don’t have an exact publication date as yet, but I believe the publishers are aiming for early 2014.

What’s the genre of The Ghostly Father?
Historical, with a touch of “What if…?”

That sounds kind of mysterious and very intriguing. Were there any triggers which led to the plotline of The Ghostly Father?
I’ve often wondered what might have happened to Romeo and Juliet if the events of the story had taken a different turn.  In short, I didn’t like the original ending, so I wrote my own!

Aha! The romance of all romances that actually would never be published as one at this present time because it doesn't have an HEA ending (As in Happy Ever After). So, if it's your reworked version, with a different ending, who are the main characters of your story?
Romeo, Juliet and Friar Lawrence (though they have Italian names in this version).  There are others too, but it would give too much away to tell you about those here!

Keep it secret for a bit longer? Okay- I can live with that for a while, Sue. Do the names for characters just pop into your head as soon as you start a book?
Sometimes, but not always.  In The Ghostly Father some of the characters started out with different names, but more appropriate ones came to mind as the story developed.

That renaming has happened to me a few times with characters in my novels. My debut novel had a name I particularly used because, in Italian, it meant something appropriate to the ancestral mystery. Unfortunately my US publisher told me it was the name of a really wimpy character on an American serial I'd never heard of. The name was quickly changed to Luke since I wanted no taint of the wimp in my hunky hero!
How much research did you have to do for The Ghostly Father?
I had to study the Shakespeare play in great detail.  But that was no hardship as I’ve always loved it (apart from the ending!).  I also had to revise my Latin(!), research the routine of daily life in a Franciscan friary, and learn a bit of herb-lore for good measure.  And, of course, I had to go to fair Verona, where we lay our scene, and also to Mantua and to Venice, where some parts of the story are set. Purely for reasons of research, you understand.

Ah, Verona! My husband was a real romantic when we first met and he organised our honeymoon trip to Venice, Verona and Florence without telling me. He, too,  was a great lover of Shakespeare in those days.

This copy was probably bought in the early 1970s- the price being all of 35p. Since Decimal currency was launched in Feb 1971, in the UK,  I'm guessing my copy was bought quite soon after that because the year before, my much older copy had been used at college - so much it had literally fallen apart.

Sue - What about other settings? Did you include only places you’ve been to…or invent some?
In this case, the setting was decided for me.  I did use a little poetic licence in places, though!

Who is your favourite character in the book? Why?
Lorenzo (Friar Lawrence), who is the main protagonist.  I’ve given him what I hope is an interesting and thought-provoking backstory, and the whole story is told from his point of view.

That definitely sounds intriguing. What was the hardest part of the novel for you to write?
Getting started was tricky.  Once I got going, it seemed to flow fairly well.  And it helped that I already had a ready-made cast of characters.  [Nods gratefully at Shakespeare.]

What are you working on right now?
A novel which is a peculiar hybrid of crime and romance.  It’s proving rather challenging!

I know the feeling! My novel Topaz Eyes has romantic elements but is more of a thriller mystery with some criminal elements- and like you are saying about your work, mine also crosses some sub-genres.

What's your biggest writing related challenge in the coming year?
Coming up with something else which might stand a chance of being publishable!

That's a very good aim, Sue, and one I hope you have a lot of success with. Thank you for coming to visit today, and best wishes for the coming months and your launch of The Ghostly Father.

ps. Here's a wikimedia photo of Juliet's balcony in Verona. I'm pretty certain back in 1974 I never saw any signs of this tradition of posting love letters on the walls. Hubby took photographs, but in those days it was slides and sadly I don't have a copy of our visit. I do remember standing and thinking that it wouldn't be too difficult to climb up to her room, yet also glad I didn't need to try it because my feet were killing me. Tramping around the cobbles of Italy in unsuitable 'honeymoon' shoes was memorably excruciating!

I've read, though, that there are now huge fines for posting letters if you are caught.... 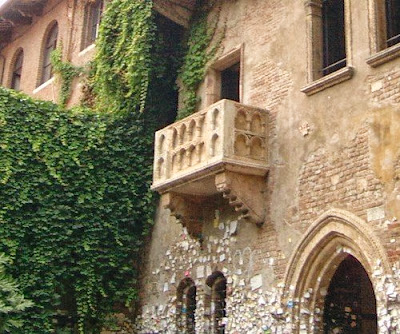