Verity's Lie - My thoughts on this Regency novel 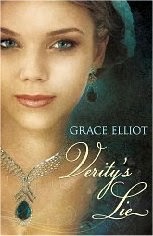 Verity's Lie (The Huntley Trilogy) by Grace Elliot
4 stars on amazon and Goodreads but....

I really want to award this book four and a half stars. I'm very picky about editing otherwise this would have been a sound 5.

The plot in Verity’s Lie sticks to very traditional lines in that the hero meets the heroine, she’s involved in a dangerous abduction and he rescues her. However, the skill of the writer makes that plot seem fresh since the pace is good throughout. The heroine is quite gutsy- even though naïve of worldly ways. I liked very much that although Verity Verrinder’s father is a repressive character, there is genuine love between them, and that any rebellion on her part was not out of spite but from a real desire to be educated. The hero’s viewpoint is skilfully divulged to the reader - we get to know Charles Huntley quite well; learn of his strengths and fears; and empathise with his feelings of failure.
I thoroughly enjoyed reading this Regency novel, and loved that the accurate historical detail of it was beautifully intertwined throughout the story. The addition of more minute detail is important to me as a reader, since it really gives a rounded overall impression of the times. By that, I’m not referring to greater description of clothing, people or surroundings – it’s in the detail that Lord Liverpool is the Prime Minister, or that Napoleon has just been exiled, or about a statue in Vauxhall Gardens. Little titbits like that give me a good time frame to plunge back into.

I found this a well written Regency novel.

What it's about:
Charles Huntley, Lord Ryevale, infamous rogue…and government agent.
In unsettled times, with England at war with France, Ryevale is assigned to covertly protect a politician’s daughter, Miss Verity Verrinder. To keep Verity under his watchful eye, Ryevale plots a campaign of seduction that no woman can resist– except it seems, Miss Verrinder. In order to gain her trust Ryevale enters Verity’s world of charity meetings and bookshops…where the unexpected happens and he falls in love with his charge.

When Lord Ryevale turns his bone-melting charms on her, Verity questions his lordship’s motivation. But with her controlling father abroad, Verity wishes to explore London and reluctantly accepts Ryevale’s companionship. As the compelling attraction between them strengthens, Verity is shattered to learn her instincts are correct after all – and Ryevale is not what he seems. So if Lord Ryevale can lie, so can she… with disastrous consequences.

I'm looking forward to reading 2 more novels in this series: Hope's Betrayal and Eulogy's Secret as soon as I can. In the meantime, I can definitely recommend Verity' lie as a lovely read.
Slainthe!


Posted by Nancy Jardine Author at 14:52