I'm delighted he's managed to come along with a guest post today, especially since The Deep Secret is being published this coming Friday (25th October), and he's presently run off his feet with all the promotional work that goes with a book launch.
If you don't know David yet you'll learn that he is a very prolific author with many new titles under his belt this past year or two, some of those penned as David Robinson, and many of those written as his other self- David W. Robinson.

David's newest novel has a little in common with one of mine, but I'll let him explain the connections...


Heidelberg: A City Of Stories
Nancy’s novel, Topaz Eyes is a mystery thriller with an air of romance. My latest offering, The Deep Secret, released on October 25th, is a thriller with an air of graphic sex and violence.
We’re both published by Crooked Cat, but there is one other factor which links the two books: Heidelberg.
Topaz Eyes opens with a meeting in a café in the heart of Heidelberg. The Deep Secret gets to Heidelberg in Chapter Two, where one of the protagonists, Julius Reiniger, steals bread from a market stall and in an effort to escape the angry shopkeeper bumps into the man who will change his life, Franz Walter.
I don’t know whether Nancy’s researches took her to Heidelberg. I was on my way there, but got sidetracked by a wife who was more interested in sun and sand than sedentary research. I ended up in Benidorm, instead.
Yet, even if I had got to the town, it would have been of little use. The Heidelberg chapters in The Deep Secret are set between the year 1927 and 1943.
Some things remain the same. The Brückentor, the old city gate, which leads onto the Karl Theodor Bridge, has guarded the city since medieval times. The present Heidelberg Castle has stood on the hillside above the town since the mid-18th century, and in its cellars, the Heidelberg Tun, one of the largest wine vats in the world, is only a little younger. 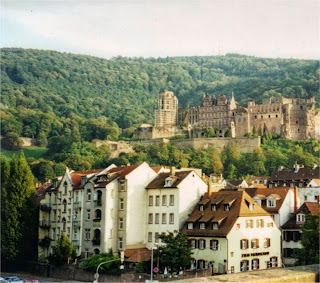 My interest in Heidelberg was neither aesthetic nor academic. Instead I was concerned with a remarkable crime which took place there between 1927 and 1934, when criminal hypnotist, Walter, subdued and controlled a young woman, identified only as Mrs E, and abused her for seven years before his capture.
So little is known about this crime that I had to fictionalise it for The Deep Secret, and as my wife pointed out, I write much better fiction when I’m sunning myself in Spain than I ever would trailing round the old cities of Germany. Arguments that we’ll never know unless I try, fell on deaf ears and we still ended up in Benidorm.
For all that my descriptive of the city is more functional than fascinating, I hope the result of my effort is as captivating as Nancy’s, but even though the books come under similar classification (thriller/mystery) they’re targeted at different audiences.
***
In the following, short extract from The Deep Secret, the young Julius Reiniger has been captured after stealing a loaf of bread. The police officer, Herr Röhm, is leading him across the Karle Theodor Bridge to the police station.

The fine, December morning was still bitterly cold, and their breath condensed into misty vapour as they marched across the bridge. The river was still shrouded in low fog, and once on the other side, Julius looked back to a fine view of the old town, rooftops, and spires striking into the clear air, and the castle keeping watch from above, like a mother hen overseeing her chicks.
“Come, Julius. We don’t have time for sightseeing.”
“Yes, sir.”
Facing them, slightly to the right, was the forbidding climb of the Philosophenweg. Weak with hunger, Julius did not relish the prospect of climbing the steeply wooded hill and was relieved when the policeman turned left, towards the town centre of Neuenheim.
They walked on past the shops and market, busier than ever in the build up to Christmas, along Ladenburger Strasse, and turned  into the residential area around Lutherstrasse. There, in one of the tiny streets, the policeman finally opened the front door of a small apartment block and ushered Julius in.
“This is the police station?”
“No, Julius, this is not the police station, and I am not a policeman.”
The boy gawped, making no pretence at understanding.
“I was not about to see you go to prison because of that oaf, when all you did was try to feed yourself.” Hurrying up to the first floor, the stranger let them into his rooms, removed his hat and coat, and hung them behind the door. He smiled grimly at the young man. “When did you last eat?”
“Yesterday. The day before. I don’t remember, Herr Röhm.”
“My name is not Röhm. It is Walter. Franz Walter, but you may address me as master.”
***
The Deep Secret is released on October 25th and will be available as an e-book or paperback. You can pre-order the paperback at http://www.amazon.co.uk/Deep-Secret-David-Robinson/dp/1909841234/
You are also welcome to join the Facebook Launch Party on Friday October 25th.

David Robinson is the alter ego of cosy crime author, David W Robinson.
A Yorkshireman by birth, David is a retired hypnotherapist and former adult education teacher, now living on the outskirts of Manchester with his wife and crazy Jack Russell called Joe (because he looks like a Joe).
David writes in two distinct genres. As David W Robinson, he produces the light-hearted, cosy crimes of the best-selling Sanford 3rd Age Club mysteries series. Writing as David Robinson, he also turns out much darker material; psychological thrillers such as The Handshaker or Voices which border on sci-fi, paranormal or horror.
A devout follower of Manchester United, when he is not writing, he enjoys photography, cryptic crosswords, and putting together slideshow trailers and podcast readings from his works.

Thanks for visiting today, David. My very best wishes for a great launch of  - The Deep Secret. You're little snippet is very intriguing!
Slainthe!
ps Yes, David- I've been to Heidelberg more than once and absolutely adore the old city.
Posted by Nancy Jardine Author at 08:05