Wednesday greetings to you!

Before Beltane is now well and truly launched in both paperback and eBook formats, available from Amazon and in paperback from bookstores like Barnes and Noble, Waterstones and WH Smith. Paperbacks can be ordered via other independent bookstores.

I'm delighted to announce that it already has a couple of good reviews and that is a really great start. Reviews are not easy to acquire, so I'm very very pleased when any appear.

Here are the first 2 on Amazon - one for the eBook and one for the paperback version (identical reading).

"The Prequel to the Celtic Fervour Series by Nancy Jardine is a very enjoyable read which takes the reader back to the early years of the first century AD in Iron Age Britain before the full Roman invasion of Brigantia. The book gives an early sense of the Celtic people and has something for every reader of historical novels."

4 Stars  - Historical Fiction at its Best

"In this prequel to the Beltane series we are shown into the lives of Lorcan and Nara and their adventures before they meet. Once again Nancy Jardine builds a clear detailed , well researched picture of life in Britain , with tribal differences and Roman invasion. The lives of Lorcan and Nara are ruled by their positions in society, cultural and spiritual rules. A thoroughly enjoyable read."

I need to spend some time tomorrow in making some more promotional material. It's a tough job getting any reviews so it's very good that I enjoy making the promotional posters. 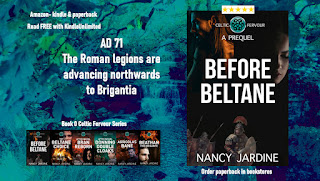 Posted by Nancy Jardine Author at 22:11 No comments:

Welcome to Day 30 of my April daily blogs to do with the writing of Before Beltane.

Beltane is in the titles of 2 of my Historical Fiction Celtic Fervour Series, though why Beltane? (alternative spellings may be: Bealtaine/ Beltain) 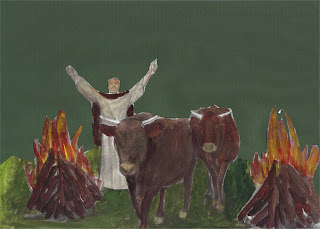 Beltane literally means shining/bright fire, and the Beltane festival has a central fertility theme. Beltane, the end of spring festival, is celebrated roughly half-way between the Vernal equinox and the Summer Solstice. The festival traditionally marked the arrival of the summer, Beltane being one of the larger and more important Celtic festivals. Imbolc heralded the Spring; Beltane the summer; Lughnasadh the autumn and Samhain the winter.

It’s believed by some historians that the Beltane festival was celebrated on the day that the group of stars named the Pleiades appeared on the horizon, at sunrise. Nowadays, it is celebrated by neo-pagans and interested onlookers on a fixed day, the 1st May. You'd need to be up pretty early in my part of the world, to know if that happens this year on the 30th April into the 1st May! Googling it tells me it should happen at 05:21 hrs.

For the Ancient 'Celtic' Iron Age tribes of Britain, the rituals of Beltane heralded a time of optimism and hope that the coming seasons would be fruitful for the land, the animals and the people. Abundant crops and productive animals were crucial to survival, living off the land the way of life for them as most Celtic tribes were basically farmers. The rituals of the festival were therefore designed to encourage successful growth for the animals and crops. Driving the animals through a 'fire-corridor' was designed to purify them, and to rid them of potentially deadly disease. Fertility of the tribe may also have been an important feature of this particular festival. I leave that bit to your imagination.
My late Iron Age tribal characters in the Celtic Fervour Series celebrate Beltane when they can – though the invading Roman Legions spoil their festivals on quite a few occasions over the duration
of the series which span a generation!  Beathan of Garrigill, who is the main character in Book 5 of the series, is the amazingly capable son of Lorcan and Nara. Spoiler alert here would be that Bethan is conceived during a Beltane Festival in Book 1. You can work out why this current Prequel to the series is called BEFORE BELTANE and Book 1 is called THE BELTANE CHOICE. 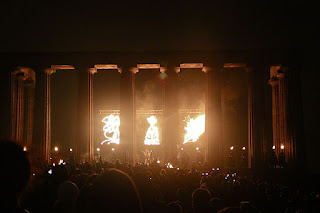 Tonight into the 1st May 2022, will see a re-start of the Beltane Festival on Calton Hill, Edinburgh, Scotland,  after having had to go online due to Covid restrictions. I've never been to view it, but obviously would love to be there.

You can buy Before Beltane  HERE since it really is properly launched now!

Posted by Nancy Jardine Author at 07:46 No comments:

Launch Day for Before Beltane!

Welcome to day 29 of my series of blog posts in April that have something to do with the writing of Before Beltane.

Today really is launch day for what is effectively Book Zero of the Celtic Fervour Series - Before Beltane. It's a busy day since Before Beltane is being featured on some blogs, for which I thank the blog blog owners very much. 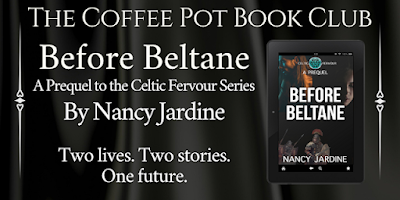 You'll also find a different post about the reasons for writing the Prequel on my wonderful friend Cathie Dunn's Ruins and Reading blog  She's an absolute star since she has even made a fantastic new banner for my visit! But you need to hop on over to her blog to see it, so click that link! 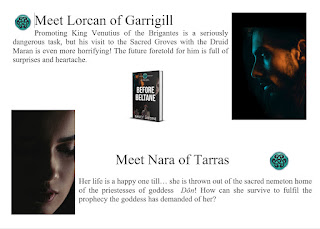 The day has flown past in a flurry of making some new promotional material to use online, but since my Before Beltane paperback copies are about to have a very first outing at the FOCUS Craft Fair at the Garioch Heritage Centre in Inverurie, my local Aberdeenshire county town, I've been making some posters to display there as well. 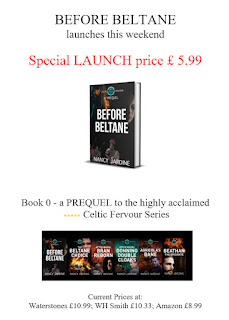 I have lots of spanking new copies of Before Beltane, for those who can take up the special paperback price - just for tomorrow!

Posted by Nancy Jardine Author at 17:13 No comments: