Familiarise Friday's two for you! 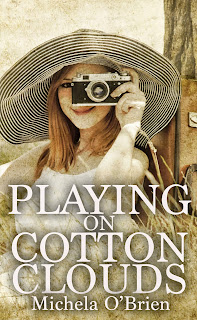 Familiarise Friday interviews not just one character from Playing On Cotton Clouds by Michela O'Brien - we have two of them to get to know today!

Hello to both Seth and Livy! It's a little while since I read this fantastic novel (Crooked Cat Publishing) but these two are really excellent to read about.

I'm going to try something never before attempted. What follows is a mingling of two separate interviews. Neither of these characters knows that the other is being interviewed far less that their answers will appear on the same page! Livy will answer in this colour. And Seth's will be like this.
I'm wondering if there's any compatibility? Let's see what you think...

Livy- How would someone close to you describe you? Stubborn, strong-willed, independent, caring, altruistic and forgiving.
Seth - Describe yourself using only 6 words. Introverted, pessimistic, messy, insular, cynical and creative.


L- Who is the person you most admire/ love?  And what makes that person so appealing? I’ve loved my friend Seth since the day we met, when I was just thirteen and he a couple of years older. It’s his vulnerability that attracts me to him.
S- Describe the woman you admire most in the world. I never got over my first love, Tara. Every other woman in my life had to measure up to her and they never succeeded, with one exception, and that’s my best friend, Tara’s sister Livy.
L- What do you hate about the place you are currently living in? The town where I come from is very small and provincial and its inhabitants can be very narrow-minded. I was very happy to move to London, though the downside is that in a big city you can become lost and invisible to people.

S- Where are you currently living? I’m from a small provincial town in the Midlands, but have lived in different places – Amsterdam, London, New York…London will always be my natural home, though.


L- What do you like best about your lifestyle? I love my independence.


S- If you had leisure time in the evenings or weekends, who would be the ideal companion to spend that time with. Again, I’d rather be on my own. Otherwise, probably Livy. She’s one of few people that puts up with me and my moods.


L- What’s the most satisfying thing about your job? I like being creative and as an artist I can really put my soul and imagination into what I do.


S- What’s your main occupation just now? I’m a writer and a columnist.


L- As a teenager, how did you view your future? What did you hope to be doing that hasn’t yet transpired? I don’t think I had a very clear vision of what my life would be like, when I was a teenager. I suppose I saw myself as becoming a famous artist, while in reality I got into designing. And I always dreamed of that one love that escapes me.


S- What leisure pursuits would you love to indulge in? People watching.


S- Okay. What aspects of your life are the worst, in your opinion, right now? Next.


S- What new cuisine would you like to try? I’d try anything, really. I’m not fussy and am naturally curious.


L- What's your favourite way to travel? I like the train. It’s a very civilised mode of transport and you get to see the world at more relaxed pace.
S- Who would be your ideal holiday companion if you took off on a sudden unplanned trip? Why would that person be the best one to accompany you? Funny you should ask that. I’ve been on a trip with Livy and she was a perfect companion… until we had a stupid falling out. Truth be told, I’m not an easy companion and more at ease on my own.


Quick answer section. Which do you like best?
SWEETS or FRUIT? Fruit NIGHT IN or OUT? In  CITY or COUNTRYSIDE? City


FOOTBALL or READING? Reading  READING or WALKING? Both WALKING or SKYDIVING? Walking TRAVEL or HOME? Travel BARCELONA or MAGALUF? Barcelona. Or Madrid. PUCCINI OPERAS or RIHANNA? The Smiths REGGAE or ROCK? Both

Wow! That was fun! Thank you Livy and Seth for such great answers, and my thanks to Michela for bringing them along to the blog.

What do the readers think? Is there any chance these answers could lead to a more developed relationship? Tell us what you think!

When arty Livy falls for her sister’s boyfriend, she knows her dreams are unlikely to come true… Sensitive Seth thinks he has hit the jackpot when the girl of his dreams finally looks his way… While laidback Aidan is every girl’s hero.
Fast forward twenty-five years as carefree youth turns into adulthood responsibilities, relationships begin and end, music and fashion change, and life moves on with its successes, failures and heartaches. As the friends grow up, they discover life rarely turns out the way you imagined it at fifteen.
The rites of passage through years are eerily familiar to every 1980s teenager in this moving, heartfelt novel.

A little about Michela O'Brien: 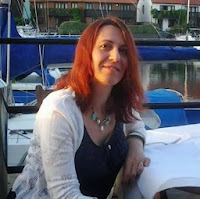 Michela O'Brien was born in Milan, Italy, where she grew up, studied, worked as a teacher, made friends and wrote, commending thoughts to page, imagining plots and characters, recording events in her life, noting observations about the world: stories, diaries, letters... In an era before personal computers, internet, blogs and social networks, it was pen and paper and she still carries a notebook and a pencil with her to sketch ideas on the spot.

She moved to England in 1994 and lives at the edge of the beautiful National Park of the New Forest with her husband and two sons.

Her greatest inspiration are ordinary people and real life stories and her novels and short stories centre on themes of friendship, love, coming of age and self discovery, human emotions and experiences everyone can relate to.

She has written two novels: Playing On Cotton Clouds (2012) and A Summer of Love (2013), both published by Crooked Cat Publishing

Here's a little sample from Playing on Cotton Clouds:
Seth flicked the lighter on and off. “I’m dying for a cigarette, do you mind if I go outside for a minute?”
“I was about to sign and leave, actually. I promised Scott I’d be home for dinner. He’s cooking.” [Livy said]
“Man of many talents.” Seth kept the cigarette glued to his bottom lip as he spoke. “I think I’m done too. I have what I need for the magazine, including some hot gossip, thanks to you.”
“Ah, glad to have been of assistance.” Livy laughed.
“By the way…”
“Yeah?”
“How’s your sister?”
Livy’s words died on her lips, as she repressed the urge of commenting she had been asking herself how long it would be before he enquired about Tara. She studied his expression closely, looking for clues on his feelings, but he remained impassable.
“She’s very well, thank you.” She hesitated before casually dropping the grenade. “Perhaps I shouldn’t say it, as official invitations have not been sent out yet, but she’s finally getting married next spring, after all the delays due to James’s mum’s bad health.”
“Is she?” Seth removed the cigarette from his mouth and Livy wondered if the news had detonated at all. He seemed unaffected by any explosion. “Nightmare for you.” He joked. “You’ll have James Douglas-Smith for brother-in-law.”
“Don’t remind me.” Livy rolled her eyes. “And a Tory as well.”
“Is he a minister yet?”
“Assistant to our local MP, for the time being, but I’d give him a couple of years to replace him.”
“That’s a scary thought. I definitely need a smoke now.”
Seth let his gaze wander around the room, as if absorbing the last few details before walking out of the exhibition for good, and Livy couldn’t help noticing a familiar shadow in his eyes. She had seen it before. It was there the day they had met again at the bridge, four years before, after she had heard about his illness. She had found him pale and thin, but in better spirit that she had imagined, as he did his best to rebuild his life. It was there the day they had travelled to London together, sharing a train journey as she returned to Goldsmiths for her final year and he moved on to his new job. And it was there at Tara’s twenty-first birthday party, when Livy had dried his tears and they had ended up spending the night together.
As she took in the sight of him absentmindedly fiddling with the cigarette, the memory of that night played vivid and present in front of her and a sudden rush of nostalgia engulfed her, filling her mind with what ifs.
“I’m going outside.” He turned to her, the cigarette back in his mouth. “Are you coming?”
“You go ahead. I’ll just sign the book and join you.”
“Tell you what, if we share the cab, I’ll chip in for the ride to Shepherds Bush and you can just pay from there to Chiswick.”
“That’s very kind of you, thank you.”
“I’ll wait for you outside, then.”
“Won’t be a minute.”
Livy watched him walk out of the gallery and caught a glimpse of him standing on the pavement by the large front window, as he lit the cigarette in the blue air of dusk and took in a puff, exhaling the smoke with a relieved and thoughtful demeanour. She wondered if he was thinking of Tara or Nicole or the novel he would like to publish one day, something beyond Andromeda’s War. Maybe he was just gathering ideas about the exhibition or maybe he had just cleared his mind and was thinking of nothing at all.
And maybe, just maybe, he too was going through their conversation and a few what ifs of his own.


I've read Playing On cotton Clouds and I highly recommend it as a great read. Thank you, Michela, for visiting today and best wishes with your Crooked Cat novels.