On the blog today is Alison Henderson, an author I've met via The Wild Rose Press. She has a great story to tell us today about her latest novel, a contemporary romantic suspense - Unwritten Rules. 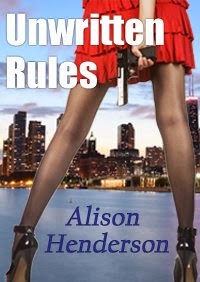 Hello, Alison. It's lovely to have you visit. You've got quite a story for us, so over to you...

A Great Big Bundle of “Firsts”
By Alison Henderson

Nothing about 2013 has been usual or routine for me. Since January, I have literally turned my life upside down. After more than thirty years in the insurance business, I took early retirement at the end of last year. My husband and I moved from snowy Minnesota to the sunny California Coast at the end of March. We bought a wreck of a house with a fabulous view and set to work remodeling it from the studs out. In addition, I decided to stretch both sides of my brain and self-publish my fourth book instead of sending it to the small press that had published the first three. To top it all off, this new book marks a genre switch for me, from western historical romance to contemporary romantic suspense. Whew!
My primary impetus for diving into the murky waters of indie publishing was the desire to design my own cover. Ever since I began writing Unwritten Rules, I’d had a vivid picture in my mind of exactly what I wanted on the cover. That had never happened before. For each of my first three books, I’d had enough of an idea to complete the questionnaire for the cover artist, but I’d never had a fully formed vision. The cover for my first book thrilled and delighted me as few things ever have. The second was a bit of a let-down. And the third had almost nothing to do with the story. I wanted so much more for this book.

When I decided to retire early I knew I wanted to devote more time to writing, but I also wanted to branch out and learn new things, so I decided to learn to use Photoshop to design book covers. I’ve now done four covers for an author friend and this cover for myself. I majored in Art History in college and love the opportunity to create visually as well as verbally. For this book, I even learned how to format for Kindle and paperback. I’m happy to be living proof that you can teach an old dog new tricks.

I agreee with you about the new tricks, Alison. We, authors, need to learn so much more than writing and I really need to pick your brains about all those fantastic  things that you've done to create such a great cover.

Alison -That was quite a shift of climates! I've visited Minnesota, but it was in late August through early September and the fall colours were beautiful. I've also been to California a couple of times and have driven on both the inner highway from San Francisco down to Los Angeles and back up on the coastal route which was a very memorable drive- that was in July, and very very hot! On my last California visit, my family and I made a road trip from Los Gatos, near San Francisco, up to Vancouver. We left Los Gatos on 27th December and got to Vancouver on the 31st December. It was very cold and snowy in the northern parts which were absolutely beautiful.

Thank you for telling us your background to Unwritten Rules.


http://alisonhenderson.blogspot.com
But back to Alison's Unwritten Rules. Here's a bit about it:
Things aren’t going Madelyn Li’s way. Her bodyguard agency is teetering on the brink of bankruptcy, her grandmother keeps hatching plots to marry her off, and someone is trying to kill her latest client. All she wants is to safely escort thriller writer and former CIA agent Carter Devlin on his cross country book tour and collect her check, but two obstacles stand in her way: a shadowy assailant and her own growing attraction to her dashing client.

Carter Devlin has agreed to accept the beautiful and determined Ms. Li as a bodyguard primarily to appease his publisher. After all, who would want to kill a beat-up, retired ex-spy on a book tour? But when the attacks turn deadly, he soon learns there’s more to Madelyn than a pretty face and tempting body. Will the spark become a flame before a killer snuffs it out?

And here’s a teaser excerpt from one of Alison's favourite scenes:

“Come here.” The words hung between them in the still night air.
“I’m fine where I am.”
“I’m not. I need you closer.”
“I told you before—”
“I’ll be a perfect gentleman and keep my hands where you can see them.” He tapped his fingers on the rim of the spa.
Did she dare? Go on. Do it. Her pulse fluttered. She glided through the water like an otter, stopping just beyond arm’s reach.
“Closer.”
“Why?”
“I want to kiss you.”
“With your hands up there? That won’t be easy, even for you.”
“I don’t need my hands to kiss you. Of course you’ll have to do most of the work.” Challenge glittered in his eyes.
His proposition tantalized her. Emboldened, she drifted closer. “Close your eyes.”
He did as she ordered and waited. She touched his lips with a kiss as soft as dandelion fluff. When he tried to respond with more pressure, she floated out of reach. He stilled, and she returned, warming his cheek with her breath. Then she pressed a kiss to his earlobe.
He growled and gripped the side of the tub. Her breath caught in her throat. Had she pushed him too far? What was it Grandma Li used to say about teasing a dragon?
But Carter didn’t roar, and he didn’t bite. He waited.
Just one more. Then this madness must stop.
She returned to his lips and allowed herself a long, slow kiss. He met her halfway, and she didn’t back off. But kissing was difficult with nothing to hold onto. Before she could stop them, her hands grazed his ribs. The muscles tightened beneath her fingers, and she sucked in a sharp breath. She shot out of the water, snatched her robe, and wrapped it around herself with shaking hands. She’d come so close to risking everything.
His eyes flew open. “What are you—”
“No complaints. You got what you wanted.” She silently cursed the waver in her voice. She needed to stay strong, now more than ever.
“Not even close.”
“I stand corrected. You got what you asked for.”
“I’ll have to be more specific in the future.”
“I’ve told you why we can’t get involved. It’s not my fault you refuse to believe me.”
“You and your precious rules.”
“My rules keep everyone safe.”
“Safety can be overrated.”
“Not in my line of work.” She tightened her belt with a jerk.
“We’re not talking about work.”
“Yes, we are. Now get out of that tub before you turn into a lobster and go to bed.” She shoved the heavy glass door aside and headed for the bathroom.

Thanks so much for having me today, Nancy. It’s always a pleasure to visit you. And to everyone else, I invite you to visit me at my homes on the web.