The Influence Of Art In Topaz Eyes

Precious jewellery features more than painting in Topaz Eyes, but the most mysterious object to be uncovered is a piece of early Dutch artwork. My decision as to what that might be, while I was creating the mystery of Topaz Eyes, was directly influenced by my love of Dutch and Flemish art – though it took me a while to decide what. 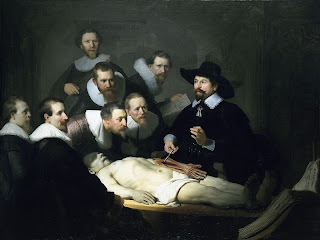 A long time ago a school friend of mine spluttered that he couldn’t see what I loved about Dutch and Flemish art of the Golden age since, to him, it was full of dark dismal scenes. I totally disagreed then, and I still disagree now. However, he could have been forgiven for his opinion on this Rembrandt painting, which in a way is related to my Topaz Eyes blog article about Edinburgh. (Please follow my Topaz Eyes Tour Guide to find out where that particular article is posted during my mini-blog tour.)


This painting was considered quite gruesome in 1969, not so in today’s more graphic times, yet was so pertinent to the developments during the golden age.


Although I do like The Anatomy Lesson of Dr. Nicolaes Tulp, I’m more partial to the paintings by Rembrandt which depict the venerable burghers of the time with all their understated, yet pompous, detail.

A decade after leaving school I was very fortunate to live in Holland. At the time I couldn’t drive but had access to a bus right outside my house which took me to the centre of Amsterdam. What drew my interest there? The architecture was spectacular and I wandered around taking my fill of it, but I also went to every possible art gallery and made friends with many of the exhibits.

In the centre of Amsterdam is the huge Rijksmuseum, the largest museum in the Netherlands –a spectacularly beautiful building that’s full of varied works of art. There are paintings a-plenty in it, but there are also wonderful collections of Delft ceramics, textiles and many other art media. Some of the works are huge, some medium sized and many are extremely tiny – and, in particular, miniature paintings and cameo jewellery used to catch my eye.

Some featured famous people, and though I may not have loved the associations attributed to the person depicted it was fascinating to study the miniature to interpret what was in the expression or demeanour. 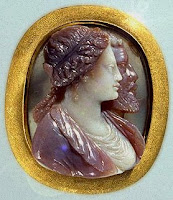 What made Lucrezia Borgia - Wikimedia Commons such an evil person. Was it in her own 'make-up', that strong nose and calculating eyes? Or was her reputation earned due to influences by the family around her? In this miniature I do think her eyes demonstrate a cold and deadly focus.

Sometimes the whimsical nature of the miniatures appealed to me, an example being that some of those Dutch painters that I so admired paid another artist to make miniature portraits of them. The one below is of the famous artist Hans Holbein painted by someone who was lesser known. 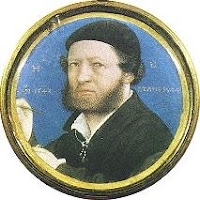 Low Countries artists like Vermeer, Frans Hals, Rembrandt, Pieter Bruegel and other artists of the Golden Age are represented in the Rijksmuseum. I spent hours and hours gazing at the paintings and imagined the people represented living behind the doors of the many Amsterdam houses that I walked past to reach the museum. Having made trips to the tourist sites of Holland, the works of Pieter de Hooch made sense as I could envisage the people in the little houses I’d seen in Delft, the typical checkered-tile flooring still able to be viewed in many of the tourist spots. 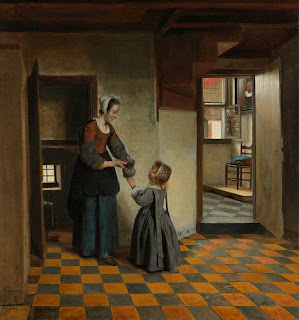 I love looking at the genre paintings that reflect daily life of the fourteenth, fifteenth and sixteenth centuries in the Low Countries. Those, to me, are the realisms of the age, but there are also some spectacular surprises that were painted way back then, the images so ‘out of their time’ they are incredibly memorable. 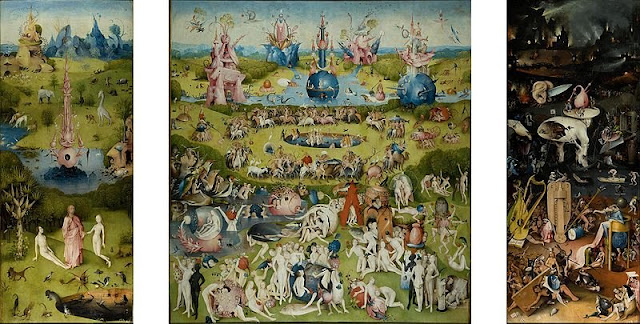 I could spend hours looking at The Garden of Earthly Delights - especially the right hand panel of the triptych. I even had a wall poster of it hanging in my house for quite a while. There is so much detail there, so imaginative and it has to be said, full of dire consequences regarding the excesses of life.

Another painting that has captured my imagination for a very long time is by another Dutch/ Flemish artist – Pieter Bruegel the Elder (1526?-1569). His work has always seemed to have less of the fantasy to me, and more of the satirical. The excesses of gluttonous eating and drinking are almost humorously portrayed in Land of Cockaigne, the drunks sprawled around the foreground, completely out of it. My most favourite Bruegel painting, however, is The Hunters in the Snow.  There is surrealism to it, a bleak coldness that’s so evocative of a winter’s day. The mid grey lowering sky is reflected in the icy water, the snow throwing up a perfect cool contrast. 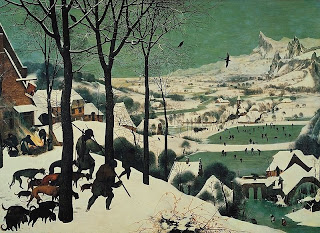 But, as I said the Amsterdam museums are not only full of large oil paintings. Some of the most famous paintings are relatively small and some famous works of art are very tiny indeed. In addition to the Rijksmuseum there was the Van Gogh Museum and other smaller galleries I could visit. Each featured particular types of artwork, again capturing my imagination.

A love of Dutch genre art was well fed during my time in Holland. I would never have guessed way back then that I’d use that experience in an unusual way many years later.

You’ll really need to read Topaz Eyes to know exactly how I use Dutch art in my novel.