I've been busy reading two novels written by a fellow Wild Rose Press author - Christine Elaine Black. Today I'm sharing what I thought about the first in her series of historical romances called 'Maximus'. Tomorrow I'll post my review of 'Taurus' on my features blog. 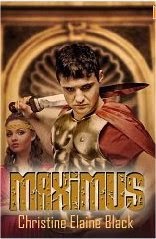 Carissa Valeria distrusts the handsome soldier who rescues her reckless son from plunging to an early death. Recalling the man's heartless treatment of her from years ago, she itches to even the score, but her son hails the rescuer as a hero. When he becomes her neighbor, her son's friendship with the soldier threatens to uncover old secrets and place her family and her heart in danger.

Exiled to the countryside by the Roman emperor, Maximus Octavius is confounded by the brittle countenance of the woman he's willing to befriend. She's afraid, and he's determined to find out why. But helping Carissa and her son means confronting the guilt of his long-forgotten past and stirring the silenced passion in his heart.

Can Maximus win Carissa before fear and revenge tear them apart forever?

My thoughts on reading Maximus:

This was a quick read, taking the reader back to an era I love to read and write about. The flavour of Ancient Rome is there, although the detail is light. The premise of a lengthy exile for Maximus, banned by the emperor of Rome, is an interesting one. That he must come to terms with his past, and fight to earn the love of Carissa, is balanced by the friendly relationship that develops between Maximus and her son. Does Carissa really hate her new neighbour? She does have some cause, I think!
The plot was simple, as was the lifestyle depicted in most of the novel. Some faces are unforgettable, but others maybe less so. Carissa hasn't forgotten him or the consequences of their previous meeting but Maximus is a different story. It's very human to want to bury past misdeeds to the far recesses of one's memory, but in his new exile Maximus is forced to make him connect those past dots.

There were some aspects of the novel I would have liked to have been developed further. I'm a history lover, and would have loved more specific details of that Roman era since there were significant differences between earlier periods and later ones.

On my Features blog, today, there's a review of 'Beneath the Skin'  - Book 1 of the Wolf Within Series by Amy Lee Burgess.
An author interview with Amy
An excerpt from Beneath the skin
***Amy's GIVEAWAY***
Hop over to visit by clicking HERE.