Interview time for me!

Happy Saturday to you!

This past week has vanished in a flurry of house and garden massive tidy-ups. Thorough spring cleaning (shampooing) of carpets has taken me ages but at least when I've sat down at my keyboard I now know those tasks won't be nagging at my shoulder.

Just for something different,I'm off today to be interviewed at the lovely Pam Lecky's 'Vintage Treasures' blog. If you don't know all about me yet, now's your chance! Join us HERE

Having cut my lawn grass for the first proper cut of the year this morning, I've had lunch so I'm now off to do some sprucing up of the grand children's climbing frame. A quick wipe down to remove the yucky bird poop, followed by a swift sanding down of the wood then a couple of coats of wood preserver/varnish. How long will that take me? Mmm...probably more than the hours left of this afternoon so my new writing will have to be much later.

I'm also now fine tuning the preparations for a big party next weekend for someone near and dear who is now - can I believe it? - 70!

Wishing you a fine weekend.

Slainthe!
Posted by Nancy Jardine Author at 14:46 No comments:

If you are celebrating Easter Sunday have fun...and if you're not, have fun as well! 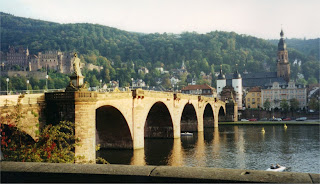 I'm out visiting one of my Crooked Cat author friend's blog this Sunday morning. Jennifer C. Wilson has a Sunday theme called 'Sunday Sojourns'. I've popped in before and talked about a little stroll to Bennachie with regard to all of the Ancient Romans who visited its slopes a couple of thousand years ago- those in My Celtic Fervour Series.

Today, I'm talking about the fabulous little city of Heidelberg in Germany, a place I love to visit. It's one of the settings that I've used in Topaz Eyes, my contemporary mystery thriller.

Hop over to Jennifer's blog HERE and read what I love about Heidelberg and why I chose that location.

On another note the Crooked Cat Easter Sale continues.

All of my Crooked Cat titles are 99p/99c across the Amazon network for one more day 14th -17th April.

I did sell some copies of Topaz Eyes on Friday during my 'Booksends' promotion but I don't think they nearly paid for my outgoings. I'm off to ask my publisher for some sales figures, if it's not too soon to work them out. Updates later on that.

Slainthe!
Posted by Nancy Jardine Author at 09:23 No comments:

Happy Saturday to all! 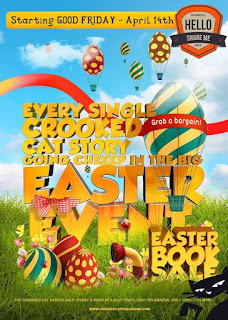 For some it's Easter Saturday and for others it can be just as special. especially if you're a reader. The Crooked Cat Books Easter #SALE continues with all of my CC titles reduced to 99p/99c equivalent across the Amazon network.  (Clink that link to see them)

Even if you've no time to read them just now, it's a great time to pick up a bargain.

For this event, I took the plunge and paid a whack of my hard earned profits from my physical paperback sales at my 2016 Craft Fair Venues. I'd not heard of a book promotions outfit named 'Booksends' but I thought I'd try it. Approx. 100 dollars is out of my budget for all of my CC titles but I decided to throw the cash at Topaz Eyes and see how it would fare. I paid for a one day slot where 'Booksends' send the information and links for Topaz Eyes at the reduced price of 99p/99c to their huge email list of readers who are nominally interested in reading particular genre categories like mystery thrillers. 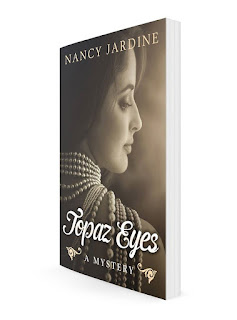 The 'Booksends' email went out on the 14th April so as I write this at almost 10 a.m. UK time the west coast of America are only just settling down to bed. I'm hoping that there will be a continued trickle of sales of Topaz Eyes over the next 2 days with readers taking a chance that the book will still be at the reduced price. It should be 99p/99c till Monday morning(17th). Fingers crossed.

It will be amazing if the feature runs into profit since it was quite an expensive add for me. However, if it boosts the novel on the Amazon charts it might be picked up by other readers in some way I don't understand, or know of, but I'm told a meteoric rise in Amazon charts can trigger lots of mysteries!

So far I've sold some copies during my 14th April but it'll take a lot more to cover my costs. C'est la vie.

Gaining more readers is the ticket and if they like my writing they will hopefully try my other novels.

Slainthe!
Posted by Nancy Jardine Author at 09:58 No comments:

Crooked Cat did it again! 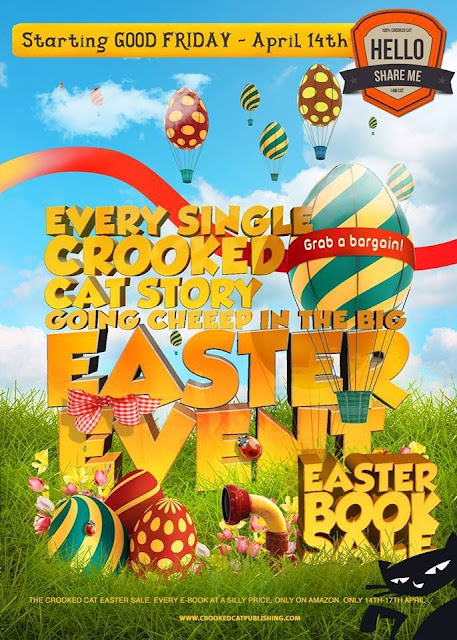 For some people it's their religious Good Friday

Crooked Cat Books has designed this fabulous poster for me to share.

All of my Crooked Cat Published books are available at 99p/ 99c across the Amazon network.


This link HERE
should take you to my Amazon Author page where you can click through to my novels - or you can use the sidebar on the blog.

If you'd like a change from my contemporary or historical novels then Crooked Cat Books publish an amazing array of genres. You can use this link HERE to browse through their titles available on Amazon. There has to be something you'll love and get it at a bargain, even if you're not able to read them just now.


Posted by Nancy Jardine Author at 09:23 No comments:

Mellow yellow and all that... 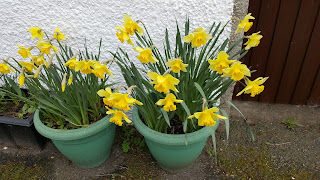 What do you do when your ideas seem thin on the ground?

This afternoon was not as productive as I wanted with my writing and when that happens I need a distraction. The day was cloudy but it wasn't supposed to rain (according to local weather reports) so I decided to do a spot of necessary weeding around and about.

However, it seems that procrastinating extends beyond a new writing hiatus because the minute I was outside I thought it would be a great idea to have a daffodil count. 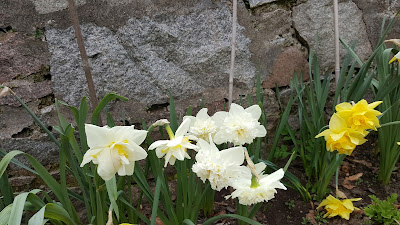 By that I don't mean count every single daffodil around the garden but the types of daffodil. Once upon a twenty or so years ago my garden probably had about 15 different daffodil/ narcissi types of bulbs. Over time many had played out their best shows and didn't reappear. I've added new ones but quite a few types were in the back garden which became my daughter's house back in 2015. 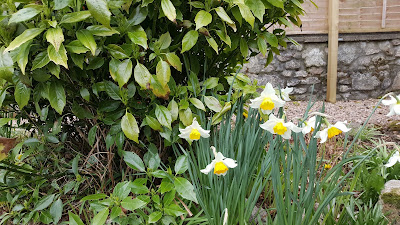 Today's count indicated a measly half dozen but they're looking great for all that.

As I clicked the shutter here and there it was evident that not all that was yellow was daffodils.

I've been trying to control the spread of yellow aconites but sometimes those cute little monsters just pop up everywhere.

And the dandelions! Oh, i know I ought to let them grow because it's great for wildlife but when it comes down to the amount of garden time available to me I'm afraid the pinching out wins over the ecological reasons for keeping the blighters. As soon as my granddaughter and grandson see dandelion heads they are jumping with joy and blowing the dandelion clocks all over the place. Hence more daffodils this year. AKA Lady Macbeth (?) I'm afraid it was a case of "Out, Out, damned spots..."

Two hours later I'm back at the keyboard but I have got an idea for a new scene in current writing so...after I post some of today's photos onto my Pinterest board I'll be back to that other real job.


Not all the current garden colour is yellow. 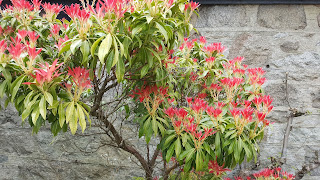 
Posted by Nancy Jardine Author at 17:27 No comments: 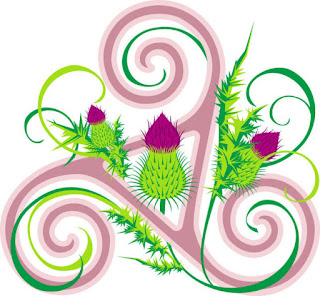 I've had a few of them today already but the one worth mentioning is my brand new blog header.

It's near impossible to get a really appropriate Ancient Celtic / Iron Ages Scotland image that I like and is a good branding for my writing.

I recently used an image of the Arch of Titus in Rome but it's time for a change. I've settled for the lovely bright image above and hope you like it as much as I do.

I acquire the use of most of my images from www.123rf.com and thank them for this one.

Now, after that slight dalliance to make my new blog header, I'm off to add a bit more to my current work in progress... since my allocated writing slot yesterday, for new writing, was eaten into by guest post writing instead.

Been quiet of late

Hello! Can it be #Friday again?

My blog posting has been sparse for a variety of reasons of late.

I've been involved in local politics, delivering some campaign information to a few hundred households, since Scotland has local elections coming up on the 4th May, My reading pace may be slowing down, or it may just be that I'm reading more daily newspapers and flagged up political articles but they are taking up an enjoyable chunk of my mornings. Reading about the damages that BREXIT from the E U will have on Scotland in general, and the potential of a future Scottish referendum, are very important to me just now. I don't often include politics to posts on this blog but it's been my desire to have an Independent Scotland for many years now and it may be that in the near future there are more mentions!

I've been entertaining some relatives during this last week and planning for a special joint 70th birthday party at the end of April (my OH and my B_I-L). Even more time will be vanishing in the coming weeks for that exciting event!

All of the above means my writing has been on hold but I did notice that my contemporary mystery - TOPAZ EYES - has a 10th 5* review on Amazon UK. It is lovely to note that the lady who posted it had picked up her copy and read it after my last author presentation in Aberdeen, Scotland in February. I look forward to finding out if she does buy more of my work and hopefully if so, she will post another review.

It's short but is certainly does the trick!
"I meet the Author who talk about her books. Topaz Eyes is a very good read and will follow on with more books from Nancy Jardine." 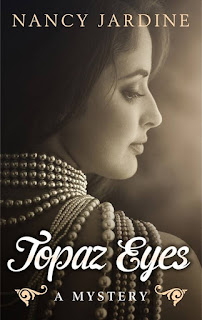 Meanwhile, I'm off to prepare my table presentation for my first FOCUS Craft Fair this year which takes place tomorrow in Inverurie, Aberdeenshire. I've a few new things to update.

Slainthe!
Posted by Nancy Jardine Author at 15:23 No comments: