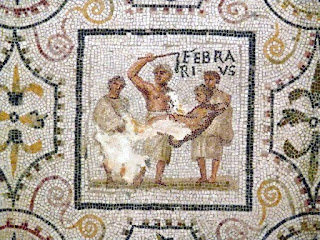 The Ancient Roman month of Februaris was dedicated to cleansing and purifying: getting rid of the winter grime and looking forward to a clean and healthy regime. I'm all in favour of that though this image from a Roman mosaic makes Roman cleansing look just a little bit painful. Ouch!

I'll personally be out in the garden doing a bit of winter grime clearing when I can make the time - and, being in NE Scotland, that only means if the weather is fair.

Yesterday, 1st Feb, was also the Ancient Celtic Festival of Imbolc, the symbolic welcome to the beginning of Spring. Happy Imbolc greetings to you!

Though I'm sure to still be immersed in the politics of the times (UK/Scotland in particular) during February, I'm also aiming to do a lot of promoting of my novels and to completing new writing projects.

The first task of the month was to create some new publicity banners for Facebook and Twitter to promote my romantic comedies/ romantic suspense novels. It is, of course, the month including Valentine's Day - which has a lot to do with my putting emphasis on those novels. The ones here have a base banner to which I'll be adding different review comments. Since Book 1 of my Celtic Fervour Saga is also a Romance novel, I'll be making a banner in a similar style for it- maybe tomorrow or later tonight after my daily Scots Gaelic lesson with Duolingo, which I'm absolutely loving, even though it's becoming a big challenge!

I will be involved in a Facebook event with a number of my RNA (Romantic Novelists' Association)
Scottish Chapter members next Sat 8th Feb / into Sun 9th Feb, when we'll all be sharing information about our romance novels. It'll be a fun event, which I'll be popping into when I'm not at my first FOCUS Craft Fair of the year which is also a Valentine themed event.

All links for buying my novels are available via the right sidebar of this blog. Enjoy the beginning of February!
Slàinte!

Posted by Nancy Jardine Author at 15:06 No comments: