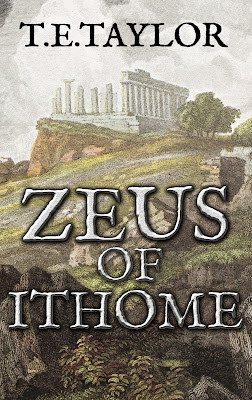 Zeus of Ithome, Tim's historical novel, will be published on the 2nd of November 2013, in just a few days.

Three Hundred Years of Slavery. Greece, 373 BC. For three centuries, the Messenian people have been brutally subjugated by their Spartan neighbours and forced to work the land as helot slaves. Diocles, a seventeen-year-old helot, has known no other life but servitude.
After an encounter with Spartan assassins, he is forced to flee, leaving behind his family and his love, Elpis. On Mount Ithome, the ancient sanctuary of the Messenians, he meets Aristomenes, an old rebel who still remembers the proud history of their people and clings to a prophecy that they will one day win back their freedom. A forlorn hope, perhaps.
But elsewhere in Greece, there are others too who believe it is time that the power of Sparta was broken.

From this peek at the blurb,  and looking at the fabulous cover, it's exactly the kind of novel I love to read, Tim. I'll be buying my copy the minute it hits Amazon this Saturday. Though, for lovers of historical adventures who just can't wait till then, it's available for pre-order from Amazon just now.  Just click the link!  Zeus of Ithome

Now, let's get going with those questions...

Hello, Tim. Welcome to my blog.  I see from your bio that you write in many different genres. Can you tell the readers in which genre you first had work published?  And when this was?
The first thing I published would have been a poem.  I had a couple in local papers when I was a child, if that counts.  (Of course!) I have published poems here and there in magazines and the like from the 1990’s onwards, though I’ve never been prolific.  My first published book, Knowing What is Good For You, was an academic non-fiction book on the philosophy of well-being – about what it is for someone’s life to go well for them, or for something to be good for someone.

That seems very positive! What made you make the transfer into fiction writing, or had you written fiction before now without seeking publication?
I have always been interested in writing fiction, as long as I can remember: before Zeus of Ithome I had written two unpublished novels.  So it was not so much a transfer as a return to something that was there all along.  From now on, I see myself continuing to write fiction in parallel with academic non-fiction and poetry.

A great antidote for anyone who might come up against writers block would be to have a few different projects on the go. As a lover of all things historical, I’m very intrigued about your forthcoming Crooked Cat novel – Zeus of Ithome. Can you tell us a little bit about it, please?
It is set in ancient Greece in the 4th century BC, where the Messenian people have been enslaved for three centuries by their neighbours, the Spartans. They have revolted on several occasions during that period, but each time the Spartans have been able to re-impose their domination on the country.  The novel follows the fortunes of two Messenians who want to stir their people into revolution one more time, and the events happening elsewhere in Greece that will have a big impact on their plans.

Does Zeus of Ithome straddle different sub-genres of fiction?
I would say it was a historical novel in the fullest sense, as a fictional story woven around real historical events, that tries to capture the essence of a particular time and place.  But it’s also, on one level, an old-fashioned adventure story, and on another an exploration of friendship, loyalty and overcoming fear.

That sounds like exactly the kind of story I love to read. Were there any triggers which led to the plotline for Zeus of Ithome- e.g. travel or some personal experience?
The thing that set me off was reading about the ancient Messenians in a book about Sparta.  I wanted to find out more about them and when I did, their story seemed to be crying out to be told.  I was able to work into the plot some places I had visited myself and had vivid memories of – that was a great bonus.

Like you, I try to add places I've been to into my novels when I can, and really love the buzz it gives me when I re-read and remember those locations. But... back to Zeus of Ithome. Who's the protagonist of the story?
The central character is Diocles, a seventeen year-old Messenian helot slave, whose family farms a plot for a Spartan master.  Forced to flee from Spartan assassins, he takes up with Aristomenes, an old rebel who plans to seek guidance from the Oracle of Delphi on how to instigate revolt in Messenia.

Great plot! Do the names for characters just pop into your head as soon as you start a book?
Sometimes, but not for this book!  I did some research to find authentic ancient Greek, even specifically ancient Messenian names.  Diocles got his name from a real Messenian who was a victor in the Olympic games in 752 BC.  And there are some  historical people in the novel too.

I'm glad to hear that, Tim. I choose the names of my characters very specifically, too. Even if the reader doesn't realise it when reading my novels, it means a lot to me to know I've spent time matching the name with the character. But...back to the interview. How much research did you have to do?
Quite a lot.  I don’t think there is any point in writing a historical novel unless you are true to the time and place you are writing about and can really bring it to life.  A good deal is known about ancient Greece in the classical period, so there were lots of details to be researched, though I did start with a reasonable general knowledge of that age.  But the research was enjoyable in its own right, not a chore.  I did most of it as I went along, rather than sitting in a library for weeks before I started.  That’s the beauty of the internet!

I totally agree about the need for authenticity in a historical novel, and I'm so pleased to meet another author who admits to researching as they write. What’s Diocles' biggest challenge?
He has a lot of growing up to do, very quickly.  He has to learn to look after himself, and to take on responsibilities he is completely unfamiliar with.  Later, he has a difficult choice to make between his loyalty to Aristomenes and the opportunity to become involved in developments elsewhere in Greece that may ultimately help their cause.

Ah! The conflict and the soul searching that entails. What are you working on right now?
I am working on another novel.  Though I’m sure I will return to ancient Greece in the future, this one is very different from Zeus of Ithome – it is about the downfall of a fictional Latin American dictator, and explores the different ways in which power corrupts. 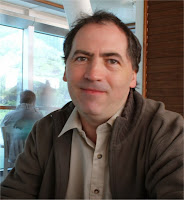 And now for some personal nitty gritty...

Favourite time of year?
It all depends on the weather!  Autumn can be beautiful when you get a bit of sun and the trees are all those shades of gold and red.  Or it can just be grey, wet and miserable.

Favourite leisure pursuit?
I own several guitars and love to spend time playing them (and sometimes a bit of piano).  I also like hill walking, or just being among hills and mountains.

Favourite reading material?
I like lots of different kinds of book, and far more authors than I can possibly mention, but particular favourites include, among novelists, William Golding, Haruki Murakami and Paul Auster.  And among poets Wilfred Owen, Dylan Thomas and Sylvia Plath.

Favourite place to visit for a short weekend break?
Somewhere with mountains, ideally, though it’s always nice to discover a new town.

Favourite restaurant cuisine?
Italian or Chinese, depending upon mood.

Great answers, Tim. Thank you for letting us get to know you.
Here's a bit more about Tim:


Tim Taylor was born in 1960 in Burslem, Stoke-on-Trent - home of Josiah Wedgwood, Robbie Williams, Phil 'The Power' Taylor (no relation) and Lemmy.  He grew up just outside the city in Brown Edge, then at the age of 11 moved to Longsdon, near Leek.
Tim went to Newcastle-under-Lyme High School, then studied Classics at Pembroke College, Oxford. After graduating he moved to London and spent a couple of years playing guitar in a rock band. When it became clear that he was never going to be a rock star, he sadly knuckled down and joined the Civil Service, where he did a wide range of jobs, including Chief Executive of the Veterans Agency.
Tim married Rosa Vella in 1994 and their daughter Helen was born in 1997. In 2001 they moved to Meltham, near Huddersfield, to be nearer family, and have lived there ever since.
While still in the Civil Service Tim wrote two unpublished novels and studied part time for a PhD in Philosophy at Birkbeck, University of London, finally achieving it in 2007.  A period of illness in 2007 caused him to re-evaluate his priorities.  He took a career break in 2009 in order to spend more time writing, and subsequently left the Civil Service altogether in 2011.
Tim now divides his time between creative writing, academic research and part-time teaching and other work for Leeds and Huddersfield Universities.
As well as fiction, Tim writes poetry, which he often performs on local radio and at open mic nights (where he also plays the guitar).  He is involved with several local writing groups. He also likes walking up hills.

Thank you so much for coming today, Tim.  Best wishes for the launch of Zeus of Ithome... and I'm looking forward to 'seeing' you at the Facebook launch on Saturday.