Good Wednesday to you!
I seem to be writing this quite a lot recently, regrding the weather in my part of the world, but the grey rainy morning outside my window means I need something to lift up my sporits. It's just perfect that my guest today is Sue Barnard. Sue's a lovely, bubbly, return visitor, a fellow Crooked Cat author who is also an editor. She's come with some writing tips for anyone in need of a little nudge in their writing.
Welcome again, Sue, and over to you...
NEW LIFE FOR OLD CHARACTERS
Sebastian Faulks, Charlie Higson and Anthony Horowitz have all done it for James Bond. Alexandra Ripley did it for Scarlett and Rhett. Jill Paton Walsh did it for Lord Peter Wimsey and Harriet Vane. There have been numerous attempts to solve Charles Dickens’ unfinished Mystery of Edwin Drood.  Even Thomas the Tank Engine has been given a new lease of life, by the son of his original creator.  And I am currently editing Cathy Bryant’s wonderful debut novel (to be published by Crooked Cat later this year) which does the same for some of the cast of Pride & Prejudice.
So what is it that makes authors want to write new stories centred on existing characters?
In one respect, I think, it’s because once the original author has died, there can be a great sense of regret that there will be no more from the same pen. So if the authors’ stories and characters are popular, why not give their fans more to enjoy, in the form of sequels, prequels, or simply more adventures?
You don’t need to be a famous, or even a published, author to take advantage of this very useful literary device. Using a well-loved character (or set of characters) as the basis for a new story can be an excellent way of dealing with an attack of writer’s block. Think of a favourite character from a book, a play, or even a poem. Imagine what it might be like to meet that character face to face. What would you say to them? How do you think they would respond? Try writing a short dialogue between the two of you, and see where it leads. You may well find that it gives you a springboard to a whole new story. No writing is ever wasted, even if it doesn’t end up in the final version.
Or think about how the character behaves in the original work. If his or her behaviour is unusual, what might have happened in the past to affect their actions in the present? Let your imagination run riot – prequels make fascinating stories!
Or you can even give the original story an alternative ending – as I did with my debut novel The Ghostly Father. It is a sort of part-prequel, part-sequel to the original Romeo & Juliet tale, and explores what might have happened to Shakespeare’s star-crossed lovers if events had taken a different course. In the play, a sequence of misfortunes leads to a maddeningly preventable double-suicide. But what if just one of those unfortunate events had not occurred? What difference could this have made?
Read the book and find out…
Thank you for the ideas, Sue. I've read The Ghostly Father and other books published by Crooked Cat and loved them. I've recommended them in the past and can heartily do so again. 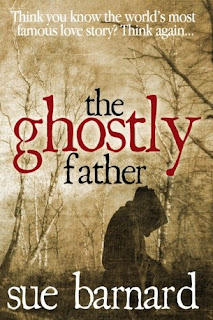 Romeo & Juliet - was this what really happened?

When Juliet Roberts is asked to make sense of an ancient Italian manuscript, she little suspects that she will find herself propelled into the midst of one of the greatest love stories of all time. But this is only the beginning. As more hidden secrets come to light, Juliet discovers that the tragic tale of her famous namesake might have had a very different outcome...

A favourite classic story with a major new twist.

If you love the story of Romeo & Juliet but hate the ending, this is the book for you.

About Sue...
Sue was born in North Wales but has spent most of her life in and around Manchester. After graduating from Durham University, where she studied French and Italian, Sue got married then had a variety of office jobs before becoming a full-time parent. If she had her way, the phrase "non-working mother" would be banned from the English language.

Since then she has had a series of part-time jobs, including some work as a freelance copywriter. In parallel with this she took several courses in Creative Writing. Her writing achievements include winning the Writing Magazine New Subscribers Poetry Competition for 2013.

Sue has a mind which is sufficiently warped as to be capable of compiling questions for BBC Radio 4's fiendishly difficult Round Britain Quiz. This once caused one of her sons to describe her as "professionally weird." The label has stuck.

In addition to working as an editor for Crooked Cat Publishing, Sue is the author of three novels: The Ghostly Father, Nice Girls Don't and The Unkindest Cut of All.

She is also very interested in Family History. Her own background is stranger than fiction; she'd write a book about it if she thought anybody would believe her.

Posted by Nancy Jardine Author at 08:59