Hello to my Tuesday readers! 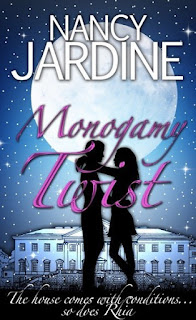 Since Monogamy Twist is one of the three featured books on the Crooked Cat Books page on Facebook this week, I've been thinking about highlighting different aspects of the story.


The art of dialogue is always a hot topic on the writing circuit, its importance not to be underestimated. Depending on the intended audience, a novel might be heavy on narrative, or it might be a good 80% dialogue.

I’m reading a historical novel just now which is almost predominately narrative. I like the fact that the author has the choice of using great vocabulary in his highly descriptive passages and though some paragraphs are very long, there’s plenty happening in them to retain my attention. Of course, I have to be realistic and say that another reader with a shorter attention span might get bored with too much narrative description.

The chick lit novel I read before that had very few long narrative passages but the description of surroundings, feelings and thoughts of the characters came to me as a reader within the excellent dialogue which zipped along at a hearty pace. Many readers prefer this type of novel and from some recent statistics it would be the preference of those who like to read novellas rather than full length novels, sometimes because time for reading is restricted, or their concentration for reading is short.

Then again, there is the soliloquy. Sometimes an author, or more often a playwright, just wants a character to have a conversation with him/herself to sort out their thoughts, or express some feelings - the most famous of these probably being Shakespeare's Hamlet's soliloquy in the tragedy, Hamlet.
Here's part of one definition of a soliloquy:

"...Soliloquy is used as a tool or process by which the dramatist conveys the secret thoughts and/or intentions of the character, to the audience or the reader of the drama, but; also while doing so, it preserves the secrecy of those thoughts from the other characters of that drama.

A soliloquy is generally made when the character is alone, or when he/she thinks to be alone, in order to preserve the secrecy from other characters."

This same site goes on to describe the purpose of the soliloquy:

In Monogamy Twist, I begin with a scene where it seems as though Luke Salieri is speaking to a ghost.


“Come on, Amelia.”
Luke Salieri’s curled fist thumped repetitively at the wood.
“Do you reckon I’m such a sucker? Even if I am talking to an effing ghost?”
A response wasn’t reasonable because he was talking to a damp wall-covering that oozed around under his warm skin. It was unable to reply to him, just like Amelia Greywood couldn’t either, because she’d been dead the best part of two weeks.
“Your conditions are a bloody insult.”
Striding off to yet another room, he let off even more steam. The bedroom was brimful of contents as though the room was still lived in, yet no-one had inhabited it for a long time, not even Amelia’s ghost. The house wasn’t the least bit spooky, but if talking to her damned spirit would conjure her up it would be worth it. Just to have his questions answered. What the Dickens was he going to do about this property?
“Why did you choose me, Amelia?”
He loathed indecision, avoided anything that made him feel vulnerable, but this was like playing some game with pieces missing, knowing his opponent had a full deck, and that only by resorting to some kind of dishonesty would he gain success. Yet honesty was Luke’s middle name. He was straight in business and candid to a fault in his personal life. Which often annoyed his girlfriends, though right that moment it was Amelia who was the one pissing him off.
He could afford to renovate the dilapidated property, but the rest of her conditions were an antiquated, potentially deceitful nightmare.
Temper barely leashed he confronted the elusive spectre, wishing he could conjure up her image. He couldn’t though, because he’d never met the blasted woman.
“So, tell me, Amelia. Where did you dredge up my name from?”
He swept open a Victorian monstrosity of a wardrobe, the epitome of vivid childish nightmares, not surprised to find it still contained flouncy dresses that were moth-eaten and mouldy.
“Hmm? Did you use a pin on a Trades Directory? I hardly think the internet was quite your style. Unless you were an astute silver surfer?”
That notion made him groan. Could Amelia have surfed the web to find the biggest dupe? Picked for his professional expertise was the only thing that made any sense, the only thing that gave the whole ridiculous scenario any credibility.
He strode to the nearest window to get the smell of camphor-balls out of his nostrils. The tall sash casements were clad with distressed claret brocade drapes, so distressed the colour had sun-faded to a pale blush wine. Pushing aside more cobwebs than material, he flicked the catch and yanked the window open, a shard of deteriorated wood slicing his index finger.
“Shit!” Curses garbled as he sucked off dripping blood and teased out the substantial splinter with his teeth. “How could you let a stately old home like this decay so much, Amelia?”
He tried to force the window down again, but it refused to budge, his frustrated grunts disturbed by some wildly frenetic barking.
“What the...” His part-question fogged the windowpane. The beast making the racket was a whirling dervish frolicking over the rough grass.
He grinned, the whimsical interruption lifting his tension.
“Thor. Get back here now!”


Could the conversation here be classified as a soliloquy? What is there that makes it a soliloquy or... what is missing for that classification?

If the ghost of Amelia is floating around somewhere in Greywood Hall, she isn’t answering Luke Salieri. Luke is working his way through a conversation with himself where I’ve attempted to give some information about the storyline but have posed some questions, questions that are answered as the story continues.

Only a reader can tell me if I’ve been successful. What do you think?

You can pick up Monogamy Twist  for ONLY 99P! HERE

Posted by Nancy Jardine Author at 17:06