It's a bit of a rainy start but that's okay since I'll be indoors selling my novels at the lovely town of Banchory on the road to Royal Deeside. 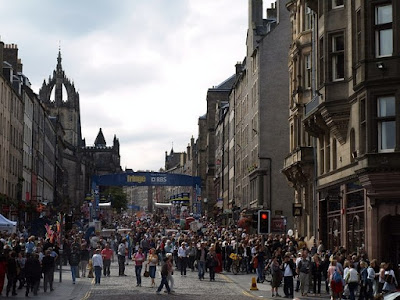 You'll also find me blogging at my every second Saturday slot at Writing Wranglers and Warriors where I'm talking about the Edinburgh International Festival.


This is a reblog of my post at Writing Wranglers and Warriors.


August is that time of year in Edinburgh, Scotland, when there’s a flurry of panic over how to get to the city and where to stay. All I can say, as a Scot, is that if you’re not there already in the city of Edinburgh by the beginning of the International Festival then you’re going to be travelling a long way to get into the city events, or you’ll be trying to find an unoccupied park bench to rest your head.

Edinburgh’s a city which hosts many festivals throughout the year. The International Festival of Arts and Drama is just one of a plethora of cultural spectaculars, though along with the Festival Fringe,  it’s quoted as being the largest gathering of performing artistes in the whole world during a fixed time period of around three weeks. http://www.edinburghfestivalcity.com/#festivals 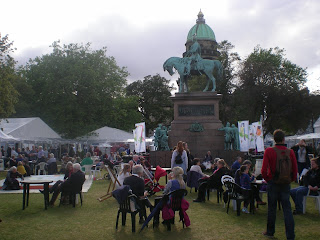 Last year, I attended the Edinburgh Book Festival because one of my novels was being showcased in the ‘Festival Bookshop’. Since I did a day trip from my home for that, roughly a 300 mile return journey, I saw nothing of the major International Festival, except to say that the city was extremely crowded with tourists.
This year the Edinburgh International Festival runs from the 7th to the 31st August, the Fringe Festival running concurrently, and there’s every kind of imaginable artistic endeavour happening somewhere around the city. 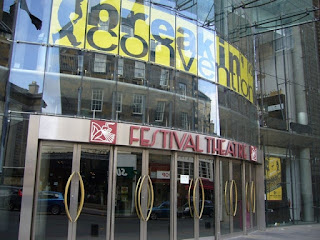 So what are these events all about and why do they happen?
The main International Festival is older than I am, having started in 1947. 1947 was a time when the world was still ploughing its way out of the effects of World War II. Life wasn’t yet ‘normal’ but many entrepreneurs were attempting to revive a spirit of enjoyment of world culture, regardless of where the performers came from. The first Edinburgh Festival of 1947 was a pioneering attempt to invite the world’s best artistes to come at the same time and entertain at different venues in Edinburgh. Please note that word ‘invite’ because it’s still the case today: the artistes performing at the main International Festival come by invitation from the Festival Director. In 1947, the festival was mainly focused on classical music but that quickly branched out the following year to include different types of performances.

Why was Edinburgh chosen as the host city for this long running festival? Rudolf Bing, a general manager of the Glyndebourne Opera house in England had been working towards setting up a festival idea since the later war years, around 1944. Performances of music and the dramatic arts had continued as much as was possible during the war years, having been seen as a boost to the spirits of the general populace and likewise army personnel, but theatre venues in some British cities had taken a toll of bombing.
Bing, and the other early organisers of the International Festival, considered a number of UK venues. Their criteria for a successful location included:
Edinburgh fit the bill!

Not only did Edinburgh fit the bill in 1947, it actually had a history of hosting Performing Arts Festivals of high calibre in its past. Though the theatres and other venues which are used in Edinburgh aren’t large compared to other locations world-wide, even back in 1947 they were considered suitable to hold an appropriately sized audience. Nowadays every possible public building is jam packed, including the streets where street performers line them like highly attractive confetti.

Those initial performances of the 1947 International programme were chosen and invited by Bing and his committee, but not all of the artistes who wished to come got those invitations. Audacity or not, some performing companies made their way to Edinburgh anyway and sought unoccupied venues to perform in.

Thus began the Edinburgh Festival Fringe- i.e. those performances on the Fringes of the Festival. The director of the International Festival during those early years, and the City council, may have been a trifle horrified by this ‘secondary’ attempt to gain audiences who provided competition in ticket buying but it seems that the performers themselves were less threatened since it is, in part, due to their ‘laissez-faire/free spirit’ attitude which has made the Edinburgh International Festival and the Edinburgh Fringe Festival famous throughout the world. https://www.edfringe.com/about-us

One of the Edinburgh Festivals I’d like to experience would be the SISF – the Scottish International Storytelling Festival in October. Performers at these events are to be admired because I think that writing a story on paper and the oral telling of a story require entirely different skills. I’ve never felt particularly comfortable at doing the latter, totally off the cuff! http://www.edinburghfestivalcity.com/festivals/scottish-international-storytelling-festival

So, writing for the Edinburgh Festivals takes many forms—every artiste needs some form of script planning; publicity and marketing is ginormous; advertising budgets very from the tiny to the extortionate. Some of those authors and script writers are very happy, I’m sure, when the venue of their artistes is filled to the gunnels!


Posted by Nancy Jardine Author at 08:12