#Familiarise Friday meets ...Alex O'Hara from THE CASE OF THE BYGONE BROTHER 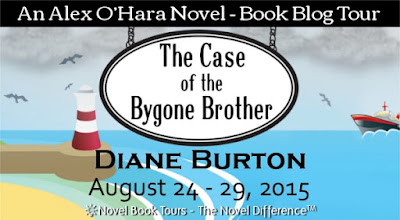 For my #Familiarise Friday slot I'm welcoming back my friend, Diane Burton, with a different sub-genre from her recent visit. Today, Diane is featuring her contemporary mystery suspense novel THE CASE OF THE BYGONE BROTHER.

To make things a little different, Diane's here today along with someone special and make sure you read to the end of the post where you can enter Diane's Rafflecopter Giveaway to WIN a $15 Gift Card.

Welcome again, Diane. It's lovely of you to bring someone else.
Diane: Thanks for having us. I’ll let my “friend” here answer the questions.

Okay, mystery guest. Please introduce yourself.
I’m Alex O’Hara. Diane writes about me in her PI mystery The Case of the Bygone Brother. You see, I’m a private investigator in Fair Haven, Michigan. I’ve always lived there, unlike Nick Palzetti who couldn’t wait to shake Lake Michigan dune dust off his deck shoes and head for the big city.

Tell us about your family.
As you can tell from my name, I’m Irish. I grew up in Fair Haven where my dad and Nick’s (we call them The Pops) had a detective agency. Our moms worked in the office and took us to work with them when we were little. When she was pregnant with me, Mom was reading Robert Massey’s book about the last tsars of Russia. Since Nick’s mom had named him Nicolas and she and my mom had hopes for the two of us, she named me Alexandra. (Good thing she wasn’t reading Gone With The Wind.) Mom died from cancer eight years ago when I was twenty-two. I still miss her.

How did your upbringing influence who you are today?
Hard work pays off. Family comes first. Great marriages consist of two strong people who complement each other. I want that kind of marriage. But first I have to establish my business. I don’t have time to think about marriage and family. Still, my folks made it work.

What was your first thought when you met Nick.
Since he’s older, I think he met me first. We played together as little kids. In high school, I had the world’s biggest crush on him. Now he’s back and I’m not sure how I feel about him.

What does he think of you?
Good question. He keeps things close to the vest. When we were growing up, he treated me like a pesky kid sister. After he left for the University of Michigan (where he majored in seduction), he acted like I barely existed. To repeat from above, now that he’s back I see glimpses of heat in his dark chocolate brown eyes.

Why did you choose your occupation?
I worked with The Pops ever since I was in high school. They showed me the ropes and had enough confidence in me to sell me the agency, retire and move to Arizona. I love being a PI. Since Nick works in Washington, DC, it’s obvious he doesn’t want the business. That’s a big relief. I like being in charge.

Research comes easy for me. I love to dig through layers of data to find answers. I want to know why people do what they do. Since I run background checks for small companies, I like proving that people are trustworthy. And if they’re not, keeping the company that pays me safe from deadbeats. What I really want is a meaty case. I might have one with the Bygone Brother.

What are your strengths? Weaknesses?
Dogged determination and independence. I think those might be weaknesses, too. According to some people (Nick, for instance) I don’t know when to quit. That’s gotten me into trouble a few times. Being independent means I don’t like to rely on anyone.

What is the biggest hurdle you had to overcome?
Prejudice. Despite all the advances in women’s rights, there are still men who think women don’t belong in the field. Old-timers (like two former employees) don’t like working for or with a “little girl.” The chief of police acts like he has to be a surrogate father and “protect” me. Thank goodness, The Pops were/are more enlightened.

Do you have any hobbies?
I love old movies. Pop and I used to watch all the old 40’s and 50’s movies—especially film noire detective movies. Pop would poke holes in the plot or explain how things are done differently today until I wanted to muzzle him. But I can recite movie quotes until the cows come home. If we had cows around Fair Haven. We have some, of course, but you’ll find more blueberry bushes and fruit trees in our part of Michigan.

What’s the meaning of the title?
A damsel in distress begs the hard-boiled PI to find her long lost brother. Only she wasn’t a damsel—more like the downhill side of 50—and according to The Pops I have to toughen up my bleeding heart. She chose me over all the other PIs in the nearby area because I’m a woman and she thought I’d be more sympathetic to her cause. Bleeding heart. Listen, I’d better get back to work. See ya.

Diane: Thanks for having us. Since I drove, I’d better go, too. I hope your readers enjoy Alex’s adventures.

More like fly home to Michigan, Diane. Thanks for letting us get to know Alex. 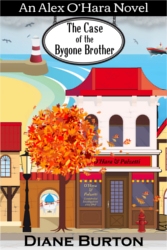 Alex O’Hara finally gets a case that will give her bottom line a much needed boost. She might even be able to change her diet from ramen noodles to prime rib. All she has to do is track down a man who’s been missing for over ten years. Piece of cake . . . until an old flame arrives and a mugger roughs her up with orders to back off.

Here's a little about Diane:
I grew up in the Detroit-area and have lived in Portage (MI), Sedalia (MO) as well as a brief stint in Chicago-land.  I've been a Parks & Recreation supervisor, an inventory clerk for a flute store, and a long-time volunteer for Girl Scouts. My last job was for an oil and gas exploration company where I discovered the cure for insomnia—reading oil and gas leases.  My longest-running gig was as a teacher where I taught elementary kids for over 10 years.  I am a member of Romance Writers of America and the Mid-Michigan and Fantasy, Futuristic & Paranormal chapters of RWA. I met my own hero on a blind date. It was love at first sight--for me. It took him a little longer. We currently reside in West Michigan and have two grown children and three delightful grandchildren.
I’ve been a reader all my life, and I love movies, especially action adventure, mysteries, science fiction, and romantic comedy. Castle, Firefly, and NCIS are my favorite TV shows. So is it any wonder that I write science fiction romance and romantic suspense, both with comedic elements?
You can find Diane at these place:
WEBSITE  BLOG  TWITTER  FACEBOOK GOODREADS  AMAZON AUTHOR PAGE

Diane- thank you popping back and best wishes with THE CASE OF THE BYEGONE BROTHER.

Posted by Nancy Jardine Author at 11:24