Happy Saturday to you!

As I publish this post...
I’m off on my Scottish high horse yet again today to sell my books. This time I’m manning a stall at the famed Aboyne Highland Games, a large event by many local standards. The title of this blog includes the phrase CAVE ADSUM - the motto of the Jardine Clan meaning 'Beware I come...or Beware I am here! 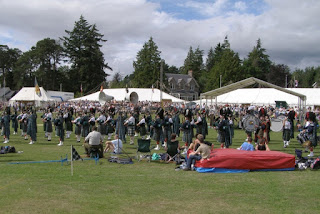 When you read to the end of this post, you’ll maybe realise that the Aboyne Games are also very important on the highland dance circuit for specific reasons!


The Aboyne Highland Games are a very different sort of gathering from last week where I attended the Banchory Show which is primarily for showcasing farming stock. The tradition of the highland games features people rather than animals and this year there are hundreds of events on the Aboyne Games programme. The visitor can watch live competitions of strength in the heavy events; competitions for individual pipers and pipe bands; competitions for highland dancing; track event competitions and competitions for fiddlers. It will be a noisy and exciting area to be in- of that, I’m sure because I’ve attended as a tourist myself.
http://www.aboynegames.com/information/events/

These Highland Games in Scotland are replicated world wide and for many people visiting those far flung games, it may be the only image they have of Scotland.

So, what has led to the establishing of these highland games? The history is fascinating for someone like me who is super proud of my Scottish heritage, yet being history it gets pretty detailed.

Back in early Celtic times in Scotland, it’s believed that the chiefs of Celtic roundhouse villages chose their strongest and most competent warriors to act in the role of bodyguards when the chief went forth to the territory of other chieftains. It’s also believed that these chiefs organised gatherings, pitting one tribal champion against another in order to prove who the fittest warriors really were. These were honourable gatherings, yet fiercely competitive and geared for warlike purposes.

During the reign of Malcolm III (1058-1093), one of the early ‘Scottish’ monarchs, it’s believed that the first ‘sporting’ aspects of the gatherings began- rather than only showing off the war prowess of a clan.

Zip on to the year 1603. In 1603, Scotland had a 'Stuart' king in James VI, the son of the deceased Mary Queen of Scots. England had just seen the end of the extremely long reign of Elizabeth I, a queen who died with no offspring to take over the throne on her deathbed. That year of 1603 marked the Union of the Crowns of Scotland and England (+Wales) when James VI of Scotland ( 1566-1625) also became James I of England.

This union was only of the monarchies, since the Scottish Parliament was retained, as was the Parliament of England and Wales. Scotland also retained its own judicial and education system.

These two portraits painted a decade apart depict James VI. I'm not sure which I prefer - how about you?  (via Wikimedia Commons)

However, the next century saw a huge amount of unrest on mainland Britain as the religion of the next monarchs meant battle after battle for supremacy—protestant against catholic. The Clan system in Scotland was very divided in its loyalties and gatherings of more than a handful of people were regarded as being potentially dangerous. They could have been for purposes of insurrection so ‘friendly’ clan competitions weren’t exactly the order of the day, yet clans did come together at the request of their laird.

In 1702, Queen Anne ascended the throne but the succession of the next ‘United Kingdom/UK’ monarch was in doubt as Queen Anne had no Stuart heirs (her last remaining child had died in 1701) — meaning the crown would have to be given to a European relative on her death. This situation caused much discussion and dissent around mainland Britain, the Jacobite faction favouring a Roman Catholic monarch and the opposition rooting for a protestant one.

Against the will of many of the Scottish people, the parliaments of Scotland and England were joined in 1707. Even though Scotland retained its own judicial system, matters of ‘national security’ were issued from London. This meant Government troops were enforcing a semblance of peace between the clans and between rebellious Scots who were challenging the crown in england.

The Cromwellian Interregnum of 1649-1660 was an era of neither king nor queen, a republic existing for a short time, and out of the eye of the Commonwealth forces the clans were still gathering but not for sport. The next half century saw restored Stuart king and queens but the protestant /catholic divide still festered. Clan gatherings occurred during this time, too, when the laird called his men together, though again sport was not the aim.

So, what has all that to do with the tradition of the Highland Games?

In 1703, the Laird of Grant (Clan Grant) requested 600 of his clansmen to gather together for a competitive athletic and more leisurely purpose. This raised a number of eyebrows and was sufficiently suspicious for it to be recorded by the governor at Fort William (The ‘UK’ government forces base). The gathering went ahead but the participants were requested (read ordered) to be very distinctive and thus easily identified. Records request that those going ‘hoisting and hunting’  should wear: “Highland coates, trewes and short hose of tartane of red and greine sett broad springed, also with gun, sword, pistol and dirk.”

Thus began the tradition of highland games identification.
Sir Walter Scott began his first accounts of the kilted highlanders who engaged in competitive athletic competitions; tossing cabers and throwing the shot put (a rounded stone). After the military struts and demonstrations of military prowess, these highland men also skirled the bagpipes. Read his Waverley Novels to find out how his description embellished and brought the scenes to life.

These organised ‘kilted’ gatherings continued, at times, till approximately 1746 but the Jacobite rebellions had again made them problematic. After the Battle of Culloden in 1746, the government of the United Kingdom issued the Act of Proscription. This banned the wearing of plaids/ tartan. The playing of bagpipes; having gatherings and the carrying of arms were forbidden under penalty of death. Much of the clan system traditions of pitting strong warrior against his neighbour, under any kind of circumstances sporting or lethal, were destroyed. This proscriptive situation lasted for many years till 1782.

It wasn’t until Victorian times that the games were re-established again in all of their full highland glory since Queen Victoria and her husband Albert were impressed by all things tartan - in part, thanks to Sir Walter Scott's influence.

The Aboyne Games recommenced in 1867, and with the exception of the 2 world wars have continued annually ever since.
I'm very excited about being a tiny part of such a prestigious gathering. I don't expect to manage to get any photos as I'll be behind my stall inside a dedicated marquee for FOCUS crafts.

I might not get to see any of the ‘Aboyne Dress’ worn by some of the dancers and that’s a great pity because I’ve only just learned that it was at the Aboyne Games in the 1970s that a new style of women’s highland dress was decided upon. The traditional, and more masculine, kilt type of outfit is only worn by women/girls at the Aboyne Games for a couple of the very traditional dances with the less formal ‘Aboyne Dress’ worn for the Scottish country dances and the bulk of the highland competitions.

I learn a lot every day- what about you?

Posted by Nancy Jardine Author at 00:03