Sunday snip from #Take Me Now 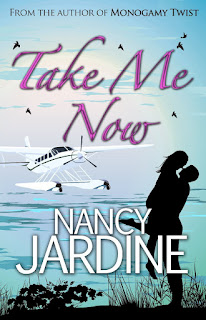 That means I'm off to Ballater (Royal Deeside) again but this time it's to The victoria Hall where there's a FOCUS Craft Fair. The day looks to be a good one with plenty of warm sunshine to cheer everyone up. My books are packed and ready for the approximately one hour drive. As always when I sell my books at these Craft Fairs, I'll be hoping for lighter boxes to bring home.

Since I've been out and about blogging a lot recently, with more blogs to visit in the coming days I thought it would be timely to post an excerpt here from Take Me Now.

This excerpt is from well into the story. All isn't hunky dory between Aela Cameron and her temporary boss, Nairn Malcolm. their interaction in the office has been very frosty during the day until...

“I’ve a client meeting in half an hour. Bring the Range Rover to the door for me, please.”
“You don’t have anything on your diary, sir.” Her tone was snippy as she’d heard nothing about this plan.
“Change of tense, Miss Cameron. I didn’t, but since I just made the appointment I now do have a meeting. Do you have a problem with that?”
Stony silence accompanied them on the short journey - apart from the posh voice of the navigation system - till she pulled up in the car park of the office building he had requested.
“Do I need to be prepped for this meeting, sir?” Determination to be professional reeked from her, maybe a little too much because she hated the impenetrable wall between them.
“You’ll cope. I’m here to negotiate a better deal for the newest advertising campaign for Adrenalinn Adventuring. Robin Ellesmere was primed to attend, but he’s gone off for emergency dental treatment - having broken a tooth, or something. That’s why this meeting wasn’t on my diary.”
Aela refused to apologize for her manner. Their cool relations were his fault, just as much as hers, but she was careful not to allow her feelings to be noticed by the advertising executives. As she was coming to expect, the meeting was successful from Nairn’s perspective though it took a couple of hours. By the time they were through, some of their antipathy had melted: not totally relaxed, but not at odds either.
Nairn was describing an earlier ad campaign as she drove along the slow lane of a busy motorway on their return to the office. “What the shit…?” Nairn broke off when his butt began juddering on the seat.
“Brace yourself!” she yelled as her finger flicked on the left indicator, the nearside of the car shuddering even more, right underneath a yelping Nairn.
She yanked her foot off the accelerator. Defensive driving techniques she’d learned years before got their first proper airing. She was wrapped in traffic. Car in front; one behind; another in the next lane alongside. A glimpse at the rear-view mirror told her the car behind was too close for sudden deceleration. Harsh braking was no option anyway.
“Hazards!” she yelled at Nairn.
Nairn angled forward and punched on the hazard button set in the middle of the console since Aela needed both hands to control the jouncing and slewing of the car. Before sliding back in his seat again, he flipped down the visor at his side of the car, the mirror giving him a rear view.
“He’s too bloody close, Aela,” he warned.
“No. Look. He’s slowing down.”
Adrenalin pumped fiercely as she guided the convulsing car over onto the hard shoulder, thanking the almighty the driver behind had got the message as soon as the hazards flashed - but he was still a hairsbreadth from her bumper.
Struggling to keep on a straight course her grip was indomitable till the car eventually grated to a halt. Yanking on the hand brake, she braced her forearms on the steering wheel. Her whole body was still vibrating - though thankfully the car wasn’t any more. Her head twisted around to look at Nairn before she collapsed back in her seat.
“You okay?” she muttered, a nervous smile erupting. “Bejeezuz! Thought we were done for, there.”
His eyes flickered, his mouth twitching before he groaned. “You sure are a cool customer under pressure. What the hell just happened?”
Aela didn’t care to analyze. The adrenaline was still pumping high and all she wanted was to devour Nairn. Unclipping her seat restraint she grabbed his face and took his lips in a kiss robbing both of them of their senses. Still on a roll she snatched another. Nairn needed no prompting to control the next as his good arm crushed her to him.
Sanity slowly returned. They were not in the safest of places to be conducting any kind of lovemaking…or affirmation of life. For in a way that’s what it was. Slipping free of his grip, her chest heaving, she grinned. “We are still alive, aren’t we?”
His answering smile was not constrained. Admiration, gratitude…and something else, really intense, radiated back to her. When he eventually spoke his voice was the deepest whisper. “Yeah. My…oh…so competent PA. More alive than you know.” His knuckles stroked her cheek, the merest soft touch.
For an aeon she stared: Nairn stared back. Neither of them moved. But the car did from the buffeting blast of other vehicles whizzing past them.
“Don’t you dare move yet, Nairn Malcolm. Not till I make sure it’s safe,” she ordered as her pulse settled, just a little.

And to find out more...just click on the cover image on the right sidebar of this blog. It'll magically zoom you to Amazon where you can buy an ecopy for only £1.99.