Book Talk - or spending an entertaining time of day... 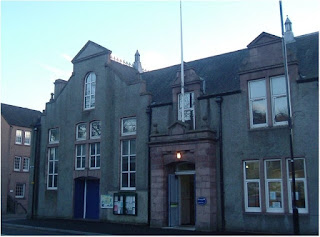 I'm back from Banchory Town Hall. The rain chucked down all day and people were thin on the streets which meant very few people popping into the FOCUS Craft Fair where I was selling my paperback novels. Entry is FREE at FOCUS events, so during the heaviest downpours, there was a smattering of the less than hardy folks taking shelter - and quite blatant about it.

I had a lot of lovely conversations with people even when I knew they had no intentions of buying any of my books, but that didn't prevent us from spending some nice 'time of day'. I always thought  the expression 'spending the time of day' was an odd thing to say but now I know exactly what it can mean and it didn't mean me talking about the predicted boring weather.

In one instance, I shared a lovely chat with a man who loved reading non-fiction history books but didn't like reading fiction. I learned a thing or two about the local history around Banchory from him but since it was 'spending the time of day talk' I would be authenticating what he said before I'd use any of the facts in my writing. That doesn't mean I doubt the man's honesty - it's just that I'd want some sort of evidence to back up his ancestral stories about MacDonald's taking up residence out by the Howe of Cromar near Tarland, not so far from Banchory, after the massacre at Glencoe. He was delighted to tell me he had acquired his surname of Cromar because his ancestors had renamed themselves and took on a variant of the local name. As it happens, I had been reading and blogging about the 'Castles of Mar' just a few weeks ago  (see my article here for the origin of the MAR estates - https://writingwranglersandwarriors.wordpress.com/page/3/) . From that research, I know just how many Aberdeenshire names have 'MAR' as part of them - names spread over a huge area of Aberdeenshire, which is a very large chunk of north-east Scotland and in ancient times one of the seven pictish areas of 'Scotland' north of the central belt.

I made no sale with the man but it was a lovely distraction to the lulls when there were no punters.

Another fine conversation with a couple about different fiction genres, and the reading of novels on an ereader, didn't lead to any paperback sale but hopefully it may have resulted in another Crooked Cat author getting an ebook sale since he liked to read 'hardboiled detective' novels. Having emphasised that there were many Crooked Cat ebooks reduced to 99p till the 15th (today), the man tapped away at his phone and took photos of my banner, even though he'd taken one of my business cards. Crooked Cat Publishing has very fine authors in its cradle.
A little later I saw him up in the balcony taking photos of the craft fair. I was left wondering what he was doing. And if either he or his partner would buy any ebooks. Whatever that result they left knowing that

The highlight of the converstions, though, had to be when a young lad homed in on my contemporary novel Topzaz Eyes. The novel is for a general adult audience - no overt sex, violence or bloody horror in it, but still not for someone around the 12  years of age, I guessed him to be. He lifted up a copy of Topzaz Eyes while beckoning over an older woman, I sussed out was his mother. Steeling myself to not dissapoint him, since his enthusiasm was brimming over, I was utterly surprised to hear him tell me that his name was Finlay Jardine. 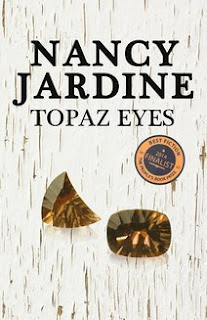 He then went on to burbble that it was great meeting an author who had the same name as he had. A lovely conversation ensued with his mother, on holiday in Banchory but who normally lived in Glasgow- the city of my upbringing. An accompanying couple with them were his uncle and aunt- also named Jardine. After exploring some brief genealogy we decided it wasn't too likely that we had 'near' Jardine relatives but couldn't discount that my husband and the man might share some forebears before the early 1700s - the furthest back I can authenticate my husband Alan's ancestors. Time, and a lot of ancestry research, will tell if hubby and that man Jardine are related.

Ta DA! Even though I'm not related (via my married name) to that family, nor to the author Quintin Jardine, nor to the Liberal Democrat candidate Christine Jardine (a civic councillor in Aberdeenshire) ..the man bought Book 1 of my Celtic Fervour Series The Beltane Choice with the proviso that he'd buy the rest of the series if he liked Book 1.

You know - I'm pretty sure he MUST be related to my husband's family!

A good day out even though I only sold 4 books!