I've no guest authors booked just now for my #Welcome Wednesday slot but I'm taking the opportunity to introduce you to Severus & Serapis.

To me, that sounds like the phrase ought to have come from a Victorian hymn though Serapis isn't to be confused with Seraphim.

There is a religious element to the paired names in the title of this blog, but Serapis is different from the winged angels of Christianity.

Severus, as in Ancient Roman Emperor Severus, has been mentioned a time or two on this blog in relation to him being a character in my time travel novel - The Taexali Game - along with his nasty son Caracalla.

Serapis was a Greco/Egyptian deity adopted by some Romans and Serapis got his fair share of worshipping from both Severus and Caracalla.

It’s now approaching the end of November and the season in is hovering between autumn and winter. Deciduous trees have almost fully shed their leaves and the temperature at night sometimes dips below freezing.

It makes me wonder if the seasonal weather and temperatures back in AD 210 northern Britannia (Aberdeenshire) were much different. If there was little noticeable change I can see why the ancient Roman legions of the Emperor Severus and his son Caracalla hot footed it down to Eboracum (York) to winter there. The climate might only have been a shade better but the emperor, and the troops, had real stone or wooden buildings to stay in rather than the tented accommodation they endured on the campaign trail, albeit that I’m sure the emperor's and the senior officer tents were fitted out with the best luxuries possible.

It was written that Severus certainly went back down to Eboracum after some negotiations with the Caledons and Maeatae of the north east of what is now , probably before the winter set in. The emperor by then was ill and had been for some time. It's also documented that he was extremely superstitious and had had portents at an earlier time that he would journey to Britannia and that it would be the place where he would die. I'm sure that Serapis took up Severus' worshipping time every day as he lived through his final days. On February (4th) AD 211 Emperor Septimius Severus died at Eboracum.

Whether or not Caracalla went south to York at the same time as his father isn’t clearly documented though a historical reference indicates he stayed a bit longer. If Caracalla remained for a time to teach the northern tribes an even more thorough lesson, then I’m thinking he would have been doing a fair bit of praying to his favourite deity as Alban Artuan (the winter solstice) arrived- praying for some warmth, comfort and a good meal.

Since it's recorded that Caracalla was at his father's deathbed, then he clearly didn't spend the full winter season in Taexali lands ( north east Scotland). I love this painting by Jean-Baptiste Greuze showing Severus reprimanding Caracalla. (The rumour being that Caracalla tried to persuade Severus' doctors to poison the old man) Severus' deathbed must have been a pretty hot place to be in,  if the naked figure is anything to go by - the irony of the dodgy situation well portrayed!

Of course, Caracalla's presence in Eboracum by the beginning of February doesn't mean that he didn't leave some of his troops to experience the inhospitable Taexali and Caledon weather. The archaeological record indicates that large numbers of Severan legions occupied the marching camps at Kintore, Durno and Ythan Wells (possibly as many as 30,000) with a smaller number of troops going on to occupy the camps curving westwards towards the present city of Inverness- according to the estimates that can be made from the hectares occupied by the perimeter ditch and ramparts of the camps. Recent coin finds could indicate the presence of Severan troops in the Moray Firth area though the coins could also have got there as part of a settlement reached elsewhere- as in further south - or as collateral reaching the area through some kind of trade at a later time than Severan date of the coins.

Like Severus, Caracalla is said to have been a follower of the god Serapis, a god which had origins that are Greco/ Egyptian. During the Ptolemaic dynasty the cult of Serapis rose to huge popularity being more acceptable to both Egyptians and Greeks since it combined attributes of Egyptian and Greek deities. Though became the centre of the cult, the worship of Serapis spread throughout the Mediterranean countries. Some scholars believe the anthropomorphic deity can be traced back to earlier origins that are neither Greek nor Ptolemaic Egyptian but from . 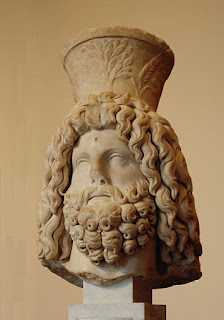 I don’t know if Severus was interested in the actual origins of the deity, or not, but by the late second century he was an avid worshipper. The iconography of Serapis ( Osiris & Apis the bull) is Hellenistic in appearance and it seems clear that Severus was quite happy to ‘ape’ the god. Severus' curls may have been natural but statues of him seem to me to indicate a certain grooming of his hair and beard to make him appear as a clear manifestation of the deity.

Posted by Nancy Jardine Author at 16:30