If you go up to the woods today…

Err...you might ask - What's that got to do with Book Week Scotland? What follows is some of my every second Saturday post at my Writing Wranglers and Warriors blog but this REBLOG also has added extras about the history of the Hill of Tuach.

"The ‘up’ isn’t a mistake when I’m referring to the woods at the top of Tuach Hill (pronounced: too-ah) the hill that I can see from my kitchen window in the . It’s a low hill of approximately 75 metres above sea level, typical of the Garioch area of Aberdeenshire where the landscape is of rolling fertile countryside dotted with low hills and knolls—some natural and some man made. Neolithic long barrows (burial mounds) and ancient standing stone circles are also dotted around the area, many of which have been excavated and documented. To the far right of the photo above are the remnants of an ancient standing stone circle, though you can't see them since they're just tucked in behind the lower tree line. 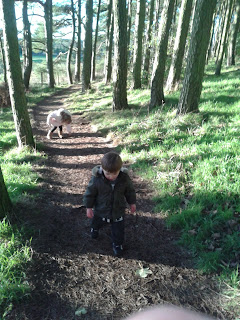 It’s important to me that these ancient monuments are still accessible by the public – and by my hunter-gatherer grandkids – but the downside of that freedom is that over the last centuries many of the monuments have been considerably eroded. That erosion isn’t necessarily from intended damage to the stones but constant foot traffic and soil wearing away has taken its toll. Tuach Hill is a well-liked place for dog walkers and it has been a popular spot for teenagers to hang- out in for many decades—probably even centuries. Lots of those users have been, and are still, blithely unaware of the antiquity within the area.

It’s a great place to go exploring when you’re only 4 and 1 and ½ years old—and it’s totally amazing just what grandma sets you to find along the way! Our collection of pine cones, twigs and forest floor debris increases each time we go for a wander, though we’ve yet to find anything seriously ancient.
In 1864, a local historian named Watt identified the Neolithic stone circle on Tuach Hill as having 6 remaining stones of a circle that was originally 24 feet in diameter. He states that there was, until recently (i.e. sometime shortly before 1864), a flat stone supported by smaller stones at the centre and the whole circle was surrounded by a wide trench and bank of 12 feet wide. Excavations made at the site (probably by him) revealed four cremation burials at the bases of the upright stones, three of which had inverted urns covering the remains.  Further cremation burials were suspected at the bases of other stones and more at the central stone. The stone circle on Tuach Hill had clearly been an important ceremonial site for a very long time

Sadly, 20 years later it was recorded that only 2 stones remained upright, though exactly why such deterioration had happened in a very short time is unclear. 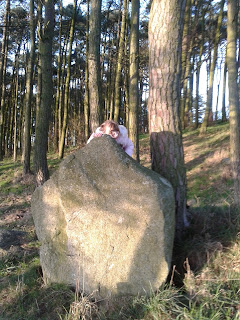 Today only one stone is upright with a few other bits and pieces scattered around it.

A recent small excavation of the site was done in 2011 and the results can be accessed here, the gist of it being that the remains on Tuach Hill are unusual in that they are thought to be of a mixture of those typical of a small henge monument yet they are also common to the settings found in the last types of stone circles to be laid down in the late Bronze Age.
You'll get details of that find here:
https://canmore.org.uk/site/18583/hill-of-tuack

I love visiting the remains of the stone circle at Tuach Hill because they are almost on my doorstep and because I've written about Tuach Hill in one of my novels (The Taexali Game), though I have to acknowledge that there are many other circles in Aberdeenshire which are much more impressive, details of which can remain for another blog post.

The Scottish Gaelic form of Kintore is Ceann-an-Torr . The Ceann part means the head or the end of …and ‘Torr’ means a round hill. This is thought to refer to Tuach Hill which is to the south of the town.

According to tradition, though any paper document as proof is long lost, Kintore was first inhabited in the 9th Century AD. It’s said that the locals helped King Kenneth MacAlpine to fight the invading Danes (Vikings) by covering themselves with oak branches and driving their cattle towards the enemy- allowing Kenneth to rout the Danish intruders. How true that is cannot be proven, and my mind boggles at the images I can create for such a scene, but I can easily envisage it all happening at Tuach Hill. The present heraldic Coat of Arms having been formally granted in 1959 incorporates the oak and the cows of the fabled battle.
http://www.ngw.nl/heraldrywiki/index.php?title=Kintore

I’d love to find more time to investigate the Kenneth MacAlpin era because he is credited with having been the first proper ‘king’ of the whole of . Before the time of the above legend involving killing the Danes, Kenneth MacAlpin was King of Dalriada, a huge tract of land in the West of Scotland. Kintore, in pre- MacAlpin times was part of what is loosely named Pictland, the last king of the area thought to have been Drest mac Fethal (IX) who was most likely killed by Kenneth Mac Alpin around AD 848. Why the locals then assisted their new ruler very soon after, approximately AD 850, is intriguing though a good degree of coercion comes to my mind.

Tuach Hill has also been called the Gallows Hill though, to date, I can find no research data which explains why this should be so...though you can find out one theory I've ruled out by reading  The Taexali Game.

In The Taexali Game, my time travel novel for Middle Grade/YA readers, set in Kintore in AD 210, my local Taexali chief is called Tuadh. In the earlier drafts of the novel he was named Tuach, and then Tuoch, but in my final version I settled on the spelling of Tuadh. The reason for this has to do with the local mystery that my time travellers have to solve, in addition to completing their interactive game task list whilst remaining alive- the threats to them coming from both the invading Ancient roman legions and some local Celtic tribesmen. To know the answer as to why I changed his name- again, you’ll need to read the novel.

A reviewer says:  “(I)… soon became drawn into this fast-paced quest with a strong sense of history, and can only admire the skill of grandmother Nancy Jardine in using a meld of fiction, research and fantasy to educate the young of today in the world of ancient Roman Britain.”

Next week, 23rd to 29th November, is Book Week Scotland. This annual event is a week long celebration of reading during which activities are held throughout intended to encourage and promote the pleasures gained from reading. In 2013, a local author friend and I held an afternoon Drop-In Quiz at a local cafe, and my 2014 contribution was an author talk at a local Public Library. 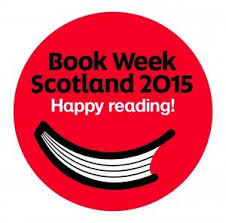 During Book Week Scotland 2015 The Taexali Game will be reduced to 99p (dollar equivalent). There will also be a ‘giveaway’ of signed paperback copies of The Taexali Game via my Rubidium Time Travel Series author page on Facebook.  Look out for the details here on late Saturday 21st Nov :
https://www.facebook.com/Rubidium-Time-Travel-Series-916558555032004/

It’s my way of celebrating this year but I did wonder what else I might have done. What would you have done?

Posted by Nancy Jardine Author at 07:09