Hello!
Sunday is well gone already in a flurry of cool driving rain and gusty wind. Not a day to be out in unless you really need to be outside, or are a great masochist.

Personally, I'm enjoying having lit a fire at the dining room hearth and liking even more that I'm actually at home during the day, for the first time in days. Laziness rules!

Last week was wonderful though, because on one of my out-and-about days I met up with some fantastic author friends who had only been virtual ones till Wednesday- Seumas Gallacher and Amy Hoff . T.F. Muir has become a brand new author friend on Facebook, as has the lovely reader Georgie McKiernan.

It was well worth my 330 mile round trip to meet them, especially Georgie who is a voracious reader: something all authors appreciate very much. I hope to have many more encounters of the virtual and physical kind with them in the future.


My two days selling my novels at Thainstone Christmas Craft Fair on Friday and Saturday were worth the sore feet since I met lots of potential readers and sold a whopping 33 paperback novels. I'm hopeful of some promised ebook sales as well, but they are always difficult to check up on.

I'm thinking I might have to use some of my meager profits, though, because seconds after my local author friend, Glen Reid, took this photo my banner decided to snap itself shut in a very dramatic and loud retort. It shocked the hell out of me right next to it and had many heads turning, though only fellow crafters since the doors to shoppers hadn't yet opened. 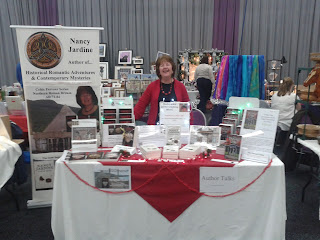 I know that my radio advert of last week made some local impact because when the Fair opened on Friday I almost immediately had a visit from a reader who said she just had to have a signed copy of The Taexali Game, the book she'd heard about on the radio.

Sadly, I didn't have many repeats of that encounter but there were certainly people walking past who were muttering to their companions and I took that to be that they'd also heard of the book but weren't interested in buying it.

So now I'm basking in the warm and cosy glow from my dining room fireplace as I add to my current writing in progress - Book 4 of my Celtic Fervour series.

The crackling and burning log and coal mixture adds just the right touch to writing about a bleak, sleety November day, back in AD 84, that my character Enya is experiencing while she is out on patrol. She scouting for any Roman scum who are getting too close to where she and her fellow displaced Brigante tribespeople are being sheltered by Lulach of Ceann Druimin, a Caledon chief. The small skirmish with the Roman auxiliaries in the scene is enhanced by the occasional popping of logs from my wood pile which are still slightly damp!

I haven't signed up for NaNoWriMo (National Novel Writing Month) since a target of 50, 000 words is probably too unrealistic when I grandchild mind two full days a week; physically sell my novels on at least one day a week; prepare and give talks on another day; market my novels; and do existing type stuff during what's left of the week. Such grumbles are echoed by many an author!

However, I am setting myself a challenge to do as MUCH new writing as I can. During the first week of November (1st- 7th) I only added about 5,000 words but I consider that okay given my schedules. Next week, I'm aiming to treble that so look out for some updates as the month progresses.