My #Monday Moments are about Roman Britain non-fiction.

My last week passed by in a blur of activities, some of which found me immersed in further Roman research, some in reading fiction for pleasure and much of the week was spent organising myself  for giving further presentations on Roman Scotland. Preparations for selling my novels at Christmas Craft Events also took up a bit of time. All events were very worthwhile!

My new research reading materials, which arrived from mid October 2015 onwards, have mostly been read now, or well dipped into. 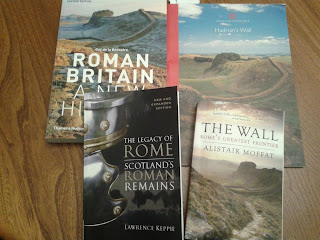 This set of books were ordered with the intention of me improving my knowledge of what was happening in Britain during the years AD 84 through to around AD 96 - though I also feel a need to improve my knowledge of the post Emperor Domitian era of AD 84 all the way to the end of the reign of Emperor Caracalla in AD 217.

I know a little of the Trajanic & Hadrianic periods, and similarly for the era of Antoninus Pius—especially with reference to Roman activity in Scotland, but learning a lot more definitely won’t go amiss!

The English Heritage copy of  (top right in the above photo) was definitely worth the incredibly low sum I paid for it via Amazon. How it can be possible to buy a book like the one I'm mentioning for ONLY 1p (£0.01) is quite incredible, but that was what it cost! It may be because there's a new print run that's either available now, or for the coming seasons in 2016. If so, I don't imagine too much will be changed and I'll get any new developments via other sources.

As a general guide to the ‘wall’ I wasn’t expecting in depth historical references but I was pleased to find it has fantastic graphics which are very useful since I have sometimes have a tendency to absorb image information better these days than straight text. If you’re looking for a good general overview of Hadrian's Wall, and some information about the milecastles and forts in the wall’s proximity, then I don’t hesitate to recommend it.

Since it’s my intention to include some scenes, in areas where  was eventually built, in my current manuscript of (WIP) of Book 4 of my Celtic Fervour Series this book is useful for imagining the terrain. The chances of the higher landscape of the Cheviot Hills being markedly different some 2000 years ago are unlikely, except perhaps where there is now heavy forestation that has been planted during the last half millennium. Vast areas of the high hills of the Southern Uplands are probably not much changed.

I'll make comments on the other non- fiction books seen above quite soon....

Posted by Nancy Jardine Author at 17:50