The Magician's Bride by Jen Black 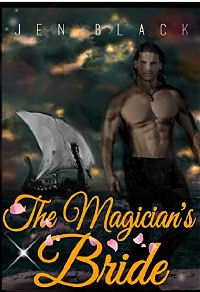 My Friday slot is about The Magician's Bride by Jen Black.

One thing about nursing a nasty cold, is that I don't feel so guilty about taking time out to squeeze in some really pleasurable leisure reading into my restricted reading slots - that is, after my grand childminding duties are over!

I'm still making headway with my non-fiction Roman Britain history texts, but needing a break and something less demanding, I started The Magician's Bride.
I've read Jen Black's work before (Dark Whisky road) and looked forward to reading this one.

Here are my thoughts on it...

If you need some enjoyable escapism, and like a bit of magic mixed in with fast paced adventure, you’ll love the The Magician’s Bride. Gisla, a young woman of great courage, goes to incredible lengths to avoid a marriage to the dastardly magician, Karli Olafsson. Even though she’s a strong willed character, able to make many decisions for herself, it’s good that Gisla meets Olli Ketilsson almost immediately since he is her champion throughout the story- albeit he’s a young man with flaws and slightly immature edges. Thankfully, Gisla’s able to also get support from Flane, Olli’s foster father, who in turn can rely on his sailing crew to aid the young couple when they are beset by the Vikings who are in the pay of the magician.

The locations for this Viking novel are very interesting, though not overly described.Viking travel between the west coast of (Alba), or northern (), and Dyflin () on the east coast of is easy to imagine at a time when the Vikings dominated over huge swathes of the land on both islands. I’ve not yet studied Viking  - on the 'must do sometime' list- but it seems to me that the author gives a credible picture of what life was probably like at a time when the traditions of the Vikings were being lived alongside an established Christian way of life.

In addition to the main characters in Olli and Gisla, there’s a variety of characters in the novel – bad and good- who enhance the backdrop and plot and add plenty of colour to the tale.

Once I got used to the unusual treatment of point of view in the novel, it was an extremely quick, pleasant, and well-edited read.