A wolf features in Before Beltane as just one of the trials for Lorcan of Garrigill to confront and conquer, during his journeying in the service of King Venutius. 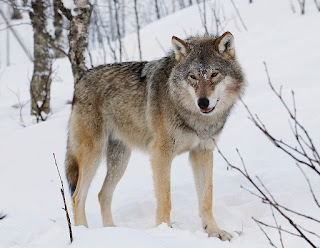 In AD 71, when Before Beltane takes place, wolves were fairly common in the forests of north Britannia. There were plenty of forest areas for a human to pass through to get from place to place, so this meant contact with wolves was also not too unknown.

Being predatory animals, Lorcan knows that wolves choose their moments to attack, and look for easy prey. However, the wolf tends to be a social animal and generally moves around in packs, or small family groupings. The large pack forms in such a way that the old and more infirm are the leaders and set the pace, with the rest of the wolves following. The rear of the pack is also generally comprised of the strongest and able wolves who can protect all who go in front.

If a lone wolf is spotted, as in Lorcan’s case, then it may be more dangerous. A wolf split from its pack may be very vulnerable, shunned from its peers for some reason, and therefore more dangerous to a human. Desperation to eat to survive may be its driving force.

Lorcan knows that wolves attack humans less often than small animals. The wolf tends to stay in deep forest areas and avoids people in general, but when in a compromised and hungry condition they might attack whatever comes near them. If that is a human, then they will bide their time till they think success will be their outcome.

Lorcan’s adventure with the wolf is one that’s almost spiritual. The gods have been testing him in lots of situations and the wolf attack is just one more hurdle for him to jump over.

You can read about his adventure with the wolf  in Before Beltane.

Pre-order the eBook HERE or buy a paperback HERE.

Posted by Nancy Jardine Author at 20:58