My Before Beltane writing post today for April 8th is about deer. I decided to include scenes in Nara's story which were examples of her duties as an 'almost priestess ' of the sacred nemeton. The most obvious jobs were those where she demonstrates skill as a healer, and as a trained warrior. I wanted also to convey that as a much older acolyte/ almost fully-initiated priestess, Nara was also responsible for the instruction of the new and younger recruits to the priestess village.

I thought of what life skills she might be teaching. Reading was definitely out since there is no evidence that the druid faith, priests or priestesses, wrote anything down. Basic sewing skills would have probably have been learned before a novice even entered the sacred nemeton home of the priestesses, and basic loom weaving skills were probably similarly learned at a very young age.

Ensuring that sufficient food for the priestesses was in plentiful supply would have meant some hands-on gardening for production of cereal crops and wild 'vegetables' like fat hen. Very young children would have become skilled at gathering fruits and nuts and water collection from springs, wells or local streams. Meat products would perhaps have entailed being used to tending domestic animals like hens, pigs and goats. Other meats might have come from horses no longer able to support a human or pull a basic vehicle, and wild animals like deer. Venison may not have been regular meat consumption but would have perhaps been eaten at more special times like festivals. The consumption of venison would have entailed hunting the deer.

Southern Scotland and Northern England, my target land areas in Before Beltane, would still have had considerable forest areas 2000 years ago. Even though during the Bronze and Iron Ages, deforestation was an effect of the inhabitants needing copious amounts of wood for building homes, for heating and cooking.

In AD 71, when Before Beltane takes place, there would have been red & roe deer roaming the forests. They are the only indigenous species to Britain, the fallow deer having been introduced to Britain in approximately the. 13th Century.

During my research into deer, to include a scene where Nara is teaching some younger priestess trainees to hunt and stalk, I re-learned a few new things. When a teenager myself, I was a Girl Guide and achieved some outdoor badges which included 'Pioneer', 'Camper' and ' 'Stalker'. Things I'd learned about woodlore had been forgotten but writing Before Beltane has revived some of them. Here are a few about deer hunting.

When I'm next in a forest will I remember these tidbits? Probably not, but Nara ensures her trainees are aware of them in Before Beltane. 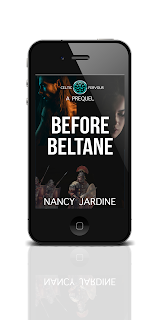 Posted by Nancy Jardine Author at 20:33