The day has almost disappeared, some of it spent doing some further research in preparation for writing a post for a Blog Tour that's being organised for Before Beltane in May. Time being at a premium, tonight I'm posting an excerpt - from Lorcan's story. 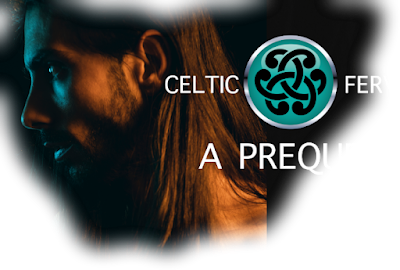 At this point in Lorcan's story, he has already experienced a couple of potentially deadly adventures during one particular day by the time he arrives at the roundhouse village of a Carvetii friend of his.

“Lorcan of Garrigill!” Cynwrig declared as he sped down the room in an amiable welcome. “It has been a while since we spoke together…” The chief broke off his greetings.

Lorcan absorbed Cynwrig’s stare of assessment, yet he also watched the man’s attempt to suppress the  entertainment that laced his expression.

“I can see your journey here has had its moments, Lorcan of Garrigill. But, since you are still standing on your own two feet, you can explain your disorder to me later,” Cynwrig quipped.

Lorcan absorbed the hearty clasps at his shoulders, knowing they were genuine ones, though winced when a new bruise was inadvertently thumped. His attempt to return the easy grins of Cynwrig – a man he was more than happy to name as a good friend in addition to being a reliable contact – was stiff and awkward, his cheeks frozen with cold and other traces he did not care to acknowledge.

“Your timing is not the greatest, my friend, since we have already eaten the best of our meal, but my hearth is yours for as long as you need it to be.” The chief made his declaration before he accepted the snow-clad spears that Lorcan held forth in front of him, the tips purposely pointing towards the roof timbers and displaying no threat.

“There is a story to come about one of these.” Lorcan kept his volume low.

His information made Cynwrig smirk again. “I can well believe that.”

Posted by Nancy Jardine Author at 23:08