Welcome to my 17th April blog!

If you celebrate Easter, or Ramadan, or Jewish Passover, or any other religious festival then I wish you a happy day. 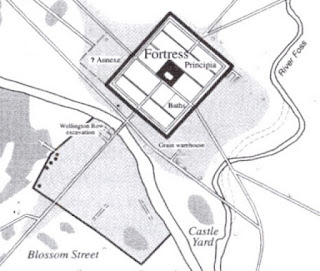 AD 71 is the acknowledged date of the beginnings of the fortress built at the site the Romans named Eboracum. It was fairly customary for the Roman legions to explore the countryside for areas which would provide the best conditions for them to create a more permanent base. Though they do seem to have been extremely efficient at building a fort/ fortress for themselves, it still took a while to find, cut down, and amass the wood supplies needed for the fortress ramparts, and for the interior buildings.

Establishing an encampment at the chosen site allowed the legionaries to have a protection for themselves during the construction phase of the fortress. It’s very difficult to determine exactly when the very first timber foundations were laid at Eboracum, but 71 AD is the generally accepted date.

This falls into the possible overlap of the governorships of V. Bolanus, and Petillius Cerialis whose term as governor began sometime in 71.

Before Beltane is set in 71. King Venutius sends Lorcan, and a couple of other warriors, to do some surveying of the already established encampment at Eboracum. Though they see a well-set-up camp of tents which can house thousands of men, they also see more soldiers approaching from the south to join those already there.

So, why did the Roman surveyors/ land engineers choose the site we now know of as Eboracum?

The site needed to be near enough to the area inhabited by the Brigantes, the largest tribal grouping of northern Britannia. It needed to be able to be well-defended since it was essentially going to be occupied by an invasion force. It needed a plentiful water supply with sufficient wooded areas nearby for construction timbers, and wood for heating and cooking.

York/ Eboracum is situated on a slightly elevated piece of ground that conveniently nestles near the confluence of two rivers, the Ouse and the Foss. It was a perfect site since the River Ouse carries on all the way to the eastern coastline of Britain and was sufficiently wide and deep enough for flat bottomed boats to ply up and down the river. They would have provided supplies, which probably included men, food stocks and the ironware/ hardware necessary for a huge military campaign to suppress and subdue the whole of Brigantia.

The above tombstone is of Lucius Duccius Rufinus and is dated as being somewhere between 71 and 125 AD. It's less likely to have been the earlier date since the fortress was only being established but it is a substantial monument of dedicated to a standard bearer of the Legio IX Hispana.

The four corners of the fortress were situated at the compass points N, S, E and W with the main fort streets, via principalis and via praetoria, running diagonally as seen from a ‘birds-eye view’. Built by the Legion IX Hispana, they may have taken the name from the locals who possibly named it Eburacon – the place where the yews grow, or the place of Eburos. At some time after the initial building, the legions possibly thought the place had associations with, and was to do with boars so they adopted the boar as the emblem of the Legio IX.

Anglo-Saxon invaders renamed it as Evorwik, and even later the Vikings repronounced it as Jorvik, leading to the one we know of today as York.

Posted by Nancy Jardine Author at 21:23