Hello! It's Day 19 of my April blog posts about Before Beltane.

Today's theme is the goddesses mentioned by Nara. It's reasonably easy to do an internet search to find out a little about Celtic goddesses, but it's not so easy to be sure that the information found is legitimate. Since actual written references to goddesses of northern Britannia are scarce to the point of mainly being from epigraphic sources, being sure of what was a god/ goddess name in a particular geographic area is almost impossible (for me).

Nara is of the Selgovae tribe, and from the Ptolemy map references noted around 120-150 AD, the Selgovae probably inhabited what we'd now call the central areas of southern Scotland. I spent some time trawling the internet, and my own stock of Celtic books, and made my own decisions on which names to use for the situations Nara finds herself in.

We know from Ancient Roman texts that people of polytheistic faiths tended to pay homage to a huge list of deities, some local and some more universal. One site I visited mentioned the possibility that the Iron Age peoples of Britain may have worshipped as many as 300 deities. That seems way too many for the average person to remember. So it seems judicious, to me, that each person may have been taught to revere a small list by their parents/ druid teachers/ local elders. Moving away from the area that a person grew up in, whether on a temporary visit or for a longer duration, was probably likely to have exposed that person to a number of new-to-them deities that they absorbed into their repertoire.

Choosing personal favourites to worship seems realistic, so that's what Nara (and Lorcan ) do in Before Beltane.

A search of the internet brings up many variations of what a goddess was revered for, but I did a bit of picking and choosing so that they fit the scene I was writing.

Arianrhod is quoted as the goddess of fertility and rebirth. Aspects of her name indicate a silver wheel, the wheel of time and she is associated with life cycles and the interweaving of fate and cosmic time.  I've also seen her quoted as the goddess of karma and retribution. She is in other places linked to the moon. Other common spellings of her name are Aranhod and Arianrod.

Rhianna (Rhiannon) is also associated with fertility. She's linked with the moon, and over night and death.  Her name is believed to mean “night queen”. Horses are also associated with Rhianna linking her to the goddess Epona. The great queen- Rigantona- may be another name.

Brighid 'oversees' may aspects, quite a varied collection of daily rituals regarding domestication- poetry, prophecy, healing, agriculture, and fire. She is sometimes seen as the goddess of the hearth. She is also thought to be a triple deity: the healer; the inspiration of the poet and contrastingly the smith. She may have had some domestic animal associations. Brighid's festival is Imbolc (1st Feb.),a welcoming to springtime.

Dôn is probably of Welsh origin and is believed to be the mother goddess, and the mother of Arianrhod. I 'borrowed' Dôn since I need a goddess to be the 'founder' of the nemeton on the Islet of the Priestesses in Before Beltane.

Coinchend isn't quite a goddess but is a female warrior of the Otherworld, semi divine and a spirit guide. 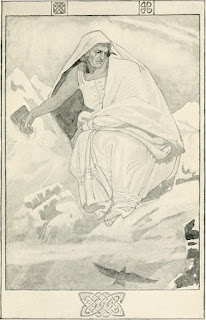 I've left Cailleach to last since this is the most notable name in Scottish folklore and forms of Cailleach are part of place names still used in Scotland. I've used the Cailleach (Bheur) in other books in the Celtic Fervour Series. She is the old hag, a destroyer goddess who ruled over disease, death, and wisdom. She had a function during seasonal rites and weather magic. In Ireland she is known as the Cally Berry -  meaning “old gloomy woman”.  Weather, the seasons, winds and winter were under her control. She appears as a veiled old woman, and was a protector of animals, particularly wolves.

Posted by Nancy Jardine Author at 22:57