Hello again and welcome to Day 18 of my April blog posts about Before Beltane.

Horses feature quite a bit in Before Beltane since they are both beasts of burden, and the main non-pedestrian transport method for my characters.

The Celtic peoples were horsemen who valued their beasts very highly, some even considering them their most valued possessions. It took time and patience to train horses and they were expensive to keep. However, this is a good time to point out that the animals referred to in Late Iron Age Britain were what we would term ponies today. 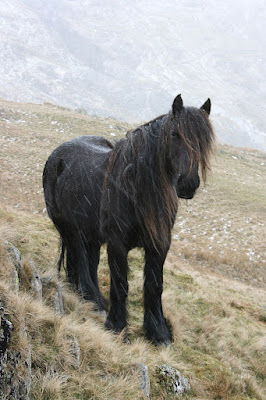 The Fell pony is an ancient breed, used to the harsh conditions of the Cumbrian highlands and is probably similar to the ponies that were common in northern Britannia of 71 AD. Fell ponies grow to around 14 hands high, at best, and could be ridden by children and adults. They would have been agile enough for pulling along the smaller Celtic chariots that would have been both status symbols of wealth, and also symbols of prowess in battle. Fell ponies are often black but can be brown, bay or grey.

Dales ponies might also have been commonly kept in northern Britannia, though they tend to be smaller and generally reach a maximum height of just over 12 hands.

Further south in Britannia the horse stocks may have been more influenced by New Forest ponies, another very ancient breed. They are often chestnut, bay or grey in colour.

Roman horses are more difficult to determine. In my writing I know what purposes I have for Roman horses when included, but describing the breed of horses they ride is tricky. It’s hard to find definite information on what kind of horses were most commonly ridden by the Roman cavalry, but it’s believed that some horses were transported over to Britannia from the continent (probably Gaul).  It's known that Roman soldiers (cavalry and officers) rode Iberian horses, an ancient and hardy breed. Ancient Iberian horses (of which Andalusians are descended) average about 15.1 hands high. 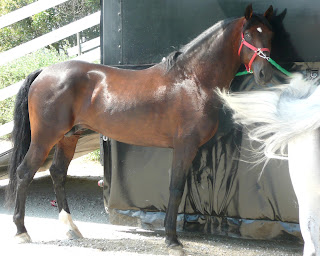 The horse above would do absolutely perfectly to represent the horse I mention in Before Beltane. Near the end of Nara's story, the warrior Cearnach is instructed to take a Roman chestnut stallion to a Selgovae hillfort named Raeden, where the local chief has a Roman mare, thought to be of a similar breed, that can be used for mating. Chief Callan of Tarras has named the chestnut stallion Rowan. Rowan becomes a very important horse in Book 1 of the Celtic Fervour Series, The Beltane Choice.

Another horse which features in both Before Beltane and The Beltane Choice, is the filly that Nara rides, named Eachna. Eachna is imagined, by me, to be more of a Fell pony.

The Asturcon, an Iberian Celtic pony breed, may also have been ridden by Romans in Britannia. Pliny the Elder mentions this horse, though it apparently had an unusual gait.

You can read about horses in Before Beltane by:

Pre-Ordering a Kindle copy HERE, or buy a paperback HERE.

Posted by Nancy Jardine Author at 21:52