Welcome to Day 22 of my blog posts on some aspect in Before Beltane.

Today is about the weapon that was commonly used in pitched warfare in northern Britannia during the era I write about.

Lorcan finds that a spear is all too sharp right at the beginning of his story. The spear, having been wielded by a hostile Brigante is of the type used by the Bronze and Iron Age tribes for millennia – a hunting spear.


The spear would typically be a wooden shaft with a spear tip for piercing the flesh of the prey. In the most basic spears it would be the wood itself that was sharpened to a deadly point. Some spears would have had a fire hardened wooden tip but others had a bone, flint, bronze, iron or steel point fastened to the pole. The typical tip shape was a triangle, lozenge (diamond), or an elongated leaf.

Later in Lorcan’s story, his young companion from King Venutius’ stronghold finds himself the target of a Roman spear, a pilum.

A Roman pilum, or javelin, was a spear often around 2 metres (7 feet) long. The Roman auxiliary or legionary used the pilum for thrusting towards the enemy, or for a long throw. The Roman pilum usually had an iron shank which was joined to the wooden shaft by either a socket, or a flat bracket. The tip was more of a pyramid shape of hard metal, of iron or steel. The shank was a softer metal and it’s thought, by some historians, that a softer shank would be more likely to bend on impact. Though this theory seems yet to be proven. If such buckling of the shank happened, the weapon would have become useless to the enemy since to pick up an already bent weapon, and throw it back at the Roman lines, would have been pointless as it’s trajectory could not have been guaranteed. 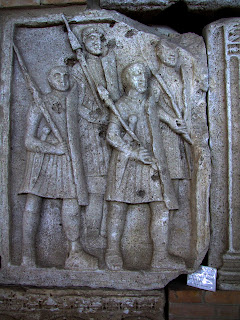 If the pilum impacted on a Celtic shield and buckled, then the Iron Age warrior (Briton) would have had a useless shield. It would have taken time to yank the bent pilum from the shield, time the warrior did not have during an active engagement with the enemy.

Vegetius, a Roman writer of the fourth century AD/CE wrote in his work De Re Militari:

“As to the missile weapons of the infantry, they were javelins headed with a triangular sharp iron, eleven inches [279 mm] or a foot long, and were called piles. When once fixed in the shield it was impossible to draw them out, and when thrown with force and skill, they penetrated the cuirass without difficulty…

…They had likewise two other javelins, the largest of which was composed of a staff five feet and a half long and a triangular head of iron nine inches [230 mm] long. This was formerly called the pilum, but now it is known by the name of spiculum. The soldiers were particularly exercised in the use of this weapon, because when thrown with force and skill it often penetrated the shields of the foot and the cuirasses of the horse.”

Posted by Nancy Jardine Author at 22:35