On my Welcome Wednesday slot I'm delighted to be interviewing a fellow Crooked Cat Author - Maggie Secara. Maggie mingles the genres of historical and fantasy in her Harper Errant Series- but that's only part of her writing to date. Settle in for a great read because I asked her these questions...

Having read Book 1 of your Harper Errant series -The Dragon Ring - I know that your writing style can also be said to encompass time-travel and fantasy. Which other descriptors would you use to explain the genre-mix of your series to a potential reader?

Oh, so many things! The existence and impact of Faerie magic on the mortal world provides a mythic element as does the deep influence of fairy tales and folklore. Each book begins in the modern, mundane world, but it‘s a world with strong magical potential. The only magic is what already exists in imagination, but particularly in music. But in Faerie, which is always no more than a step away if you know how to take it, music and magic are the same thing.

So let’s see, the series is historical in that to accomplish their mission, my heroes must spend time with people in England’s past—some famous, but mostly not—and I’m a stickler for historical verisimilitude. The people they deal with all have stories of their own, too, so it’s more than just a setting. There’s an element of urban fantasy, except that the cityscape of London might be Roman, Victorian, Elizabethan, Restoration as well as modern. In one part of King’s Raven, it even crosses into steampunk. You could almost call it Charles de Lint meets the Time Machine.

Which would be your preferred Amazon listing for your Harper Errant series?
I would be happy with historical fantasy if it weren’t already so crowded. It’s so hard even to get people to see your cover if it’s buried too far down.

Do you think where Amazon places your novel is crucial to potential sales?
I suspect it is, at least for readers who search for new books that way. I have no idea how many people actually type “historical fantasy” into the search box.

I wish I knew the answer to that, too, regarding my novels being  'historical romantic adventure'.

Raven was my favourite character in The Dragon Ring. What do you think makes him a well liked character?
I love that he’s so popular, although I suppose I should be annoyed that the sidekick has a stronger following than the main character. I think that happens a lot, actually, in all kinds of stories but particular in adventure. The main character, the hero, has the burden of command, the burden of the quest or whatever. He’s the one who has to survive each test only to face a greater one and learn as he goes. The sidekick gets to be the class clown, the flirt. He’s generally more playful, and god knows Raven is playful, but he also has a hard edge. His rare anger makes him dangerous, and that makes him romantic.

Ben is more even tempered, more ordinary. He has to make a living, he loves his wife, he worries about his kid. He’s not dull or boring, in fact, he’s actually more courageous of the two. But he’s definitely more like someone the reader might know, or maybe even the reader themselves. He’s the ordinary guy among extraordinary people in fantastic circumstances. Someone has to be.

You have a lot of sound historical content in your novels – do you enjoy the research necessary for this? Is time spent on research something you don’t mind doing, even if you get sidetracked?

I do love it. And getting side-tracked is a danger, but so is promotion and doing interviews and writing blog articles. Of all the distractions, the research is the most fun! My stories don’t generally deal with the great moments in history, but with ordinary people which means I need details of ordinary life: how they dressed, or ate, or did their hair. Some of that is painstaking, some is simply spot research. When I had Susan reading a Dickens novel, I had to make sure it was one that was published before the time of her story, not 10 years later. An easy google and I’m back to work, or it would be till I discover that Dickens also wrote for the paper that Ned Donovan works for, and now I’m researching mid-Victorian journalism. The current work in progress would have been started much sooner except I am bringing it much closer to home, London during the Blitz, and that took a lot more prep since it’s an era I don’t know as well. But it’s all worth it for the final effect.

Yes! I completely understand about getting those fine details correct and ensuring some reference that's made isn't out of the historical time sequence. I'm a stickler, as well, for making details fit properly. What do you think was the hardest aspect to focus on during the writing of your three Harper Errant novels?
Each book got progressively more complex, with multiple viewpoint characters and timelines. Keeping track of each thread, and simply not forgetting (or contradicting) something significant has been a serious challenge.

I understand that, too, and personally find that eliminating errors is down to lots of re-reads and scrupulous self-editing. Do you use a number of beta readers before you get to a final draft stage, or are you a go it alone author who goes straight to your publisher/editor?
On the first book, I just kept working, revising, editing, revising, adding more, filling in the plot holes and then trying to find an agent. Once Crooked Cat found me, there was no time for beta, since it was already with the publisher! Since then, I’ve made time for a beta review at some stage. I don’t write for the committee, though.  For a short story, I trust myself to see what needs to be seen, for the most part.

What do you find is the most rewarding thing that you get from spending the effort and time on your writing?
Applause! No, seriously, people read my books and tell me how much they like them. I just wish there were more of them, so I could quit my day job! But fantasy is one of the smallest genre audiences in the publishing world, and my books don’t slot neatly into any one category of it. So I take my rewards where I find them.

Ah, indeed! Pleasing the reader is such a tricky one, Maggie. Finding readers to publicly show appreciation via a review, I find, is extremely difficult, especially if the work  is 'slightly outwith' genre niches. How the work fits is a vulnerable thing, in my opinion, because a reviewer might like one aspect of the story eg. the historical detail but not the romance...another might enjoy the developing relationships/ romance but not enjoy the historical detail about a battle or the current political influences which cause situations to occur. Like you, following a standard genre formula isn't the kind of writing I want to produce.

What do you think is the value of a site like Wattpad? Do you use it for ‘airing’ writing that will appear verbatim in a new novel? I ask because although I've joined, I 'm not yet sure of what to add to the site for fear of causing copyright issues for myself at a later date
I’m still uncertain about the value, but it does give me a place to publish small things and, hopefully, to expand my audience. But like any social media, it takes attention! In fact, I should add something this week. Mainly I’ve been posting what I call my Spared Darlings. These are snippets of perfectly good writing that had to be left on the cutting room floor for one reason or another. I can also post short or experimental pieces, or stories that haven’t found a market. I also have a fan group on Facebook. If nothing else, I think it keeps the readers from wandering off between books. I know I’ve lost track of a series before because of the time it takes to get a book to print. This way, my fans always know where to find me. It also gives me a place to share events, related materials, links, and interviews like this one that they might otherwise miss! My online following is still rather small, but I’m hoping that word will get around and it will grow. If it does, at least there’ll be something for them to read.

Can you share what you’re working on just now? 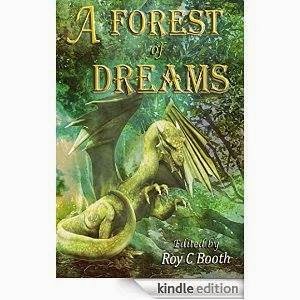 I’ve been trying to write some short stories this year, a skill I was never very good at in the past. In fact, I have a story coming out in a new anthology this week called A Forest of Dreams, edited by Roy C. Booth!

The new book I’m working on is called The Face in the Wall, and it will take Ben and Raven to London during the Blitz, Scotland after the battle of Flodden, and a mysterious island of echoes somewhere in the ancient past where the queen of Faerie is held hostage by dark rivals to Oberon’s mastery of the Twilight Realm. It has taken a while to get started properly, and it’s definitely a challenge, but I’m very excited about seeing it through.

Great answers Maggie, thank you.
From The Crooked Cat Publishing website:
As a writer, Maggie Secara loves to explore the heroic ideal, to find the mythical in the every day, and discover the places where the realms of Faerie intersect the mundane. As a historian, she calls herself a gossip who just can’t stand that someone might have done something 400 years ago without her knowing about it, who else was there, what they had for dinner, and what they were wearing at the time.
Maggie’s poetry has appeared in a variety of little magazines on- and off-line since 1995. In 2011, she finally published the romantic pirate adventure that has been haunting her since college. Most recently, her interests in history, folklore, and music have combined in a series of fantasy novels with a historical twist of which The Dragon Ring is the first, she hopes, of many.
Having traveled in her youth through great swathes of Great Britain and Ireland by bicycle, train, and thumb, she hopes to get back one day soon. In the meantime, Maggie and her very understanding husband live with their cats in suburban splendor in Los Angeles, California.

Thank you for coming today, Maggie. Best wishes for fabulous sales of all of your writing.