Another Thursday is upon us!
The day promises to be good in the afternoon but presently it's one of those grey mornings that we seem to get a lot of. If the haar ( low lying mist) clears we'll be in for a treat. 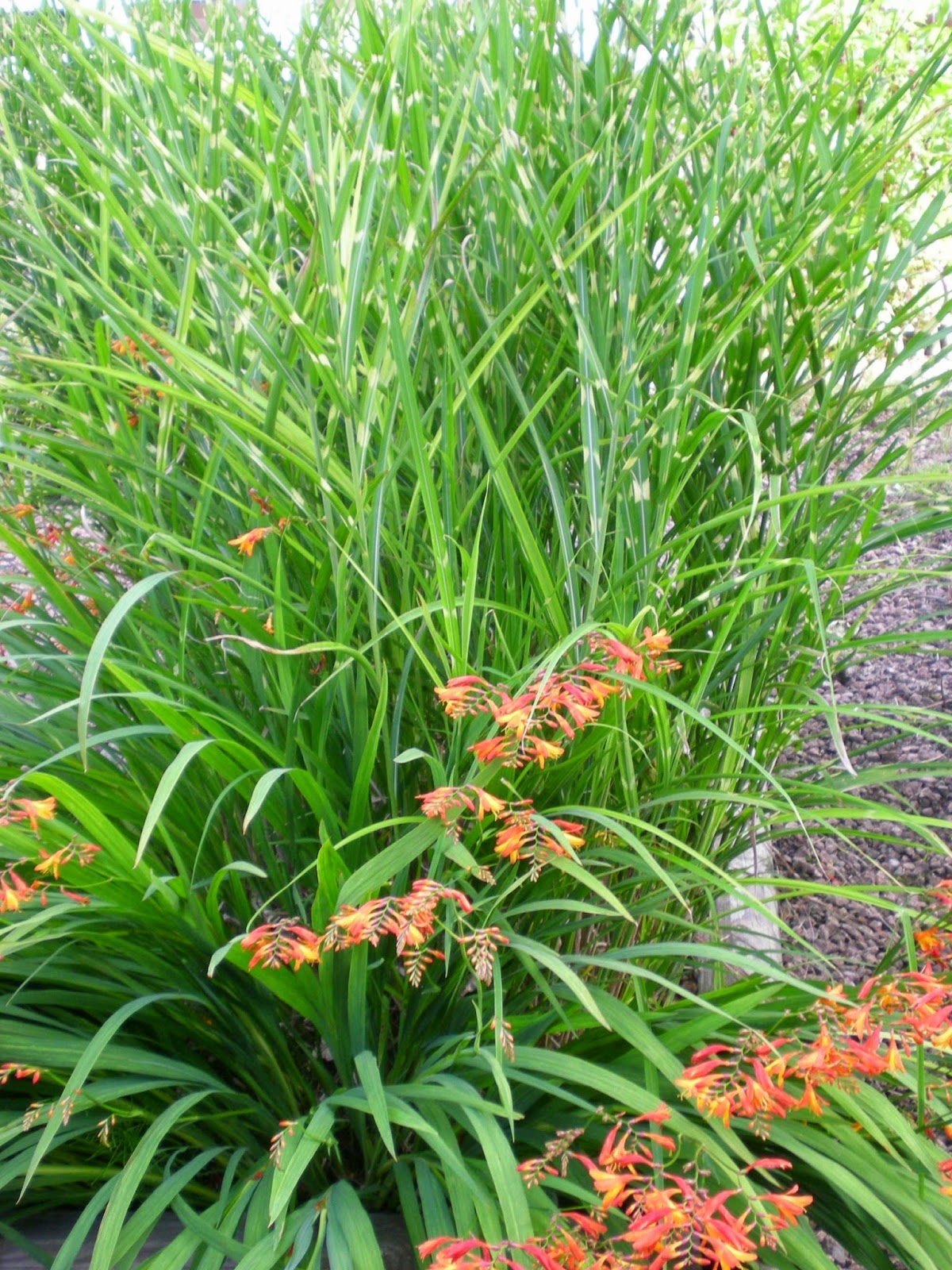 There are tidy up jobs for me to do in the garden and a bit more digging of the raised bed that's minus most of the conifer roots from last year. I need to get going with the last root removals, and get some spring bulbs planted before I miss that seasonal slot.

On grey mornings there's not a huge amount that looks cheery and sundecked but here's a plant I like because of the contrast. My zebra grasses stand tall and firm against the cheerier montbretia flowers.

Apart from intermittent childminding, my intention is also to complete more chapters of my already infamous time-travel for early teens. It was named Dabbling With Time ( and that's an irony sonce it's taking me so long)  but even that is under reconstruction. I've an idea for the title (again) which I'll be sharing soon...and perhaps get your views on it?

I'm liking my novel a lot more as I make a lot of changes - though I still quite like some of the out-takes. Here's one of them.


In a line, they easily crossed the ford, given that the stones in the water were fairly flat. Striding after Gypta, they followed the riverbank. A short while later Aran dared a glance behind him. His height, being more of a match, made carrying the carcass a lighter burden for the warrior. Tyrnan now strode along with a smirk on his face rather than the determined grimace he’d worn when he’d borne most of the load.
“Duhlain!” Gypta’s voice startled the silent progress as she shouted back to him. “Your father, Mogran, will be very proud of you. You have taken another step nearer your warrior’s mark.”
Aran looked back. Duhlain’s face glowed with pride as he muttered his thanks.
Gypta kept talking although she continued to reel forwards. “And Fingal also acquits himself very well. His sword expertise on the mock battle field becomes legendary. You must be very proud of your step-brother, because he has the makings of a mighty warrior.”
Tyrnan’s loud laugh boomed out heartily behind Aran, the first sign that he had a human side. “Aye, Gypta. Fingal has yet to best me in the wrestle, though he is good, very good.”
“We all know how much you strive to remain our tribal champion, Tyrnan.” Gypta’s laugh rang out. “But some day you will meet your match. The first sons of Mogran are a force to be reckoned with.” Turning around she looked to the back of the file, to Duhlain. She winked. “And Maga is shaping up well too. She bears arms very well for her twelve summers.”
Very much to Aran’s surprise Gypta explained her information. “Maga is Duhlain’s older sister and she is now very good on the practice field. She was bitterly disappointed this morning when she was left behind with her mother to do domestic duties. She has been itching to go out on the observation treks with the warriors, but her time for that is still to come.”
The talk turned to the training ground, of other people and their prowess with new weaponry. Aran knew it was idle chatter and certainly nothing of defensive importance that strangers could use to their advantage. Their talk was of practising mock battles - though with real weapons, real chariots and shields. He’d felt Tyrnan’s blade prick into his neck. That had been real! He was edgy in case it happened again, though fascinated at the same time.
Gypta and Tyrnan discussed great battles to come. Who would they be fighting? Aran wondered if it was neighbouring Celts. Was that why they were so suspicious? Did they think he and the twins were spies for a rival tribe? On balance, Tyrnan’s distrust of them indicated that might just be why he was so suspicious.
“Tasca learns well with her pony now, Princess Gypta.” Tyrnan’s face held a hint of pride.
“You would say that, Tyrnan. Your sister was in the race the day of my tumble and went on to win.” Gypta sounded really vinegary as she turned back to Tyrnan, her eyes flashing fire. “She has learned well, but the credit must go to the master charioteer who drills us with a will of iron.
“My sister does not yet control her chariot as well as you do, Gypta.” Tyrnan’s answer was low and consoling acknowledging that Gypta was by far the more skilled driver. “But she learns quickly.”
Aran absorbed their chat thinking it’d be really brilliant if he could be in a chariot race. He’d organised more javelin lessons as part of an athletics programme during his school summer, though maybe before then he’d get some practice here - with real spears? A beaming smile broke free. That would be really cool!
Brian, on the other hand, looked apprehensive as he glanced over to him. Aran knew his best mate wasn’t keen at all on the weapons training: not his cup of tea at all for Brian was useless when it came to throwing things. Brian’s skills definitely lay in playing musical instruments and in brain power, but rarely brawn - except of his own chosen kind. He wasn’t a wimp. He was actually very fit, though mostly he avoided anything that resembled team games. Aran chuckled; well aware Brian would resolve to avoid the training ground at Balbath if he could.
As they continued their walk along the riverbank the three from Balbath talked a lot, yet never questioned Aran or the twins. Aran thought that a bit odd, yet realised Tyrnan took him at his word when he’d said he’d only talk to Tuoch.
Gypta suddenly asked if they had already journeyed far that day.
Brian answered. “Yes indeed, Princess Gypta. We’ve travelled for a very long, long...err…time…today.”
Aran looked at him quickly, alarmed in case he was about to give the game away. Fortunately, Gypta assumed it meant that they had walked for miles and miles. “Then you will appreciate some rest when we reach Balbath.”
Flat ground beyond them looked like heavy marsh land peppered in places by a few rounded shapes, smoke billowing from their tops. Celtic roundhouses? Aran was sure they were. Shapes moved about, some human, though others were herded animals being driven into wide enclosures next to the buildings.
People!