Familiarise Friday is delighted to welcome Jerry Hough, a young man I 'met' some weeks ago. He might have started off with what seemed like a big problem, but he had fantastic ways of getting around that, and is quite a character!

Jerry Hough has come along today with his creator, Jeff Gardiner, who wrote Myopia - published by Crooked Cat Publishing.

And... when you've met Jerry, please hop on over to Jeff Gardiner's blog where he's interviewing Keira Drummond, my character from Topaz Eyes. You'll find her at http://jeffgardiner.wordpress.com/ 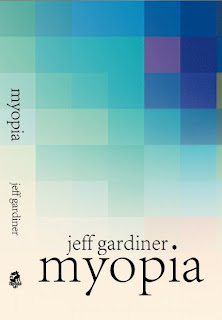 I asked Jeff some questions to get to know him even better since reading, and really enjoying, Myopia.

Where do you hail from?
Crawley, West Sussex – born and bred. Some people dismiss it as just a New Town near Gatwick Airport, but we did this project at school which shows there’s lots of history from Victorian and even Medieval times. Crawley is a major town with lots of history. My dad keeps reminding me that the band The Cure come from here.

Well, as a Scot, I've been to Gatwick quite a few times but it's only been in transit through the airport. Are there any drawbacks to where you are currently living?
No, it’s a great place to live. It gets criticised (mostly from people who live in Horsham) and it can be noisy on a Saturday night, but it has great parks, an amazing cinema and state of the art sports centre. Plus Crawley Town F.C. are now in the Premiership and are going to win the Champions League this year.

I get the impression there's nowhere better than Crawley, but given the world as your oyster - what would be your ideal place to stay for a month?
India. First because it’s exotic and hot. Secondly, I could go with Mindy and visit her family. Her dad, who’s a really cool guy, was born in Bengal which sounds beautiful. Then he moved to Hyderabad where the family now live.

What would you do there that would be different from what you normally do in a day?
Not go to school! Spend some quality time with Mindy and have a break from lessons and being bullied by those gits Wayno and Rhino.

They certainly were pretty harassing! Tell me 6 things about yourself.
That’s a bit personal isn’t it? Oh, okay ... I’m short-sighted; my best friend is Silu; you may have worked out by now that I fancy a girl called Mindy (full name Parminder Sidhu); I hate Wayno more than anyone else in the world; wearing glasses is truly bad for my street-cred; and, finally, keep this to yourself, but I think I might be developing these special powers – but that’s top secret and if you tell anyone then I’ll probably have to kill you!

Down boy! Put James Bond back into your pocket.  Seriously though, how would your girlfriend describe you?
Mindy seems to think I look cool in my specs (she’s the only one). She is a bit concerned about my behaviour at times – but I can’t tell her about Myopia ... not yet.

Sounds like you want to change your lifestyle. What would you change first?
I want to be stronger, taller, handsome and generally more heroic. I need to learn how to stand up to Wayno and Rhino. My dad says I have to be more assertive, which is different to aggressive; and I’ve been reading about how to be assertive without being arrogant or cocky. I don’t want to end up like those two chavs.

That seems like a good plan. So, ignoring them - what's your main form of relaxation?
Football. I play when I can and I support Crawley Town, who ARE going to win the Champion’s League this year! I hate shopping (except if I’m with Mindy, of course).

What kind of novels do you tend to read?
I’m a teenager ... I don’t read! I play on my X-Box. My teachers are always wittering on about reading and I’m supposed to read every day and keep a reading journal which is so stupid. My mum makes me read a few times a week. She’s always reading.

Well, you know, as a former teacher, I do have to say reading IS good for you. What do you see yourself doing a year from now?
I have a plan formulating in my mind which is going to stop the bullying once and for all. There’s lots to think about and plan if I’m going to get it right. So in a year’s time I can throw away the ‘victim’ sign on my back and be in control of my own destiny. Wish me luck.

By that time you'll want something different. Imagine this. You’ve been given a ticket for unlimited travel. Where would you go, and why go there?
I’ll follow Mindy to the ends of the earth! I want to be with her on a secluded beach in the sun, rubbing sun-tan lotion all over her beautiful ... uh? Oh, sorry I’ve got to go - I’m late for my dinner and my dad’ll ground me for a century. Cheers and don’t forget to text me ...

Bye, Jerry! That was great talking to you.

“Oi! You four-eyed freak!”
Jerry is bullied for wearing glasses. When he realises his short-sightedness is not a disability, but a different way of perceiving and understanding the world around him, he begins to see things from a new, unique perspective.

He even starts to believe he might have super-powers, but soon learns a great deal about himself and about the boy who is making his life such a misery.

As he becomes alienated from his girlfriend and best mate, both victims of racism, Jerry realises he needs to think hard and put his plan into action.

Has Jerry discovered a new way of dealing with prejudice?

Myopia is a novel about bullying, friendship and learning the hard way. 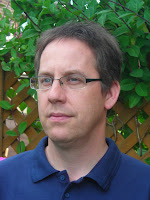 Jeff Gardiner is a British writer whose novel Myopia is published by Crooked Cat Publishing. His collection of short stories, A Glimpse of the Numinous, contains horror, slipstream, romantic and humorous tales. His non-fiction work, The Age of Chaos: the Multiverse of Michael Moorcock, has recently been revised, expanded and retitled in e-book form as The Law of Chaos. Many of his stories have been published in various anthologies and magazines in the UK and USA, and he’s also enjoyed some success with articles, some of which have even been translated into German.

You've got the spunk, Jerry, so I know you're going to have a great life! Thanks for featuring on Familiarise Friday. (You can also thank Jeff Gardiner for allowing you to bunk off school today!)

Read on to catch a great little excerpt from Myopia.


‘What, that speccy git in our technology group?’


‘Yeah. Oi! Goggles! Where’d you get the space visors from? NASA?’ Cruel sniggering filled the corridor.
As Jerry looked up his glasses slipped down his nose, so all he could see was a fuzzy mix of shapes and colours. He wrinkled his nose to lift his glasses back into his sightline but then remembered how it made him look haughty, so he prodded the central frame with his forefinger to slide his glasses back up his nose. Now he made out a double line of pupils, mostly from his year, making a tunnel leading to the outside door to the field. It looked like the rows guests make when a newly married couple leave their wedding reception, only Jerry didn’t think there would be as much jollity – or kissing.
This gang, made up of boys and girls, often stood here, threatening younger pupils who made the mistake of walking past. He knew he should be worried.
‘Oi, you four-eyed freak.’
One of the boys grabbed his blazer. Jerry let himself go limp. He’d been in this situation before.
‘I’m talking to you, dickhead.’
Jerry knew the speaker only too well: Wayno. Their noses almost touched. Wayno’s breath reeked and Jerry guessed brushing teeth was not a priority for him.
He wanted to walk away but Wayno held him tightly. Where were the bloody teachers when you wanted them? Always there when you don’t need them.
Wayno suddenly let go but Jerry felt himself tugged backwards until he stumbled into the corner under the staircase, surrounded by about half a dozen boys and a few girls. He was now being manhandled by a different boy known as Rhino, Wayno’s bodyguard.
‘On the way to the library are you, you boff?’
The library was actually in the opposite direction but Jerry guessed this wasn’t the time to be pedantic.
‘Are you gonna answer or what?’ Rhino snarled, spitting as he spoke. A fleck of saliva landed on Jerry’s cheek. His eyes flicked quickly between the framed limits of his focal range. As he began sweating he felt his glasses slip back down his nose. Too scared to push them back, he maintained his silence, glad the marauding bullies stood before him in a blur.
Before he knew it a hand appeared before his face but not with the velocity he imagined. Instead the hand hovered at Jerry’s eye-level, tilted with fingers pointed towards him. Then suddenly some fingernails clicked against the lenses of Jerry’s glasses.
‘Pretty useful in a fight these visors,’ said Wayno. ‘I can’t poke your eyes out – so I’ll just have to rip your whole head off.’
Many responses flashed through Jerry’s mind but he sensibly kept his mouth shut. It meant his tormentors assumed him stupid or easy prey but saying the words out loud would only earn him a visit to intensive care.
Suddenly his whole world fuzzed into a kaleidoscope of blurs as Wayno removed his glasses, leaving Jerry standing in a lonely world of short-sightedness. He could no longer see the bullies at all; not even sure any more of his location in school, having lost all visual markers normally putting things into context.
The crowd around him became unidentifiable blobs – weird creatures continually contorting, ebbing and flowing. It was impossible to see where one of them began and another ended; they all just merged into an insignificant mass of blobbiness. Jerry imagined them as one giant monster made of snot, which made him smile.
Although he couldn’t focus on faces he became aware of movements. Voices murmured, overlapped and buzzed but Jerry chose not to listen, preferring his own thoughts as he blocked out the world around him.
Where the hell were those stupid teachers?


Keira, from Topaz Eyes, would love to meet you! http://jeffgardiner.wordpress.com/

Posted by Nancy Jardine Author at 08:13