Today, I'm delighted to welcome fellow Crooked{Cat} author, Cathie Dunn, who has something wonderful to share with us. What inspires an author to write about a particular place in their novel? It's a question often asked, and it's sometimes a fantastic holiday which can be the trigger.  If, like me, you've never visited Normandy, France, you'll love what's coming! It makes me want to hop onto some ferry and pitch up in France to experience it all for myself.

I really enjoyed reading Dark Deceit, and now understand even better the places that feature. If you've not yet read the book, just imagine some characters living in some of the fabulous buildings below when they were new, and don't miss the excerpt at the end of the blog either,because that will be a great taster for you!

But it's over to Cathie now... 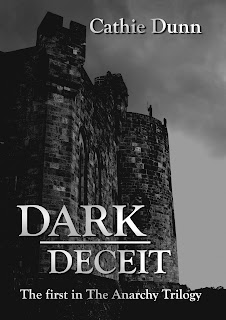 Thank you, Nancy, for having me here today. Such a pleasure to chat about one of my favourite locations, Normandy.

Normandy is one of the settings of my historical novel, Dark Deceit. Originally planned as a murder mystery set in Gloucester in 1141, I simply had to include Normandy after a holiday there. The county also fits in nicely with the political movements at the time, so it made perfect sense.

Hubby and I visited Normandy for ten days in October 2007. We stayed in a country cottage on the outskirts of the lovely town of Argentan http://www.argentan.fr/en/index.php, a place we could easily see ourselves living. Full of friendly people, great shops to browse for unusual items (we bought a trio of wooden giraffes and other fabulous things), and a walkable historic town centre that just invites you to explore.

Located approx. 50 miles from the coast - with all the touristy bits - it provided us with a calm haven to relax, and the perfect starting place for day trips.

One of my highlights was Bayeux (http://en.wikipedia.org/wiki/Bayeux), with its old buildings and narrow streets. Of course, we had to visit the Musée de la Tapisserie de Bayeux. I must admit, I cheated and, weaving my way against the flow back to the beginning, I walked through it twice (nobody else did!), simply to take in the exquisite details of the Bayeux Tapestry. It still wasn’t enough to spot each detail. It’s an incredibly moving moment when you stand in front of such a fascinating piece of history.

Falaise Castle (http://www.chateau-guillaume-leconquerant.fr/index_uk.php) is another incredible place, the location inspiring parts of Dark Deceit. Very little of the original structure still exists, but instead of letting it fall to ruin, the castle had a makeover (not the prettiest from the outside, but very impressive). The interior is now a maze of rooms filled with interactive details, projectors, audio visuals and other amazing features. One of the best castle museums I’ve ever visited - and I’ve been to lots! The town of Falaise has a small, historic centre, and is a lovely place for a stroll.

Mont St Michel (http://en.wikipedia.org/wiki/Mont_St_Michel) took a full day of our time, but was well worth it. Highly touristy, the monastery sits atop a hill with a narrow winding row of old buildings leading up to it. An amazing sight even from afar. Tacky souvenir shops and an array of cafes and restaurants lure you to to spend your money. We found a place serving delicious seafood and yummy Normandy cider where our basic French was appreciated. The monastery was incredible, though teeming with visitors.

The city of Caen (http://www.tourisme.caen.fr/anglais/index.asp) was another interesting place, although sadly many historic buildings were destroyed in the wars. But the old abbeys and churches still stand, and their exploration provided much historical detail.

As we zigzagged across Normandy by car, we admired the small villages, many centuries old. Visiting the small town of Mortagne-au-Perche - which I’d already marked as fictional Geoffrey de Mortagne’s home town - was another treat where I took lots of notes about surroundings, layout, etc. Buying a couple of Normandy history books - in French - has also proved handy whenever I need more research detail (especially taking care not to confuse my fictional Geoffrey with a real Geoffrey de Mortagne - a count living earlier that century!).

The WWII landing beach in Arromanches catapulted us forward into the 20th century. It was daunting place to visit, and you could still feel a hint of an atmosphere there. Sadly, any real atmosphere had long been destroyed by commercialisation. Tourists were milling around - some even looking bored - and we ended up translating information for a group of young British tourists more interested in beers and bars who clearly couldn’t be bothered to learn some basic French when visiting such an historic place (and who showed a sad lack of interest). I had to hold back not to growl at them. But that was the only annoying experience of Normandy.

With so many places full of fascinating buildings, castles, churches, links and museums, Normandy provides the historical fiction author with a paradise of research material. I took hundreds of photos and many pages of notes which I typed up quickly in the evening (I’d taken my laptop!). Learn a few words of French, and locals will be delighted to help you further.

I can’t wait to return.

You can view photos of my Normandy holiday and other trips on Flickr: http://www.flickr.com/photos/cathiedunn/

Dark Deceit blurb:
On his return from battle at Lincoln, Geoffrey de Mortagne, under-sheriff of Gloucester and spy for the Empress Matilda, assists a dying knight caught in an ambush. Promising to look after the welfare of the knight's only daughter, Geoffrey stays at her manor, investigating the murder. Keen to join the Empress on her progress through England, he is torn between his oath and his duty.

Left to defend her manor following her father's death, Alleyne de Bellac reluctantly accepts Geoffrey's support. As she doesn't trust the taciturn stranger, she asks Will d'Arques, an old friend, for help. But loyalties change. Her life in danger and her inheritance at stake, Alleyne must decide which man to trust.

Discover England and Normandy divided by a brutal civil war, where vows are broken as allegiances waver.


Here's a little bit about Cathie:

Cathie Dunn writes romantic suspense & adventure set in Scotland, England and Normandy. A hobby historian, her focus is on medieval and Jacobite eras.

She has two historical novels published: Highland Arms, a romantic Scottish adventure, and Dark Deceit, the first in The Anarchy Trilogy.

Recently, Cathie self-published Silent Deception, a romantic spooky novella set in Victorian Cornwall. All her books are available on Amazon.

Cathie lives in Scotland with her husband and two cats and currently works on a contemporary romantic suspense set in Idaho, US, and a historical Scottish romance.

And a bit from Dark Deceit:

De Mortagne placed his forefinger under her chin and tilted her face up before he dropped his hand to his side again. When their eyes met, she saw encouragement. And something else she could not identify. Something deeper. Blushing, she smiled and opened her mouth to thank him again. His kiss came as a surprise, warm and soft. It lasted barely an instant and at first she thought she imagined it. Then a wave of guilt engulfed her.
Alleyne took a step back and aimed at his cheek but he was quicker, catching her wrist just inches from her hand’s aim. Damn the reflexes of a trained knight! She steadied herself against the manor wall with her other hand.
“Forgive me, Lady Alleyne. That was most inappropriate.” He turned away.
“I could have you thrown out right now.”
“That wouldn’t help you much in catching your killer.” He stated the obvious, her empty threat exposed for what it was. His voice gave her a chill. Gone was the warm, soothing tone. She had almost believed him. But he was an under-sheriff, a lowly knight with unknown loyalties. One not to be trusted. She straightened her back.
Will must arrive soon. She trusted him.
“It won’t happen again,” de Mortagne said. “At first light we’ll be out of your way and focus our search on the forest again.” He walked towards the steps, but turned his head. “I shall report to you on our return, or to your steward should you so prefer.” Without a further glance her way, he took the stairs in swift steps.
She watched as he strode to the stables, his broad back straight and fists clenched. He kicked open the stable door. The door banged against something solid, the sound echoing through the silent bailey.
Alleyne closed her eyes. Her heartbeat pounded in her ears. If she aimed her anger at him, perhaps she could banish the memory of the eager anticipation she felt when he had turned to her. She shook her head to rid herself of the demons. No, she had not wanted for him to kiss her. All she needed was reassurance. Damn the man! Perhaps women threw themselves at him in Gloucester, but not here.
Not her.
She descended the stairs, careful not to slip. By now, the bailey lay shrouded in darkness. Inside the hall, the throngs of guests had dived deeper into their cups, their shouting and laughter loud in her ears. Alleyne brushed past them, up the stairs to her chamber, and bolted the door.
She had begun to trust him. How could she now? After this?
Will, on the other hand, would never have let her down in such a manner. After all the years she had adored him, he was still her chivalrous knight. The type minstrels sing about. Tears brimmed in her eyes.
“Oh, Will,” she whispered, her hands covering her mouth as she came to a halt by the narrow window. “Come quick!”

Thank you so much for sharing your holiday with us today, Cathie. It sounds so wonderful that I can't believe that I've never managed to travel much in France. My best wishes go to you for the contiued success of Dark Deceit.