Hello! My Tuesdays in July blogs on 'locations used in novels' ends today with a spectacular visit from Sandra Hunter. 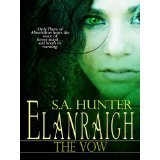 Sandra has brought along some fantastic photos for us to admire and a great story about why she set her novel 'Elanraigh: The Vow' where she did. I've 'sort of'' been to the area she's talking about and WANT to go back there! (More later on that)

Sandra attended school in Victoria, B.C. and later graduated from the University of British Columbia with a B.A. in English Literature.  After her daughter came along, she chose to work close to home and indulge her love of animals by working for an amiable, if thrifty, veterinarian. She believes in promoting the right of all creatures to live the existence that Nature intended. This value is strongly evoked in her novel.

Sandra’s always lived at the edges of ocean and forest, so it came naturally to have a sentient forest as a major character in Elanraigh: The Vow.  She loves kayaking the scenic Island coastline, swimming and walking. She has a ready sense of humor and an optimistic outlook (a good thing when you’re a writer).

Her publications include Dark Fantasy short stories in pro magazines and she is currently working on a sequel to Elanraigh: The Vow. Here's what Sandra has to say... 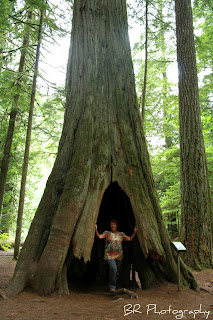 In 1995 I read an intriguing article in the Vancouver Sun, titled “Lumber firm wails the blues over “singing forest”. Apparently a local tree planter had a spiritual experience in a forest near Tenise Creek; she says, “something akin to the voice of angels rose from the landscape.” I tucked the thought provoking article away and some years later read the “singing forest” article again. I began to type and wrote, “The Elanraigh quivered with deep unease. Forest-mind sifted the westerly wind and breathed its warning.” And so a sentient forest came to be both a major character and the setting for my YA fantasy.

A local primeval forest is one of my favourite haunts to walk. Near my home in Parksville, on Vancouver Island, BC, is a forest reserve of giant firs, hemlocks and cedars, named Cathedral Grove. The biggest tree is 800 years old and rises 75 m (250 ft) in height.

The grove is aptly named both for its physical resemblance to a Gothic cathedral and for the sense of awe and reverence one feels as soon as entering the grove. Its straight and soaring trees rise branchless for 100 feet, before the dark green foliage fans outward and you tread the filtered sunlight below. Walking its paths you enter a living, breathing silence--these ancient giants whose spirits have been long revered by the Northwest Coastal aboriginal peoples and were alive when Columbus discovered America. 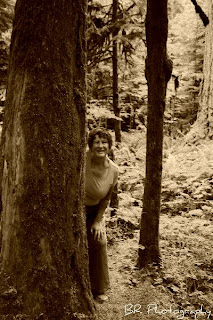 It is this environment of rainforest and stormy coast, both beautiful and ever changing, that so suited Elanraigh’s storyline and complimented a story of a girl’s coming of age and blossoming into power.

Just as an aside, in another scene of the book, my protagonist and her party have an encounter and battle to the death with a party of Memteth raiders. The setting for this scene is “Shawl Bay.” In my mind’s eye while writing, I envisioned MacKenzie Beach, located on the edge of rainforest, just outside the town of Tofino on Vancouver Island. Interestingly, it is this same beach that is used as “La Push” in the Twilight movies.

Thera doesn’t know why the Elanraigh forest-mind chose her, of all the Allenholme folk, to hear its voice and to awaken her gifts of mind and spirit. The Elanraigh sends a warning dream; black sails swooping toward Allenholme from across the western sea—the Memteth, an ancient enemy, armed with blue fire that hungers to consume life. As Thera awakens to her gifts of bonding with raptor birds and reading hearts, the knowing; she also awakens to love. Will she choose Chamakin the young Ttamarini warrior who is a kindred in spirit to her, or the polished young nobleman who covets her beauty even more than her estate? Forest-mind is aware she is yet too young for such power and responsibility. It has no choice—the lives of all Thera’s people and the existence of the Elanraigh Forest itself, depend on Thera fulfilling her destiny. Can she learn what she must of gift, and heart, to survive what comes their way?
Excerpt:
Thera strolled along, admiring the colourful variety of starry flowers growing on the vines that netted the lichen-blackened rocks. She glanced back-trail, and laughed to see Mulberry dancing at the end of her lead and nibbling at the pony’s rump.
Their small party rounded the bend; the trail now steeply descending toward the roar of surf. It twisted past some sitka spars and turned to drive its way through more gorsgrass.
Thera sensed something. A chill…she looked up to see if a cloud covered the sun. No. The sun’s light ignited the washed blue of sky and she shaded her eyes from its brightness.
Clenching her hand on her dagger she pivoted to look back again. Jon appeared as usual, he had removed his skullcap helm and was wiping his arm across his forehead, but nothing altered his swinging stride or easy demeanour.
Thera’s gaze narrowed. The horses were uneasy. Mulberry’s ears twitched and her skin flinched, as if she were bothered with flies. Jon’s mount tossed its head, eyes rolling.
Ahead, Swordsman Innic walked alone, as the path was narrowing. He frequently turned, though, to talk to Nan. Thera could not make out the words they said, their voices were strangely muffled to her hearing as if spoken through heavy layers of cloth. Neither Nan nor Innic appeared alarmed.
Thera shook her head. Now she suffered a sense of smothering, of struggling to draw breath into her lungs. She sent her senses out groping for an answer.
It was the Elanraigh.
The Elanraigh was immensely angry.
Thera felt a sudden silence like an indrawn breath held ominous and tense, then rage gusted forth. Her hand rose to her throat where her pulse leaped under her thumb. Never had she felt such as this from the Elanraigh before.
It was as if an advancing army trod the air with pounding footsteps.
Her throat tight with fear, she tried to cry out a warning. At the same instant, hundreds of crows burst voiceless into the air where they swirled in their unnatural silence, as if they feared to alight.
They must have seen each other at almost the same instant, the Memteth raiders and the party from Allenholme. The Memteth crew were bent over a freshly fallen sitka spruce they had dragged down to the beach. Their bright-bladed axes hewed away its branches and skin. Their gibing joviality indicated no awareness or regard for the spirit of the deeply shocked sitka. Their black-sailed ship lay at anchor some several horse strides from the beach.
The apparent leader stood to one side. His manner was both brooding and watchful. The armoured head swung from side to side as he scanned the beach and his partially scaled hand clenched an amulet that hung around his neck.
The Memteth leader’s strident yell and Swordsman Innic’s clashed in the air as they both cried out alarm.

Your area of the world is beautiful, Sandra. I made a very short visit of 4 days, to Vancouver Island, some years ago. The colleague of my husband who played host to us whisked us around at breakneck speed. I know I visited two beaches, a couple of forests (can't name any of them, though) and the beautiful Butchart Gardens in Victoria. (We did theVictorian tearoom bit as well) Our friends also managed to take us to the Okanagan Valley, and we took a 'post' boat along a totally beautiful fijord, stopping off for a bit when the post and parcels were delivered. It was fantastic!

My visit to the Vancouver area was so impressive it made me choose to make my heroine, Aela, in TAKE ME NOW, be from Vancouver!

That was a great story, Sandra. Thank you so much for visiting today and best wishes with your sales for Elanraigh.
Sandra finishes with...

Nancy, thank you so much for this opportunity to guest on your blog and hopefully “meet” some of your blog buddies, and present Elanraigh: The Vow, a Y.A. to Adult fantasy novel, to your readers.

Posted by Nancy Jardine Author at 11:04