My huge welcome, today, goes to another of my fellow Crooked{Cat}authors-Trev Ripley. 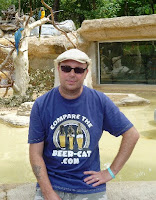 He might have a little difficulty with keeping in touch, though, since I've heard he's on an exciting trip to London-to join in with some of the festivities that are happening in that hopping city right now. We can have a great time, anyway, since he's given me a lovely treat to share with you. Not only do I have a very revealing little set of questions which Trev has volunteered some spectacularly candid answers for, but he's also given us a peek at how his illustrations came into being. Interspersed among his answers, you'll find some lovely little sketches. 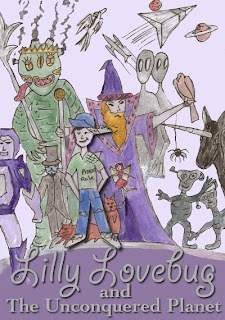 Lily Lovebug and the Unconquered Planet-Trev’s recent release- is in for even more exciting times.The cover design going to have a makeover, done by Horton Novak, for the print release of this fabulous novel, but before then you can see how his original cover came to be created!

These are the questions I put to Trev a few days ago.

How long have you been a published writer?
On 7th June 2012 my first book, Lily Lovebug and The Unconquered Planet was published by Crooked{Cat} Publishing.
Congratulations on your debut release, Trev. I love your cover. I've only read a little of the book, so far, but I'm loving it.  As a teacher of 11-12 year olds for years I'm pretty confindent there's a lot of young kids out there who'll love your story.
Do you only write in one genre, or for one particular age group?
I started with an adult thriller – have been writing it for over ten years – it’s great in places but other chapters I can’t seem to get right. I’ve shelved it numerous times, and resurrected it over again. Don’t think I’ll ever let anyone read it! As my style developed I moved into children’s stories, and Young Adult.
What’s the genre/ subgenre of Lily Lovebug and the Unconquered Planet?
It’s a children's fantasy adventure.
Tell us a bit about ‘Lily Lovebug and the Unconquered Planet’.
It’s funny, gory, and I’ve no idea how I thought of it!

Lily, a tomboy and brat, is actually the next Mother Nature. She doesn’t know it yet, but a visit from evil aliens and many new friends (Lily’s Outlaws) helps her discover the truth and save Earth, the only unconquered planet in the six known universes.
Were there any triggers which led to the plotline for Lily lovebug and the Unconquered Planet?
I simply don’t know! It probably developed from the bed time stories I used to make up for my own two daughters.

Who are the main characters of the story?
Lily Lovebug has  many colourful characters of animal, mystical, alien and zombie origin.
Do the names for characters just pop into your head as soon as you start a book?
Yes – I have an idea, then, I start typing. I don’t know the plot – it develops as I go along. The names of the aliens (The evil Gresslons) were fun to create – anything disgusting was considered.
That makes you sound like a 'pantser' - as in fly by the seat of your pants! Do you have to do any research for your novels?
I read a lot, and watch documentaries – to my family’s displeasure; they cringe when I impart new found facts onto them. I don’t need much information to get started – for example, a future book about body snatchers came from a documentary, and the British Museum has inspired a novel about Ancient Britons – If only I had the time!


Your book is illustrated, Trev. Can you tell us how you’ve acquired the images?
I’ve illustrated the E-book myself. My style is simple but passed the extensive  research (I showed a few kids my pictures and they liked Um!)

What will be your biggest writing related challenge in the coming year?
I’ve decided to keep my stories simple and shorter (around 30000 words). My challenge is which story to write first, I have them lining up. Unfortunately my Master’s degree keeps getting in the way!
Good luck with those studies. And, yes, I can see exactly how much time that would take, Trev.  (My hubby is just finishing his last year of his Masters and it’s taken a lot of his effort and time!)

What’s the hardest part of a novel for you to write: Beginning, middle and/or end?
Beginning – my imagination is my strength, and not my writing ability. The beginning has to be perfect to pass the scrutiny and catch the eye of a potential agent.
That sounds like not only an excellent answer-but great advice! What about settings? Do you include places you’ve been to…or just invent as you go along?
For my adult thriller – Sheffield Steel, I wrote about the place I knew. I could see it in my mind as I wrote.
For Lily, I called upon my knowledge of space exploration – not that I’ve been into space LOL! But I’m fascinated with science and history and other boring things.
That’s not boring at all! Lots of us are lovers of history and science- me included, though, I guess, less of the science.

Who is your favorite character in Lily Lovebug and The Unconquered Planet?
There are two I can’t choose between. Wolfie –  is an obnoxious and sarcastic wolf spider – with a sense of humour. Tarpit is a very cunning alien. He’s a sort of minister who manages to ingratiate himself with whoever holds power. 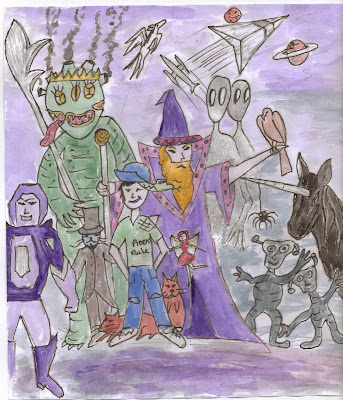 What are you working on right now?
The Secret Train – aimed at Young Adults, it tells how a small group of elite Aryan children are caught up in the Holocaust and forced to learn the truth behind Aryan ideals.

That sounds a fabulous premise, and I’m thinking you’ll be using your knowledge of World War Two facts quite a bit for that one. Good luck with all those project you’ve got in the pipeline, Trev.

Here's a little about Trev:

Born, educated and still living in Rotherham (a small town 6 miles from the industrial city of Sheffield), I left school at 16 years old having received a relatively poor education.  I tried my hand at carpet fitting, microbiology laboratory technician, school chemistry technician and limestone quarrying (where I attained an education to be proud of - an HND in Engineering). A weird interest in watching surgical procedures on TV led to my career as a nurse and my current vocation – Case Manager (senior nurse) at Rotherham Hospital.
It was whilst juggling my nurse training with bringing up two young girls, I started my new hobby; creative writing.
Now whilst pursuing a Masters degree in Managing Medical Conditions, I continue to write children’s fantasy adventures and young adult fiction, and occasionally, dabble with adult crime thriller. I have many projects on the go at once, utilising a somewhat disorganised style of writing where I make up the storyline as I write. It seems to work!

Lily Lovebug and The Unconquered Planet is available from:   http://t.co/EMBC5alP

Thank you so much for being with us today and for bringing those magic illustrations to share with us.

Posted by Nancy Jardine Author at 08:43