FLYING NOT SO HIGH

It's Tuesday again, and this is the third instalment of my Tuesdays in July blogs on using LOCATIONS in novels. What gave me the idea to have my latest release, TAKE ME NOW, have a main base on an island, off the west coast of Scotland? Read on and find out.

Flying not so high.

Up, up and away in a beautiful...? No, I’m not talking about a balloon experience, but a fabulous trip in a lovely little seaplane.

You board this seaplane of ten seats in total-one of them for the pilot. You’re on a little adventure with family members-a husband, two daughters, two sons-in-law, one niece, a brother-in-law and his wife. Someone has to sit in the co-pilot’s seat. Who jumps in to volunteer? You.

What a fabulous experience you’re going to have!
You’ve been in a small plane but NEVER right up front in the co-pilot’s seat! The little seaplane engine cranks to life, and you put-putter taxi straight down the middle of the river-The Clyde in Glasgow, Scotland- and take off into skies that aren’t exactly blue.

Wait! It’s not bad weather that’s the problem…they get a lot of that in Scotland, but not today. The huge pall in the sky (just visible in the photo right) is thick, black smoke. A Victorian warehouse building, just a little bit down the riverside, near the airport, is on fire!

Most of the commercial and passenger flights are either cancelled or are being re-routed, but you’ve got clearance to fly, since you’re low flying, and not leaving from the airport.

Readers may ask why you haven’t canceled but have chosen to continue with the flight, knowing the view will be spoiled for a while, with thick black murk. The easy answer is that the return seaplane flight is only the start, and the finish, to a whole weekend of fun. If you cancel the flight you’d have to cancel your chartered catamaran trip around the Scottish islands you’re having in the afternoon. Your evening dinner reservations at one of the best Scottish seafood restaurants would need to be cancelled as well…and, of course, you’d not be staying overnight at the lovely little hotel in Oban, that nice little fishing town on the west coast of Scotland.

So off you fly!

You’re flying so close to the ground every detail is visible; it seems as though you could touch the grass below you, or the trees you’re flying over. You’ve been told normal flying height around here, in the chartered seaplane, varies between 500 ft and 5000 ft, but since your pilot has to avoid the smoke drift in places, he’s flying pretty low today.

Your pilot does a good bit of snaking up and down the Firth of Clyde, to give you the best viewing, and yet still avoid the worst of the gloom that’s drifting around.

Having banked to the north after clearing the Clyde Estuary you’re heading up the sea loch called Loch Long, towards Gairlochhead. It is a long loch, but that’s not why it has that name. Your pilot’s telling you that ‘long’ is the Gaelic word for ‘ship’-so it’s the ship loch that has access out west to the Atlantic Ocean.


It doesn’t take long, though, to see clearer skies ahead. They’re looking fantastic. Banking slightly southwest again, you’re sweeping in a wide arc to head north, up the longest of Scotland’s sea lochs, called Loch Fyne, famous for the quality of its oyster catches. 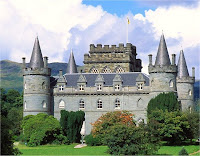 You feel you could almost touch the amazing towers of Inverary Castle as you fly over it-the turret flag ruffling in the breeze as you swoop past.

Your port of call is the town of Oban, often called the gateway to the isles.

Again your pilot gives you a fabulous experience as he snakes southwards,  to make another sweeping turn, before heading north-east up the Firth of Lorne to Oban. Flying at around 1000 ft you’re seeing even more castles. Some are still inhabited but many are not, and seeing them from the seaplane gives you a taster for viewing them at a lower level. Here's another castle on top of this very heavily wooded hilltop. 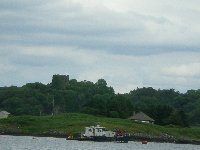 What? Your pilot’s asked you to take the controls for a bit. YOUR ANSWER IS…NO WAY, THANK YOU, YOU JUST CARRY ON…

Your descent down to the island of Kerrera jetty is smooth as a whistle. Just fabulous. Well, this is interesting. You’ve landed on a tiny island across the bay from where you want to check in to your hotel. But you don’t despair-you don’t have to swim across to Oban, since part of the package is the tiny launch that ferries you across the bay.

Whoops! The floating jetty is the tiniest bit wobbly as you transfer from the seaplane to the launch. You find yourself making a mental note to recommend that anyone else following in the footsteps of your experience should ditch the high heels and wear sneakers.

All checked in you make a very swift lunch stop before you embark on your second adventure of the day. The catamaran is also just the right size to accommodate all 9 of you.  OFF YOU SAIL on a 6 hour tour of the nearby islands. Mull is a large island, but you circle around other small ones…and en route you see some of those lovely castles up close that you viewed from the air.

How about this one? This is the inhabited Duart Castle on Mull. 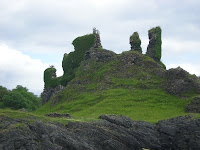 Or what about this ruin, name unknown to your pilot? You totally love the shape of what’s left of this one, and wonder just what it looked like in former days…and who exactly would have lived there?


A fearsome, handsome highlander? Definitely. The stuff of romantic novels.

Get the pencil out!


Do you wonder where I got my ideas from for TAKE ME NOW? Yes, there’s a tinier floatplane featured in TAKE ME NOW…and yes, there’s a renovated castle in TAKE ME NOW…and would you believe there’s also a catamaran in TAKE ME NOW. A pair of hot pink stilettos also feature. Hmmm. Do you wonder how that works? What about that pall of black smoke? Yep! It’s in TAKE ME NOW along with a sassy heroine and a hunky, if incapacitated, hero who needs to be transported to all the places you see above and a whole lot more. And unlike my own adventure I’ve added an adrenaline stirring exciting scene about flying a tiny floatplane in exceedingly bad weather.

I love including a little bit of Scotland in my novels, but I’ve seen many other fabulous places so…TAKE ME NOW also has a bit about London, Barcelona, Tallinn (Estonia), Oman, Paris, the Caribbean-as Aela Cameron, whizzes Nairn Malcolm around in search of a saboteur who has been causing a bit of havoc.

TAKE ME NOW, in print, is now available from The Wild Rose Press.
http://bit.ly/MrlI8x

Thee book formats will be available on 3rd August 2012.

Blurb:
Nairn Malcolm’s looking for the impossible. He needs a highly skilled, enterprising aide who’ll be at his beck and call 24/7. No ordinary Jane Doe will do. He doesn’t expect the only candidate who drops in at his Scottish castle for an interview to be so competent…or so stunning.

Aela Cameron’s got exactly the right mix of talents to satisfy all Nairn Malcolm’s needs, and more. She loves the jobs he needs done, adores his castle, and finds his frenetic lifestyle energising. But she’s only looking for temporary: not to fall in love with the man.

Can Nairn convince Aela she’s tailor-made for him in every way…and not a passing fancy?

Here’s a tiny little snippet from TAKE ME NOW to whet your appetite, a little taste of Nairn, his restored castle, and feisty Aela-a talented woman he can’t resist.
Excerpt:
Unadulterated vigor oozed from every last bit of him—overall a dangerous concoction. Something stirred way-down-low inside Aela again. He was a real honey, and the bee in her wanted to be very sticky.
Her mind whirred. The man bore a vague resemblance to the ruggedly handsome thirty-two year old Nairn Malcolm of the internet photograph, but would the blonde limpet in the recent celebrity snapshot want to curl herself around this forbidding wreck of a man? Aela thought not. She wondered, though, if his blank expression was caused by current circumstances, or if this was his normal demeanor, since he hadn’t been smiling in the photograph either.
With the high granite wall as his backdrop she could easily imagine this man lording over the castle, ruthlessly challenging any invaders to his domain. Taking any woman he wanted? Now there was a thought she was happy to entertain. A tiny smile broke free. Tamping down her crazed imagination she re-assessed him.
What had the guy been doing to get himself in such a state?
Who was he?

Posted by Nancy Jardine Author at 14:02