Getting on with the NEW! 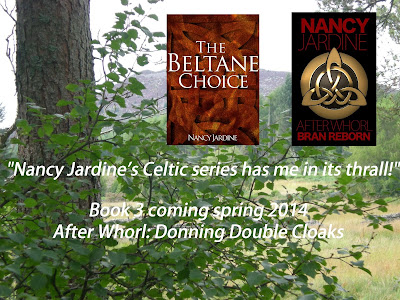 "Nancy Jardine's Celtic series has me in its thrall! "After Whorl: Bran Reborn" is the second in this series, which depicts the little reported efforts of the Celts to rid the country of the Roman invaders. Since they face a very organized and well-equipped foe, they rely on their considerable Celtic wits to undermine the subjugation of the hated invaders. The characters are so well formed, I find myself worrying about their welfare, worrying about their romantic lives, and so on.

I admire the descriptions of battle scenes - male authors tend to be a bit too technical with battle scenes for me. Nancy Jardine describes battles clearly, but also with a look at the emotions of the warrior.

I cannot wait for the third novel of the series, due to launch in March, 2014. Hope the author considers expanding the series even further. A wonderful read, I highly recommend "After Whorl: Bran Reborn!"
Mary Rose

The above review brought some tears to my eyes a few weeks ago. It's the very first, and only review so far on Amazon.com for After Whorl: Bran Reborn, launched on Dec 16th 2013. Beautiful comments like the above for my Celtic Fervour series make me realise why my readers really enjoy my novels. The time period of AD 71-84 is a novelty- a whole different lifestyle portrayed in as authentic a way as possible, given that not much has ever been recorded about that era.

I've just spent some sweat and blood, during the last few days, even though it was NEW YEAR, writing an article on the first Romans to invade Scotland. Is it easy to find information on such an event? Newspaper evidence? Errr. that would be a resounding ...NO.  Yet that doesn't stop me wanting to write about the Celts and Romans of Britannia AD 71-84. Doing some difficult research processes makes writing about this period very worthwhile from my writer's point of view, and I'm so pleased my readers think so too.

If you've read Book 1 THE BELTANE CHOICE or the above Book 2 please drop me a note and tell me what you think of it.

So , it's Day 2 of this brand NEW YEAR and it's business as usual. Well, maybe not quite since there's still a little time to do something slightly different today. Much as I love to go to the cinema I hardly ever get arouind to doing it but later on I plan to make a visit with my daughters. We're always the last to see anything, and know that most will already have seen the recent Hobbit film (if they want to) but that's what we're aiming for this time. I've seen every Tolkein film with them so far when it has been released - there's nothing quite like that big screen and 3D is another draw.

Before then I have to do some sharing of writing already done by me and some new. Have a great day!

ps  - the film The Hobbit: The Desolation of Smaug was fantastic. I didn't find it long at all, and loved every minute which seemed to fly in the constant action. The good looking Elves and Dwarves helped a bit too! :-)

Posted by Nancy Jardine Author at 09:17