Sometimes, it didn't take much for the singing mood to come upon my dad and he would sing away as he worked at something, like polishing his boots- something that was repetitive and needed no actual thought.

Dad had a fine tenor voice, eminently suited for the Burns' songs he loved to sing. On the occasions when he was just whiling away the time of day it didn't matter if he faltered with any of the words of the songs, he'd just keep going with mouth music till he remembered another line or verse. On occasions, when my mum and dad had a gathering of family, or neighbours, in the house- for a special occasion or just a 'get together' - his forgetting of the words was more crucial. He'd get annoyed with himself when he faltered and would look to my mother who prompted him, sometimes singing along with his solo for a few bars. Mum always remembered the words and her contralto voice matched his - albeit in much deeper tones.

He loved all the songs he sang, but his favourites were 'Ae Fond Kiss' and 'My Love is like a  Red, Red, Rose'. Naturally, 'Auld Lang Syne' got a good airing at New Year as did this one...


A Man's A Man For A' That
By Robert Burns

Is there for honest Poverty
That hings his head, an' a' that;
The coward slave—we pass him by,    We dare be poor for a' that!
For a' that, an' a' that.
Our toils obscure an' a' that,
The rank is but the guinea's stamp,
The Man's the gowd for a' that.

What though on hamely fare we dine,
Wear hoddin grey, an' a that;
Gie fools their silks, and knaves their wine;
A Man's a Man for a' that: For a' that, and a' that, Their tinsel show, an' a' that;
The honest man, tho' e'er sae poor,
Is king o' men for a' that.

A prince can mak a belted knight,
A marquis, duke, an' a' that;
But an honest man's abon his might,
Gude faith, he maunna fa' that!
For a' that, an' a' that,
Their dignities an' a' that;
The pith o' sense, an' pride o' worth,
Are higher rank than a' that.


One of my favourite Burns songs is John Anderson My Jo. As a child I learned
a traditional tune version of it, and have always thought it a most poignant, lovely song. Only much later, as an adult, did I learn that some people claim Burns took a well know bawdy song of the time (probably around the 1780s) and put his own loving version to it. (The bawdy version can be accessed elsewhere on the web but not on this blog.)

People have made differing interpretations on what the poem is about. Some think it refers to a love that is everlasting, right to the grave, as a couple age. Others have thought it was written to celebrate the friendship and camaraderie shared by ‘boozing’ buddies. Whatever, I love the words…and I love the old traditional tune.

John Anderson my jo, John,
When we were first acquent,
Your locks were like the raven,
Your bonnie brow was brent;
But now your brow is beld, John,
Your locks are liked the snaw.
But blessing on your frosty pow,
John Anderson, my jo!

John Anderson my jo, John,
We clamb the hill thegither,
And monie a cantie day, John
We’ve had wi’ ane anither;
Now we maun totter down, John,
And hand in hand we’ll go.
And sleep thegither at the foot,
John Anderson, my Jo. 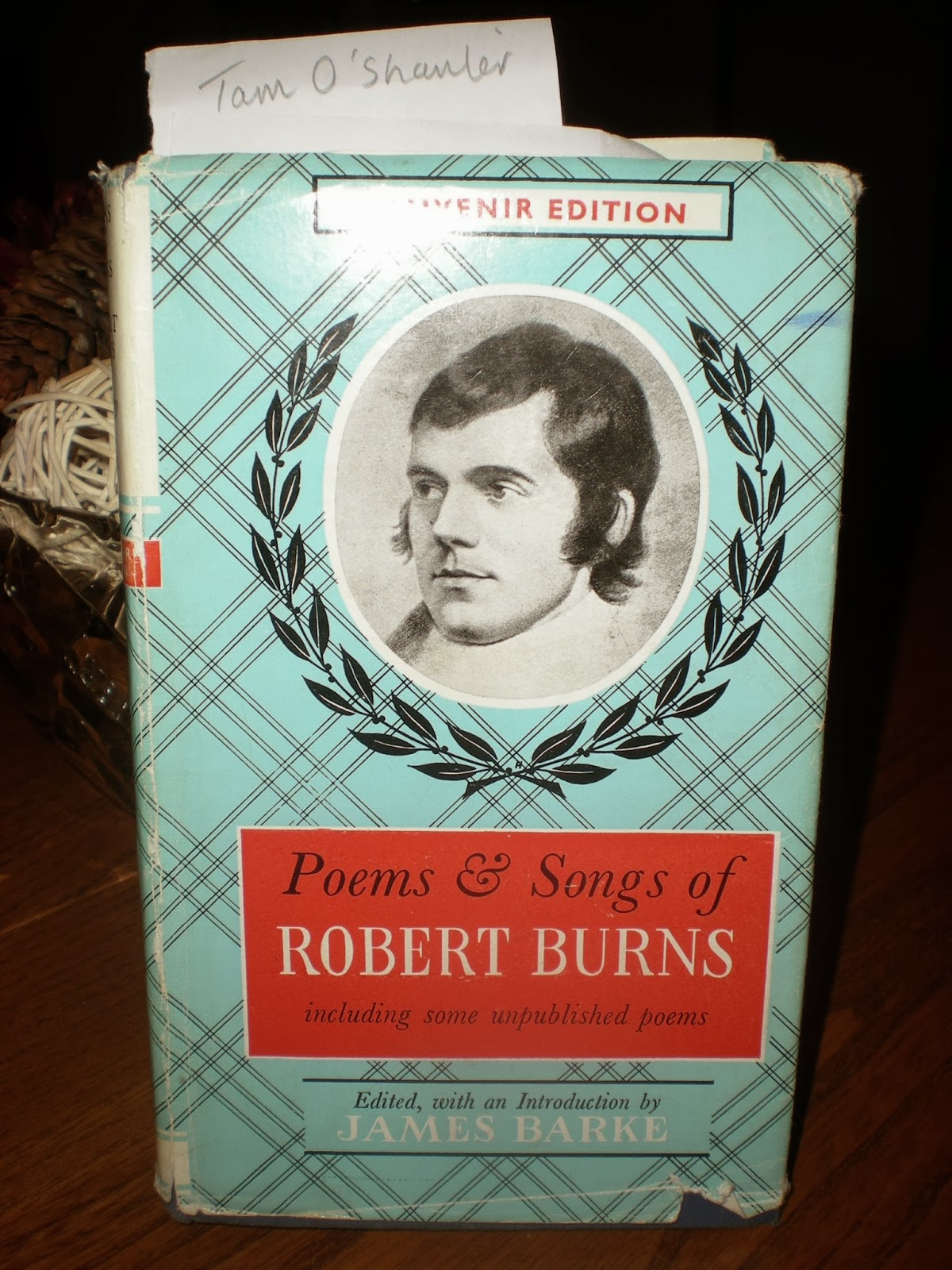 The edition here of the works of Robert Burns was given to me as 'The Headmaster's Prize' for Girls' Vice~Captain, school session 1969-1970. I chose this book as my prize sensing that I would use it in the years to come...and I was definitely correct. It is a well used source!


The wall plaques seen above are plates which I inherited from my mother, who in turn had acquired them via family sources. They are made by Staffordshire potter 'Ridgeway'. They may have been made around 1910 but till someone can verify that, I can only guess. The image of Burns Cottage, Alloway, Ayr,  is as it was back then and now quite how it looks now. It's now part of the buildings overseen by The National Trust for Scotland and is quite spruced up for the many visitors who come to see it every year.

They were two of a collection of Burns plaques but I have no idea how many different images Ridgeway produced. One of those unanswered questions over the years. I only ever remember there being two of them in my mother's house.

Sadly, the plates are not in perfect condition since they have been hanging on one wall, or another, for many many years! The Burns image has a noticeable chip and the glaze on both is a bit crazed. Nonetheless they have hung on my present kitchen wall for the last 25 years and I have no intention of removing them anythime soon!

Posted by Nancy Jardine Author at 18:53