Only 5 days to go to the launch of Topaz Eyes! 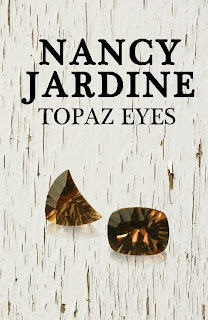 So what is it all about?


A peculiar invitation to Heidelberg embroils Keira Drummond in the search for a mysterious collection of extraordinary jewels once owned by a Mughal Emperor; a hoard that was last known to be in the possession of Amsterdam resident, Geertje Hoogeveen, in 1910.

Who among the progeny of Geertje – hitherto unfamiliar third cousins brought together for the quest – can Keira rely on? Distrust and suspicion among them is rife.

Which one is greedy, and determined enough, to hire thugs to tail her… and worse… as she travels to Vienna and Minnesota?  Can Keira even trust Teun Zeger - a Californian she is becoming very drawn to – as they pair up to unearth the jewellery?

As they follow a trail of clues, will they uncover the full collection before the hired gun kills them? Details remain furtive and undisclosed until danger and death forces their exposure. And who harbours the ultimate mystery item that is even more precious than the Mughal jewels?

Greed, suspicion and murder are balanced by growing family loyalty, trust, and love.

Here's a little excerpt to keep you going...

“Would you ditch the mystery, Jensen, and just enlighten me as to what you think I have that interests you? And tell me why you couldn’t have asked for it in the letter you sent to me? I came here of my own free will – granted – but I’m not hanging around any longer if you’re going to drag this out, for I’m damned sure I’ve no idea what you’re referring to.”
Jensen’s reply lacked emotion, his face a blank screen, his gaze focused on Teun as Keira regarded the by-play.
“Teun. It may come as a surprise to you, but you actually know more about this invitation than Keira. At least you knew from my letter I had something of family interest you might be glad to take back to the USA with you. Keira had no such suggestion made to her.”
Tension rose in the room, which didn’t only radiate from Teun.
Keira sat uneasy, also unwilling to be in the dark any longer. “Would you please explain why you think I may have something you want, Herr Amsel?” She found herself reluctant to use his first name, considering the antagonism now mounting.
“All in good time, Keira. And please call me Jensen. I don’t set out to be anyone’s enemy. I believe each of you can provide access to items belonging to the collection. All the pieces are likely to vary in monetary value but, viewed as a complete entity, it will make an impressive display. It’s a historic set… and unique.”


Posted by Nancy Jardine Author at 13:00