My thanks for another fantastic review for
THE BELTANE CHOICE 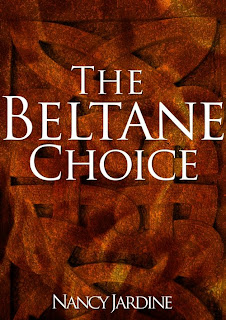 "The Beltane Choice" by Nancy Jardine takes us back in time to Celtic Great Britain in 71 AD. Nancy Jardine weaves a fantastic tale of Nara, a princess of a tribe called the Selgovae who had planned to become a priestess but was banished. So instead she found that she had to find herself a mate before Beltane. As if it was not hard enough to have to find someone to marry, the Mighty Roman armies were marching on their lands and tribes that were not bonded together could not possibly fight off the might of Rome. While Nara was searching for her mate she was taken captive by Lorcan, a prince of an enemy tribe. Many turns for her life and that of the Celtic people begin to fall into place from here.

Nancy Jardine combines several elements into one story that grips readers and pulls them under the spell of an ancient time. Stories of love and war are not new topics to cover and yet the way "The Beltane Choice" is written gives a fresh twist to the old favorite. I loved the way Nara and Lorcan's relationship develops in the story. From the moment they meet there is a mutual attraction that cannot be denied. However, you can also feel the complex emotions they both feel because their tribes are enemies. Nara is a strong woman who is very easy to connect with as a character. I appreciate how Nancy Jardine gives her traits that are so tangible and real. Nara is strong, loyal and loving and she has a sense of humor but she is not perfect. Lorcan is an equally prominent character. He is a strong warrior who has a good sense of self and a mind for what needs to be done with the coming war. However, even that strong warrior sense and loyalty to his tribe is tested in the face of love. "The Beltane Choice" is a book that will appeal to a lot of different readers, all who enjoy ancient history, war, pagan ritual and just a good story.
Posted by Nancy Jardine Author at 17:49