DAY 4 of my blog tour for TOPAZ EYES!

One day to go before the official launch of TOPAZ EYES!

Today you'll find me at Linda Leander's blog where I'll be discussing creating a family tree for Topaz Eyes. We'd love you to pop in!
http://lleander11.wordpress.com/ 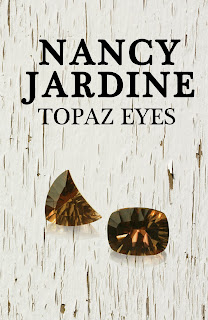 And... here's a little exclusive snippet from Topaz Eyes to keep you going till tomorrow...

Keira’s breath hitched when she glanced at the invitation being uncovered, her eyebrows wincing at the distinctive gilt-edged border and flowery script. This stranger had one of those invitations, too? An invitation which looked exactly like the bizarre one she’d received earlier that afternoon. ‘…you will find it to your advantage to attend the opening of the Myer Gallery.’ A request which should have seemed positive, yet lacked so much.

An icy shiver skittered all over her skin, and lodged deep at the base of her spine. Why would a stranger, who’d randomly sat next to her, have a similar invitation? Heidelberg was a large city. It couldn’t be good.
Coincidence? She couldn’t make herself believe it. The flutters she felt invade her now were nothing like the former desire generated by the stranger; they were of sheer, unadulterated alarm. The invitation she’d been given, less than two hours before, had caused her a lot of disquiet when she’d received it, since it had been handed over in such a peculiar and secretive fashion. That this stranger had a similar card was so weirdly coincidental there had to be something odd going on. Perhaps this American had a sinister motive for revealing it? He could have left it in the soggy wrap. Or was he literally showing his card to lure her into a false sense of security? Her mind ran amok with many possibilities, but all of them alarmed her.

While he stared at the card, her eyes scanned, up and down. She wasn’t sure what she was looking for, but relief didn’t come to quell her panic. Patrons still exchanged noisy talk, and a steady swarm of people trooped along the potholed cobbles, past her table as before, heading for the riverside. None of them looked furtive, yet she couldn’t shake off a feeling of unease.
Why had this American not moved on to another street? Knowing the area from before, it was very likely the next street along would be less crowded. Was it also coincidental he, too, seemed on edge and agitated about something? His concentration was intense on the card as he wiped off the dregs of beer.
The feeling of threat escalated. He didn’t seem like a stalker – though she’d never confronted one. Yet, the man must have followed her, and awaited the opportunity to insinuate a meeting. To gain her agreement to accompany him to the evening event. But why? There had been too many unanswered questions – by the third party organizer – even before she’d encountered this American.
His head turned away to catch the attention of the waiter. Grabbing her purse, Keira pulled out a few euros to pay for her coffee, and fumbled them beside her cup. Slipping neatly around the other couple at the table, she sped along Steingasse towards the towers of the Old Bridge, and blended in with the surge of tourists. She ignored the man’s plea and shouted apology. Let him believe she’d been annoyed at being drenched with beer, but she wouldn’t stay one more minute.
Posted by Nancy Jardine Author at 12:30