Once Upon a Weekend

I welcome Tina Swaysee McCright, today. Her short story- Once Upon a Weekend - was published recently by The Wild Rose Press. Here's a tiny snippet for you get an idea... 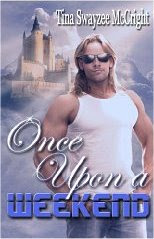 Sometimes a curse is really a blessing...When Hannah Lawrence agrees to manage a hair salon in a castle, she doesn't expect fairy tales. Then she finds herself alone in the salon with the owner's hunky brother, and magic sizzles between them. But can she forget her past long enough to embrace it?

Contractor Tate Browning doesn't believe in magic. But when he makes the wrong comment to the wrong witch, his hair starts growing fast and won't stop. He's determined to finish the work he promised his sister--but how can he concentrate with the salon's beautiful new manager around?

When Hannah discovers that Tate must prove himself worthy three times to remove the curse, he refuses to believe it--but magic cannot be denied. Will Tate and Hannah need a fairy godmother to find their happily ever after?


Posted by Nancy Jardine Author at 10:41