This post will be part of a series of blog posts to reflect on my journey to publishing The Celtic Fervour Series during the course of the last nine years. (Gosh, has it really been that long?) My memory has always been of the type that can dredge up facts when the topic is current, so, since I intend to move on to the Victorian era from my next work in progress, I'll need memory jogs for the Celtic Fervour Series. 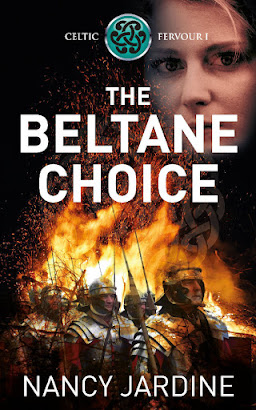 When I wrote The Beltane Choice – Book 1 of my Celtic Fervour Series saga – I had priorities for my characters and the setting of the story, though at the time I wasn’t really aware that my choices might prove difficult at the classification stages. I was an avid reader. At that point of 2011, I had retired from upper primary teaching and as such had always been writing something. However, 2011 was the point when I decided to become serious about novel writing with a view to becoming published.

My intention for The Beltane Choice was to write a tale of a relatively ordinary clan, set in an era of great turmoil when armies of the invading Ancient Roman Empire were decimating any Britannic tribes who were resistant to adopting Roman rule and daily ‘Roman’ lifestyles. The setting was northern Roman Britain, chosen because I’d rarely come across published novels set during the first invasions of the barbarian north of Britannia. (Ancient Romans termed everywhere that was not included in their empire boundaries as barbarian)

Research gleaned virtually nothing written about Brigantia (present day Cumbria/Yorkshire/Northumberland), and even less about over the high hills into the barbarian territory of the tribes of Caledonia (modern-day ). I discovered Brigantia had had a ‘’ status during the rule of the Brigante Queen Cartimandua, who made deals with the Ancient Roman Empire (somewhere after the Claudian invasion of A.D. 43 and A.D. 69). But since I’d read at least one novel which included Cartimandua as a main character, I decided not to write about her or any ‘documented’ northern King, like her ex-husband Venutius – though they are mentioned in the story. Not having a historically-known main character means there are some who would not regard my novel as traditional historical fiction.

The Beltane Choice would be about tribes who would normally be at war with each other. They would need to unite to fight the Ancient Roman invading scourge together as a stronger force, though what might unite them?

In A.D. 69, the Brigante federation of tribes was enduring a civil war where forces loyal to Queen Cartimandua were fighting against forces of her ex-husband King Venutius. The itself was also in the turmoil of civil war, but when General Titus Flavius Vespasian became emperor (A.D. 69) he took firm control. By A.D. 71, Vespasian’s Britannic empire expansion was well underway and Brigantia was invaded with gusto!

A.D. 71 became my start point for The Beltane Choice but who would be my Celtic clan? I got out a current Ordinance Survey map and looked at the area that would have been northern Brigantia in A.D. 71, the territory which most likely would have bordered the tribes of southern Caledonia. (The only mention of tribal names for these locations wasn’t actually documented till around A.D. 130-150, when the mapmaker Claudius Ptolemaeus wrote down his map references) Ptolemy’s information records the tribes to the north of Brigantia (i.e. those in Caledonia) as being the Novantae, Selgovae and Votadini from west to east, north of what’s currently named the Cheviot Hills. I decided my main female character would be of the Selgovae tribe and the main male character a Brigante.

I searched current north Yorkshire and for suitable remains of a Celtic hillfort and settled on the name Garrigill for my Brigante clan. Similarly my O.S. map indicated a Celtic hillfort in the vicinity of Tarras, so that was to be my Selgovae hillfort.

My inclination was to write a historical fiction novel, but when I did some internet research I could see that if  The Beltane Choice have strong elements of romance, it might be more publishable. It turned out that when I sent that 2011 written-manuscript to a US ebook publisher it wasn't 'romancy' enough.

However, even with the addition of those more explicit (though not erotica) romantic elements the 2012 published version was still too heavy in historical detail, with too many important secondary characters ,to be termed a historical romance. The first publisher of The Beltane Choice marketed it as a historical romantic adventure. The reader needs to decide for themself what the classification should be…

Meanwhile my current problem with The Beltane Choice, and indeed all of the novels in The Celtic Fervour Series, is what categories should it be listed under on Amazon. Some dedicated romance readers absolutely adore the novel and the characters in Book 1, but seem to find the reduced romance levels in Books 2 onwards less satisfying. I've had reviewers of the series tel me in reviews that they like Books 2 onwards because they are less romantic.

Readers are so interesting for the very reason that they can have such variable likes and dislikes!

Posted by Nancy Jardine Author at 14:06