Anniversary of the death of Agricola!

Today is the 23rd August and on this day in AD 93 General Gnaeus Iulius Agricola died.

The information we have about Agricola's death is according to his son-in-law Publius Cornelius Tacitus. The writing of Tacitus, referring to his father-in-law Agricola ,is sometimes regarded as biased but it's virtually all that's a known original source.

Whether, or not, Tacitus in his 'Agricolae' is exaggerating is difficult to prove ,but his hints indicate that Agricola died at his Narbonensis estates on the 23rd Aug AD 93 (present day Frejus, fairly near Marseilles)  His death occurred when Agricola was only 53. It had been approximately eight years since his tenure as Governor of the Province of Britannia was terminated, and Agricola had been recalled to Rome by Emperor Domitian.

Tacitus, and subsequent ancient writes who probably used Tacitus' information, hint that doctors of Domitian visited Agricola prior to his death. If that happened ,it may have been for positive reasons but the inference in Tacitus's work is that the reasons were more likely to be nefarious.

Even the idea of that is interesting because we know almost nothing of what Agricola did after his job in Britannia was over. Tacitus claims that Agricola was offered a post in the province of Africa but exactly what is not known. What Tacitus says is that Agricola refused the offer. Either because it was dangerous to his life, or that it was an offer that was beneath him. Agricola probably should have been lauded for 'conquering' a lot more of Britannia than his predecessors had done. However, that accolade seems to have not been conferred on Agricola whose tenure as Governor of Britannia was probably the longest during the early part of Roman occupation.

In my recently launched novel, Beathan The Brigante, General Agricola is somewhat nervous about returning to Rome, having been recalled by Emperor Domitian. He reluctantly makes his way south from Taexali territory in northern Caledonia,in no great hurry to get to Rome. 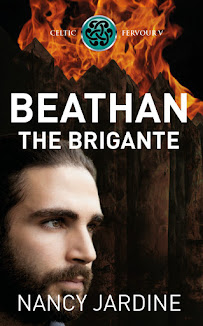 Here's a little taster from the novel. At this point of the story Beathan has managed to be free of Agricola's clutches in Rome only to find that back in Britannia he is captured again and held in custody by Agricola's second in command, the Judicial Legate Gaius Salvius Liberalis.

Beathan felt the power of the man when Liberalis stood before him fully armoured. The man’s polished helmet poised on top of the uniform stand drew his gaze, and his awe. The metal ornamentation was even more impressive than Agricola’s, and though more battered the general’s helmet had been stunning.

“You have given me a problem I could well do without, Brigante Beathan.”

He stared. It was not a question, so he gave no response. He had plenty of problems of his own.

Beathan absorbed the terse tones and tried to interpret the legate’s words. Although the room was cleared of his staff, it was possibly not a totally private conversation.

“You mean that the Legio II Adiutrix has been recalled to Rome to go to fight a…less cunning enemy?”

He nodded since Liberalis’ expression seemed to indicate it was necessary.

He dared to add a little more. “I have heard that the Legio IX, and the Legio XX, have also been withdrawn from Caledonia. From all of the northern forts.”

The legate’s expression was calculating. “You learn the most fascinating information, Beathan the Brigante. Perhaps General Agricola was correct and that you do need to be handled very carefully.”

He chose not to reply. Handling was something he had plenty of experience of.

“You have seen many of our forts but not, I think, Pinnata Castra?”

He had heard about that one from Ineda of Marske, his Uncle Brennus’ hearth-wife, but he chose to only nod.

“Agricola was very proud of that fortress.” Liberalis sounded reflective. “I believe he would have liked to show you it.”

He found he could not hold back. “It has also been abandoned?”

Liberalis’ chuckles were bitter. “I am glad he was not there to see his beloved Legio XX leave.” The legate’s smile became snide. “You, on the other hand, might have been impressed by the situation.”

The glare that came his way made Beathan refrain from asking any more questions.

Liberalis’ tone dipped again. “Like General Gnaeus Iulius Agricola, past Governor of Britannia, I am also recalled to Rome. Though unlike Agricola, I will be embarking a ship well before Londinium, to take me to the shores of Gaul.” Liberalis’ voice quietened to a rasping whisper, as intense as his stare. “Agricola and I share a friendship and probably the same fate. But presently, I have no desire to leave any unravelling threads which he saw fit to loosen.”

Beathan felt his throat seize up. What was the man talking about?

The reference to withdrawal from Pinnata Castra (present day Inchtuthil Roman Fortress, Perth and Kinross, Scotland) is also written about in my short story involving a different Garrigill Brigante- Ruoridh, who is Beathan's cousin. If you'd like to read about my fictitious withdrawal from Pinnata Castra you'll find the short story - The Pinnacle of Achievement-  in the Ocelot Press anthology 'Doorways to The Past'.

And...here's the link for Beathan The Brigante.

Posted by Nancy Jardine Author at 21:49