Out and about signing and selling books!

Happy Saturday to you!

After the rivetting General Election frenzy in Scotland and the United Kingdom which led up to the election day on Thursday 8th June 2017, I thought that going to my FOCUS (Festival of Crafts Unique to Scotland) craft fair venue today in Inverurie Town Hall would have been a refreshing break from politics. 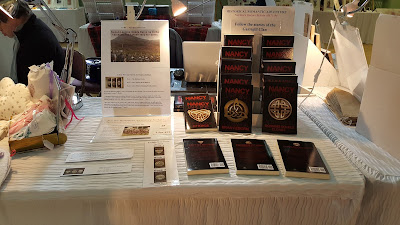 A crafter had to pull out at short notice so I was given extra table space and was able to spread myself out around a corner instead of squeezing a heap into a small area.

One browser (he had no intention of buying but was bored because his wife was taking ages to look at the other crafts on sale) engaged me in conversation. This happens often and I tend to let conversations develop if there's a lull in footfall since they often make the time pass beautifully. Today's (ex-military man according to him) mannie from Aberdeenshire launched into politics in his sentence 2. 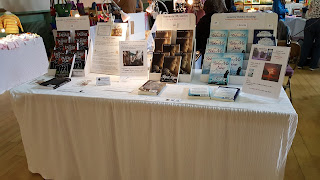 Since I'm very interested in what made thousands of voters in my part of Scotland (Aberdeenshire) vote Conservative, I was interested. Suffice to say after a couple of minutes I knew that the newspapers he is likely to read are not those I tend to reach for and I await with baited breath to see what unfolds between Ruth Davidson-whom he had a lot of admiration for- and Teresa May's (UK Prime Minister) alliance with the DUP (Democratic Ulster Unionist Party) since some of their views don't seem to conform to those of Ruth D. He was definitely an 'SNP bad' supporter and nothing that the current Scottish Government did was good, even issues wholly devolved to the UK Westminster Government over which the Scottish parliament has absolutely no say. The conversation remained polite though as I truly would like to learn why someone's views can be so different to mine. 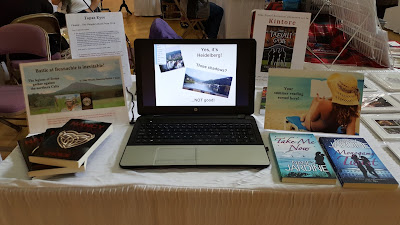 It was just as well that on one of the extra tables I set up a 'Power Point' presentation about my books that provided another focal interest while I was busy talking to browsers and customers.

I'm delighted to say that other wonderful conversations were brilliant and I met two men who know a lot about General Agricola and his Ancient Roman advances into Aberdeenshire back in c. A.D. 84. As a bonus to the very encouraging conversation  I got a few references to material I haven't yet read and could be very useful in my studies. RESULT!
...and they bought some books as well.

When totted up I only sold 7 novels today but the leads for me to interested heritage groups and useful research materials means a block of time well spent.

I think I've earned a break so I'm now going to catch up with the 'Versailles' episode I missed on TV last night.