It's still Sunday but here are my thoughts on the first novel I've finished in June and posted a short review of on Amazon and Goodreads. 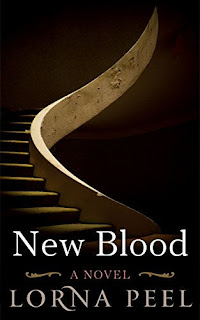 New Blood: a romance with a twist by Lorna Peel
(published by Crooked Cat Books)

Ah, to be an aristocrat with a stately pile and a pile of money as well. I’ve read a few books about the other type of aristocrat who is land rich, with a stately home needing constant repairs, but whose bank account is also sadly in need of propping up. Baron Thomas is one such titled owner who needs to open his home to tourists like me who love to visit. His new tour guide Sophia, a local lass who returns to her roots, is able to put up with his volatile temper and his innate shyness. The romantic development is slow and steady as the story progresses. The characters are interwoven in a quite refreshing way and unravelling the mystery kept me reading. I love stories with an ancestral theme so slotting the characters into place was great as the story developed. I warmed a lot to the irascible Thomas though he also came across as a bit wimpish at times. Sophie, on the other hand, was nicely rounded. There was that one character who (I’m choosing not to name in this review, so as not to spoil it for a new reader) was so well drawn as the baddie but was also the one who made me really perk up when she joined the conversation. Other secondary characters gave a lot of life to the story.

Posted by Nancy Jardine Author at 20:19