Another of last week's reads!

Some more Monday Moments with another book I read last week.

This time it's a non-fiction book- The Roman Conquest of Scotland The Battle of Mons Graupius AD 84 by James E. Fraser. 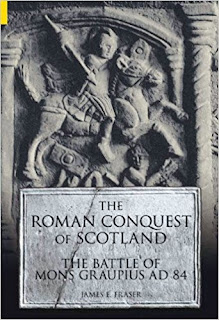 I’ve read a good number of books now about Roman Britain though my particular focus is on Roman Scotland so I eagerly reach for anything new to me. The author of this book is one of the few I’ve encountered, so far, who adds something to the personality of General Gnaeus Agricola. James E Fraser’s interpretation of the ‘Agricola’ by Tacitus is broken down into small phrases which he backs up with any other record available to him. There were aspects to this book that I’d not considered before, or read in other texts, and these are worthy of another re-read.

The author presents his conclusions in a way that reaches out to someone like me who is an interested researcher and not an official historian or archaeologist. I don’t, however, agree with his reasoning in places. Though he mentions the advance marching camps of Agricola which lie to the north of Raedykes I don’t feel he has given them sufficient consideration, yet I understand that a study of the campaigns of Agricola are conjectural at best.

The Gask ridge definitely covers a large area that’s peppered with many identified Roman installations, and other potential ones, but for the Battle of Mons Graupius to have been sited there makes me wonder why Agricola would have continued northwards with an extremely large compliment of soldiers. The approximate head count of soldiers at Kintore temporary marching camp is estimated at about 10 thousand ( Murray and Cook excavations 2000-2004) and the potential at the next three marching camps to the north east are upwards of 20,000. If Agricola had subdued the natives on the Gask Ridge would he have needed to march so many of his men northwards afterwards? Or if his march occurred before the battle why wait till so far south to confront the natives?

I continue to be fascinated by the campaigns of Agricola, the writings of Tacitus and the Battle of Mons Graupius!