#Monday Moments with the ancients

My #Monday Moments don't feature any author, or any novel written by someone else. 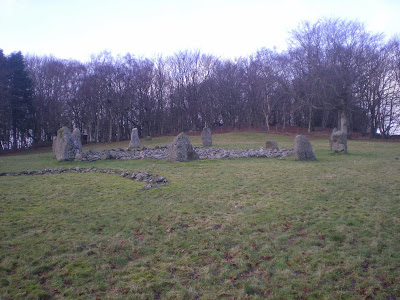 The visit was a delight as I was given a tour of the school-the actual buildings only slightly different from my earlier visits. The interior was bright and  interesting: colourful work of the pupils displayed around the premises. 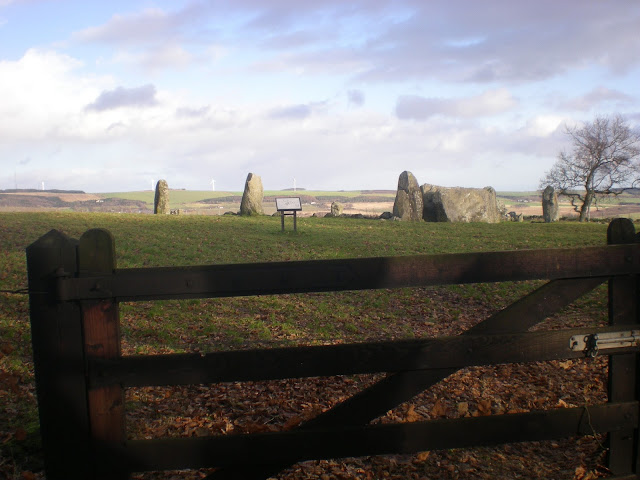 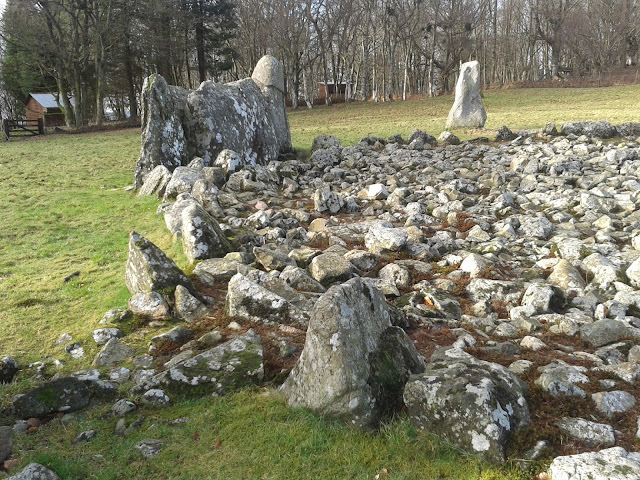 Erected nearly 5000 years ago the stone circle at the Loanhead of Daviot is a magnificent example of a recumbent stone circle. The distinction for this category is a large recumbent horizontal slab set on its edge, flanked by two upright stones (one of which has a broken off top). Though it is clearly a finely preserved example, the north-east of has around 99 stone circle sites officially documented. 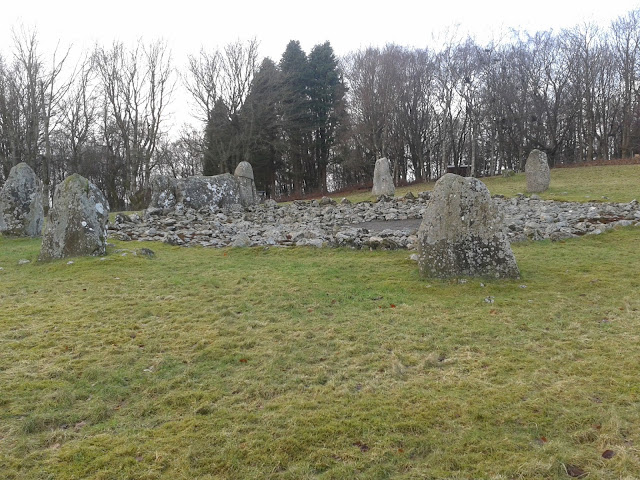 The site comprises of two concentric circles with a central cairn. The outer circle is formed of 10 monoliths, the size of them increasing from the north-east towards the recumbent stone. Prior to excavation in 1934, five of the uprights had fallen over. They were re-erected in the upright position.  The site provided evidence of Neolithic beaker Age, Middle Bronze Age burials and Iron Age burials and occupation. 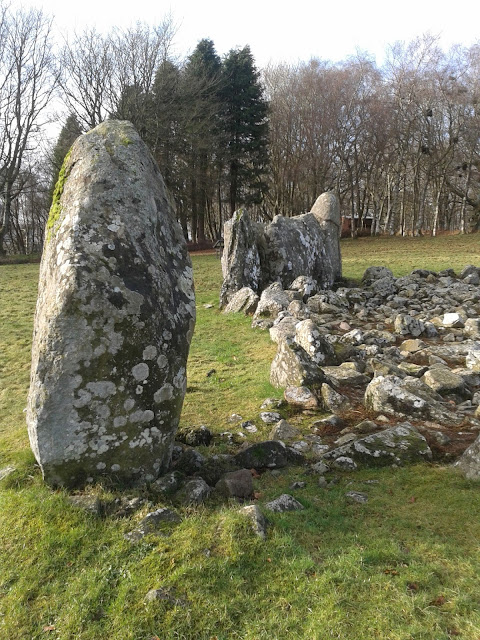 Evidence of cremated remains was found at the base of the upright stones.

At some time following its construction the interior was burned, possibly before the site was used for burials, the area was later filled in with a cairn of smaller stones bordered by larger boulders.

It’s thought the recumbent stone circle was used as a religious site during the Neolithic period some 4-5 thousand years ago, perhaps used for observing the moon. The seasons would have been noted by the way the moon was visible thorough the parts of the circle. One of the stones flanking the horizontal recumbent stone has twelve cup marks on it, which are thought to have been carved out during some religious rite performed there.

The land around the stones was farmed by the local people - some of their tools and other burials have been found in adjacent fields. 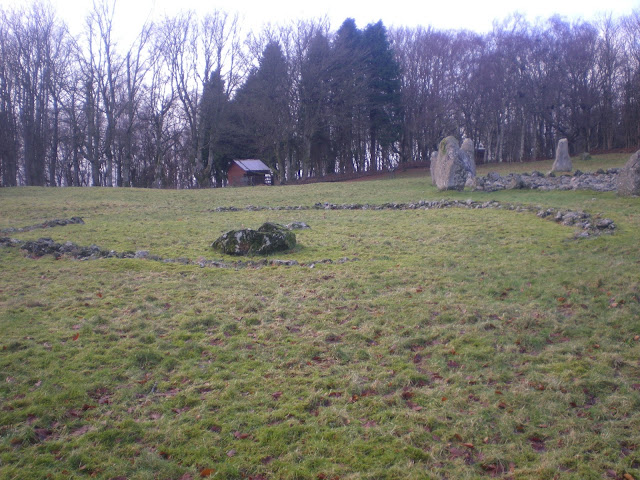 An adjacent circle of low stones denotes the area used as a cremation cemetery much later than the stone circle was erected - perhaps c. 1500 B.C. This cremation circle cemetery is similar to some found in southern . It’s thought that a small ditch was made around the area during medieval times but that has eroded over the centuries and the area now marked by small boulders. In the interior, cremated remains were found of upwards of 30 people of varying ages, the burial site having been used till the late Bronze Age c. 500 B.C.  The ashes of some were found in beakers; some other in laid out graves. One partially cremated male was found holding a stone pendant.

Somewhere around the Middle Iron Age, approximately 500 B.C., the area was used for metal working.

I'm not writing about anything during the above time periods but it was interesting to remind myself of just how visible Mither Tap of Bennachie is from the stone circle at Daviot, Mither Tap of Bennachie featuring highly in The Taexali Game and in After whorl: Donning Double Cloaks (Bk 3 of my Celtic Fervour Series). It's hard to spot Mither Tap in the distance the photo below because of the tree cover but it's the curved shadow directly behind the gate at the centre of the photo. 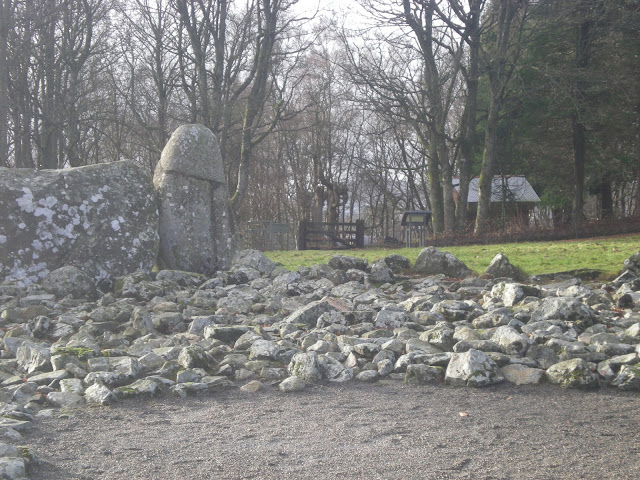 Having walked down the track back to the car park, what confronts you is this view of Bennachie from the edge of the woods. 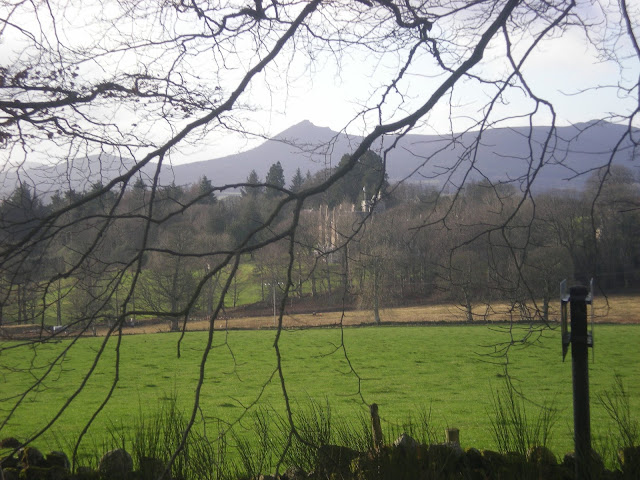 I'm inspired now to incorporate the location into my current WIP- Book 4 of my Celtic Fervour series. It's easy to imagine either my Celts using the site to spy on the troops at the Roman army camp at Durno, or the Romans occupying the location knowing it to be a revered local site.