Familiarise Friday meets Rhia Ashton from Monogamy Twist.
Monogamy Twist is an ancestral mystery, a weird Dickensian-style bequest where a dilapidated old English mansion lands in the lap of someone who hasn't a clue why he has been chosen for the honour. Luke Salieri, the beneficiary, aims to find out why Amelia Greywood has given him the Hall and 'contracts' Rhia Ashton to help him find the answers. The bequest has some very weird conditions which have to be met, but let's meet Rhia... 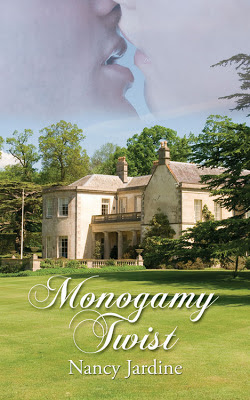 I’ve managed to catch her in one of the upstairs rooms in the fabulous old house called Greywood Hall that you see on the left. She a  fascinating, and very busy, lady but she’s agreed to stop and answer some questions for me.

Hi Rhia. How are you today?
I'm feeling absolutely wonderful, thank you. I'm so excited about what I'm doing at Greywood Hall that I'm almost bubbling over!

Yes, I've heard a little about this incredibly weird and antiquated contract that you've signed. It's quite strange for this day and age!
I know, I'm still stunned that I've said I'll marry Luke Salieri in a few days, but I just couldn't pass up the chance to research this fantastic place for a whole year.

Even though you didn't know the man a week ago you've said you'll marry him and live with him as his wife and researcher for a whole year? 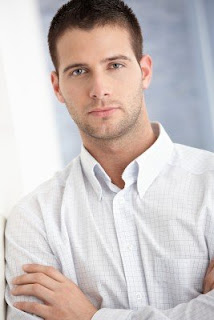 I know it's totally crazy, but I've said yes and I'll do it! He 's the most gorgeous man so I don't think being his wife will be any great hardship. Well, would you not want to marry him if he asked you? Just take a look! And researching Greywood Hall is my ultimate dream job. It couldn't get any better than being the sole person in charge of cataloguing and handling the contents. It's like a mothballed museum in there.

If that's Luke contemplating you then I really don't think you'll have a problem with living with him. Resisting him will be something else, though.

But no digressions or daydreams about Luke Salieri. Back to the interview. For my readers I’d like you to describe yourself using only 6 words.

You've got a dog, haven't you?
Here's my Thor.  He's a huge Irish Wolfhound, but he's a great big softie. Just as well Luke likes him, or I'd have a problem because there's no way way I'd have given up Thor for anything. 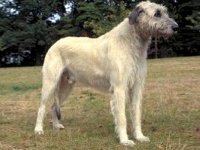 Where are you from, Rhia?
England. I’m originally from the south, but moved around the Home Counties when I was younger. My parents divorced when I was quite young and I lived with my mother. When she changed jobs we tended to move closer to her work, to cut down on her travel. I spent term time with mother, and most of my school vacations with an aunt, or my maternal grandparents. Sometimes my aunt brought me up here to Yorkshire, mostly to Border Cottage.

I know you're working here every day at Greywood Hall, but where are you currently living?
I’ve got a long lease to rent Border Cottage, right next door. It’s a tiny little place but I adore it and it holds a lot of great memories for me.

That’s the pretty little cottage just before the main gates to the Hall?
Yes! That’s the one.  It’s only a step away from here.

Apart from your cottage, what would be your most favourite place in the whole world?
Last week I would have said I don’t really have one, but now that I’ve actually been inside Greywood Hall that is my absolute dream place. I know it’s a bit dilapidated, and it needs a lot of work done to restore it, but it is the most fascinating house. It’s like it’s been bubble-wrapped in cobwebs and left to sleep for many, many decades. There are so many wonderful things to touch, and to research, it’s just heaven for me. And Luke wants to move into Greywood Hall when enough of it has been renovated. That'll be so exciting!

Who would be your ideal holiday companion if you took off on a sudden unplanned trip?
Again, before last week I’d have had trouble answering that question- apart from taking Thor, of course. But now that I’ve met Luke he would be the one.

I'd definitely take him, too. But back to your work. What’s your main occupation just now?
I’m a historian and a family researcher. For the last year or so I was building up my internet family researching business, but as of last week Luke has given me the tremendous opportunity of researching every single thing in Greywood Hall. I’m so excited I hardly know where to begin. No. Scratch that! I’m a professional so I really do know where to begin, but it’s a dream come true for someone like me to do it- even though I’m highly qualified for it, and used to work for the Victoria and Albert Museum in London as a researcher. I'm babbling but so thrilled by it all.

Are you a gadget freak, or a technophobe?
Probably neither. I use the internet and various computer resources for my researching, but I can’t say I’m really a technophobe. I only learn what suits my needs and work with those till I require something else to help me in my work. As for a gadget freak? If it’s an old gadget that’s got amazing technical merit for it’s time then I’m all for it. I’d research everything about it and will wax lyrical about it.  Really new gadgets I steer clear of.  Hey! I’m a historian after all.

If you were granted a whole week where you can choose every single thing you want to do what would you do?
Well, there would be three big things.
First thing: I really want to crack the mystery of why Amelia Greywood left the Hall to Luke. He had never heard of the woman yet she bequeaths him such an incredible place. Wouldn’t you want to know why as well? The answers have to be somewhere in that wonderful house, but to find that answer I’ll have to get to know Amelia first.
Second thing: It would be pretty much what’s been happening to me during this incredible and amazing past week. I’d continue to work over at Greywood Hall. The research over there is going to take me the whole year I’ve signed a contract for, because there are so many artefacts of historical note. But as well as working on the cataloguing of the interior contents I’d want to be sure the first renovations to the Hall will not damage anything. It’s such a wonderful place it needs to be really well restored to grandeur.
Third thing: Maybe this should actually be the first thing? I want to learn everything there is to know about the man I’ve got myself temporarily hitched to. Luke Salieri is the most incredible lover, and I’m already way under his spell even if to him I’m just a ‘convenient’ and legal wife for just now. He's got me totally snared in his web!

I can't help noticing that you're looking a bit edgy just now, peering at the door. Are you just keen for me to leave? Or is there someone, or something, that you're trying to avoid just now?
Right this very minute I’m trying to avoid Luke. Just so that I can get some work done, you know? We’re at that stage of a relationship where it’s all so new and novel that every time he looks at me all we want to do is make love and not stop! It’s such a fantastic thing, and it’s never happened to me before like this, but I’ve also contracted myself to do a research job and when I sign on a dotted line then I mean to fulfil whatever that condition is! The only problem is I keep wanting him to disturb me as well...oh dear...

I think we'll skip any more details if you don't mind. Any interested reader can find out in the book. It's pretty sensual isn't it?
Oh, it's definitely sensual. Luke just can't keep his hands off me and ...I guess I'm pretty much the same.

One last question. What new cuisine would you like to try?
I’m quite happy to eat in at my cottage, but I can already see that Luke likes to try out the local restaurants every night. We don’t have a huge variety around here, since it’s a very countrified area, but there’s a new restaurant opened up not too far from here that serves five different types of Far Eastern cuisine. I quite fancy the Indonesian section first. I eat anything and everything though, not fussy at all.

Well, Rhia. Thanks for the great interview and good luck with finding out why Amelia left Greywood Hall to Luke, and the best of luck with the rest of your weird contract. I'd hang on to him if it were me, but a girls' gotta do what a girls gotta do!

See the tab above to sample Chapter One of Monogamy Twist.

Luke Salieri thought he'd seen everything. But when he inherits a dilapidated English estate from a woman he's never heard of—and with quirky conditions besides—it’s a mystery he wants resolved immediately. There must be a woman out there who can meet his needs. But how far will he have to go to persuade her? Lucrative employment for a whole year? The job of researching the old house and its fantastic contents is enticing – but Rhia Ashton can’t see herself living with gorgeous Luke Salieri and not wanting his body as well. Can she live and sleep with him for a whole year and then walk away? Rhia has her own ideas about what will make it worth her while.


All images used are from www.123rf.com

Posted by Nancy Jardine Author at 11:58